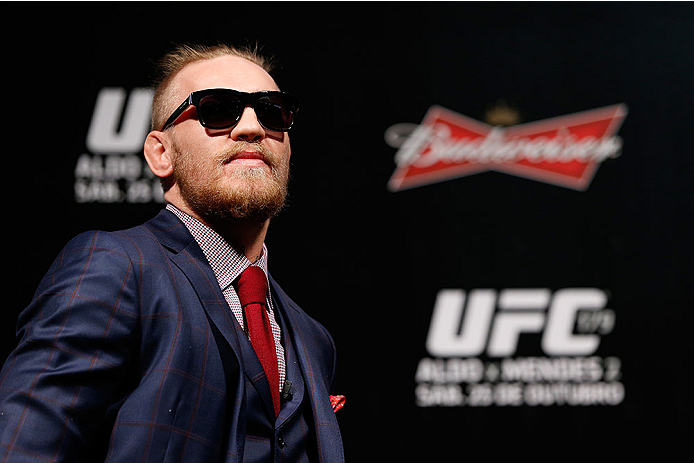 Everything changed in the UFC on April 6, 2013, the night Conor McGregor stepped into the Octagon for the first time against Marcus Brimage. Since then, the brash Irishman has captured the imagination of the fight world, and whether you’re with him or against him, odds are that you can’t stop watching to see what he’ll say or do next.

On Sunday, January 18, “The Notorious” one headlines a UFC Fight Night event in Boston against Dennis Siver. With a win, he will get a crack at featherweight champion Jose Aldo, but before the bell rings at TD Garden, let’s revisit some of Mr. McGregor’s most notable quotes.

PRE-HOLLOWAY
“One year ago, I was walking around like I was the King of the World, like I was the UFC champion, a two weight champion. I was where I am now. I always knew and I always believed that my time would come. Give me one shot, give me one chance, and I’ll steal the show and put the spotlight on martial arts in Ireland and on my gym, and that’s what happened. I visualized it so much that I believed it was happening, and one year later, it is happening. It shows me the strength of the mind. Now I see myself as the face of the UFC, the headliner, the champion, and I’m just gonna keep that belief, keep showing up in the gym, keep outhustling everyone else, and get to the top.”

SURPRISED?
“It hasn’t surprised me. I set my standards high, I aim high, and I was expecting this. As soon as I got the contract I knew this was gonna happen, I knew I have something that people want to see. I don’t quite know what it is and I can’t put it into words, but people tune in, they see me once, and they will tune in every time after that.”

EARLY DAYS
“We were only kids. Our pro team was three people deep at the time. Two featherweights, and (UFC vet) Tom (Egan) was a middleweight at the time. It probably happened a little bit too soon for Tom, but it gave us valuable experience and showed us that it was within reach if we dedicate ourselves to it, and that’s what we did.”

OPPONENTS
“There is no opponent. I’m emotionless to it. The name on the contract has changed, but my emotions have not, my training has not, my approach to the fight game has not. It’s just another body to me, a new set of movements, a different body type. I don’t really dwell too much on the other guy or the opponents; this is my show…You could put me in there shadowboxing and I’ll still sell it out. It doesn’t matter who the other guy is. This is my time.”

EARLY DAYS II
“This was all going on in my head even when it wasn’t going on. I always felt like I was this guy, I always felt like there was big hype around every fight I was fighting, even though I was fighting in front of 20 people in a little club hall somewhere. I always felt like it was a world title fight. So now that these things are actually happening, it just feels like normal to me. I know once that door shuts, that’s when I perform, that’s when I arrive. I’m confident in my ability and I let my fighting do the talking. And I’ll do a little talking myself also.”

FIGHTING IN DUBLIN AGAINST BRANDAO
“It’s just another day for me. I’ve been the star since Day One. It’s just another day in the life of a king, and it feels normal. Everything is the same. In my head it was always like this, no different. And I’m going to perform like that as well. People think there’s pressure; I don’t feel pressure, I never did. I’ve been in a UFC main event every fight of my career.”

ON HIS PRO DEBUT
“My very first fight, I was the first guy on the card, 50 people in the place, and to me that was the UFC main event. I wore a robe out, had a hood up, and that was a world title, a packed arena. Who can tell me otherwise? If that’s the way I feel, and that’s what I see, then that’s the way it is. No one can say any different.”

LIFE MOTTO
“One of my favorite things to do in life is say I’m gonna do something and then go out and do it. There’s no better feeling for me than doing that. It’s a beautiful thing.”

WORK STUFF
“You couldn’t possibly have done more media than I did in the lead-up to that Dublin fight; it was impossible. That (Dublin) for me was a warm-up for every other show, to get me prepared so I have a feel for what a big time show is and what it means when you are the star attraction. I feel comfortable, it’s a part of the game, and do I love doing it? Not all the time. Obviously I would rather just get in and fight, but this is the nature of the beast, and we must partake in this.”

THE FIGHTING IRISH
“Of course, boxing has a big imprint in Irish culture. We’ve got former world champions and Olympic champions. I admire all our boxing greats that came through our country. Steve Collins was one of them, and he was probably our main one. Bernard Dunne most recently, and our Olympic champion Katie Taylor, she’s probably the best female boxer on the planet. But at the end of the day, I didn’t get into this game for sport. I got into this game to be able to defend myself in any situation, so ultimately sport is not what interests me. I train for no limits, no restrictions. That is what led me down this path. So I respect the road that boxers took in the boxing community, but I am on my own journey here.”

A BEAUTIFUL THING (PRE-POIRIER)
“Maybe some people might consider it (fighting) a lonely thing. Me personally, I consider it a beautiful thing. I love being here alone, traveling from country to country, beating up people from different countries. My last fight I beat up some kid from the favelas, and now I’m heading to Vegas to beat up some hillbilly from Missouri. It’s crazy to me and I love doing what I’m doing.”

FIGHTING IN LAS VEGAS
“I’ll fight anywhere. I’ll fight in this hotel room right now. If the money’s on the line, if the belt’s on the line, let’s do it. Anyplace, anywhere. But as I go through these experiences, I embrace these things. Fighting in my hometown, it was a dream come true, and of course fighting in the MGM is a dream come true. These are things that people who compete in combat sports dream of getting to. So of course I embrace it as it’s happening, but I’m trying not to get too caught up in it. I feel I really have tunnel vision through it all. I’m going along, doing my thing, taking note of where it is and being grateful for it, but ultimately, I’m there to conduct business, and whoever is in my way and wherever it may be, it makes no difference.”

NO LIMITS
“You get to these events, and then you go ‘what’s next?’ You go forward and go bigger. There are no limits. The bigger the better. That alone inspires me to work harder than everybody and overcome every obstacle and adapt to every situation and evolve.”

MR. MODEST
“I’m just warming up. You’re gonna have to get used to my handsome Irish face.”