Quitting Not In Maki Pitolo's Vocabulary

It was the kind of setback that might have broken lesser men.

Maki Pitolo is not a lesser man.

“Quitting is not in our vocabulary at all,” said Pitolo when the topic of Hawaiian fighters is brought up. “We’re raised with heart, determination and a hard working mindset. Everything I’ve done, my dad has never let us quit anything. You do it to your best, or don’t do it at all. It was hard growing up as a kid, but we made it.”

Makaha’s Pitolo is human, though, so he was crushed when a shoulder injury scrapped his fight against Chibwikem Onyenegecha-Palmer on last summer’s Contender Series. This was an opportunity to put all the ups and downs of the past behind him and begin a new chapter as a member of the UFC roster.

It was not to be. But Pitolo wasn’t about to turn his back on his dream.

“I was super bummed, but it’s not about sitting there and just looking around, expecting somebody to help you up,” he said. “You gotta get yourself up, dust off the dirt and get back after it.” 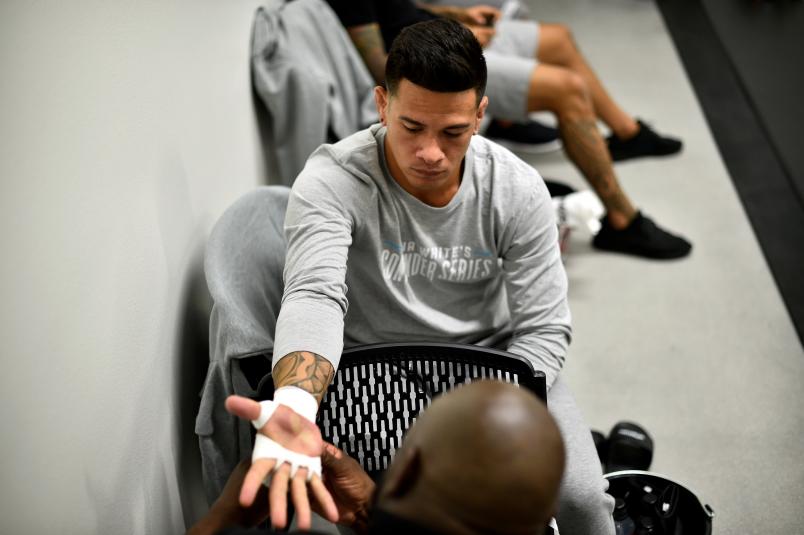 Maki Pitolo has his hands wrapped prior to his middleweight bout against Justin Sumter during Dana White's Contender Series at the UFC Apex on July 9, 2019 in Las Vegas, Nevada. (Photo by Chris Unger/DWCS LLC)

Once his shoulder was healed, Pitolo was after his manager Brian Butler to get him a fight. Butler delivered with a December matchup in Bellator against Chris Cisneros. Yes, the same Chris Cisneros who handed Pitolo his first pro defeat back in 2013. Five years later, Pitolo returned the favor, submitting his foe in the third round.

Last month, Pitolo got another shot in the Contender Series. This time, he made it to fight night and delivered on his promise, stopping Justin Sumter in 97 seconds to earn a UFC contract. If “Coconut Bombz” wasn’t a believer in things happening for a reason before, he is now.

“Before that, I never really believed that everything happens for a reason, but when I hurt my shoulder and lost the opportunity to fight on the card last year, I had to sit back and really think that maybe it just wasn’t time for me to be up there yet,” he said. “Maybe it was all in God’s hands and all in his timing.”

The 28-year-old has come a long way from the days when he started his pro career with a 1-2 mark and wondered if fighting was ever going to deliver what he expected it to. But there’s something to be said for the power of perseverance, and Pitolo was going to carry on, just like his dad taught him to.

I was questioning what I was doing and how I was approaching each fight,” he said of his early days in the fight game. “And having those two losses that early in my career, I think it just helped me be the MMA fighter I am today. My amateur career, I had two early losses, kind of the same way my pro career turned out. I had a win, then I had two losses and seeing that and the way I bounced back from those two losses, I knew I was in this position before, I know how to get up, I know how to attack the game again. It’s just back to the drawing board and come back with the better game plan. Earlier, I just wanted to get in and get out as fast as I can and try to knock the guy out and just get out unscathed, but it really takes time. You’ve got 15 minutes in there and if you really need all 15 minutes, don’t rush anything. Just have the time of your life in there. That’s what I go in there to do.”

Well, he looked like he was having the time of his life in Las Vegas against Sumter.

He earned that ride on the cloud, yet after a night out with his family, it was back to work. That’s what fighters do, and Maki Pitolo is a fighter, albeit a different one than he was when he first started this journey.

One that led him to the UFC. Dream part one – accomplished. Now it’s on to the next one.

“It was always my dream to be in here (in the UFC), and now that we’re here, my goals get bigger and my dreams get bigger, and if it’s not scary, why chase it?”