"No matter what the outcome is on January 26th, I’m gonna be happy with everything because I’ve trained very hard and I’ve trained to destroy Glover." - Quinton Jackson 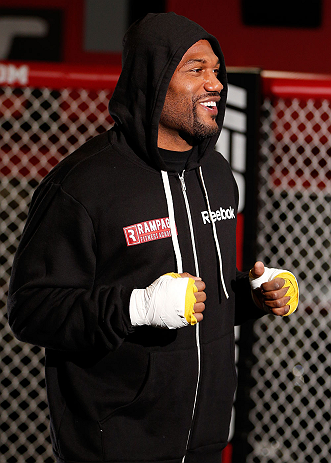 If anything, the nearly six year run of Quinton “Rampage” Jackson in the UFC has been interesting. Whether in the Octagon or outside it, and for good or bad, the Memphis native has always been right in the thick of the news cycle, a way of life he was seemingly born for.

So garnering plenty of headlines in the time leading up to his UFC swan song and network television debut on FOX in Chicago this weekend is almost business as usual for Jackson, even if they’re not focusing solely on his fight with Glover Teixeira. Yet despite this being the last fight on his UFC contract and his ill feelings toward the organization, he wants to keep things positive for the time being.

“I just want to be a positive person, and I have to get rid of all the negativity out of my life,” said Jackson, whose tumultuous relationship with the UFC has been well-documented, with the former PRIDE star lashing out at a perceived disrespect from the promotion, an odd notion for someone who has headlined eight events over the years. But no matter which letters are on the fight poster, on Saturday night, there’s a fight taking place, and Jackson knows that he’s in for one with Brazil’s Teixeira, even if he thinks it’s not a fight he would prefer.

“He’s a guy who says he’s gonna knock me out, says he’s gonna stand with me, but he’s training on taking me down and fighting me on the ground,” said Jackson on a recent media teleconference. “He’s just like the other guys I’ve fought. It sounds like they’re too cowardly to say exactly what they want to do and trying to get me to focus somewhere else, but I’m smarter than that now. I’ve pretty much found out from his pictures and stuff on the internet that he’s basically trying to wrestle me and take me down to the ground. So I kinda lost some respect for him. I used to respect him a lot as a fighter, but now I see his game plan, and it’s one of those things where you get disappointed in your opponent. But I’m looking forward to a good, exciting fight and I’m ready to go anywhere.”

It’s been a consistent complaint from Jackson, who has made no bones about his dislike for fighters who won’t stand and trade with him in the Octagon. Then again, it is a mixed martial arts bout, so if the bout does stray to the mat, it’s well within the rules to do that, and most fighters know that a key to beating Jackson is taking him out of his comfort zone. It worked for Rashad Evans in 2010 and worked for Ryan Bader last February. And if Teixeira – a jiu-jitsu black belt – sees the opening for a takedown and ground attack, you know he’s likely going to take it.  Why? Because it’s probably the best course of action. But Jackson isn’t buying it.

“I used to respect Glover because I seen him fight and he throws them things and he’s aggressive and he comes at you,” he said. “Then I saw his videos he’s putting out and he’s trying to hold me against the cage and wrassle me and take me down. I was really respecting him because I thought he was like a true fighter.”

If it sounds like sour grapes, only the 34-year-old Jackson knows for sure, and he hasn’t been doing much talking in the lead up to Saturday’s bout, opting to get out of southern California to train in the north of England with his longtime mates on the Wolfslair team.

“There are a lot of tough guys here and a lot of good sparring partners, and it was Christmas time and I didn’t want my teammates and my coaches to have to leave their families for Christmas this year,” said Jackson. “It was easier for me to come here than all of them to come to America.”

From all reports, the trip out of the country did Jackson good, and he agrees that he’s had one of his best training camps in England. If true, and if the old “Rampage” shows up in the Windy City this weekend, you have to wonder whether Jackson will consider re-signing with the UFC, or whether he’s content to walk off and test the market. He says that though his “heart is with MMA” he may just try a new form of fighting.

“I put my time in, I did my thing,” he said. “I just feel like I want to entertain people. My next challenge is that if I go somewhere, I want to be very exciting. Maybe I want to try some boxing or kickboxing.”

Or maybe, just maybe, in a sport where you can never say never, the former UFC light heavyweight champion will return to the place where he scored memorable wins over Chuck Liddell, Dan Henderson, Wanderlei Silva, and Lyoto Machida. That’s probably a conversation for another day though.

“No matter what the outcome is on January 26th, I’m gonna be happy with everything because I’ve trained very hard and I’ve trained to destroy Glover,” said Jackson. “I’ve trained in every aspect: on the ground, wrestling, standup, everything. I trained to be strong and then leave the UFC on a positive note and go on with my life.”