“I think it’s very important for me to get that belt back so I can show the world that they made a mistake.” - Quinton "Rampage" Jackson 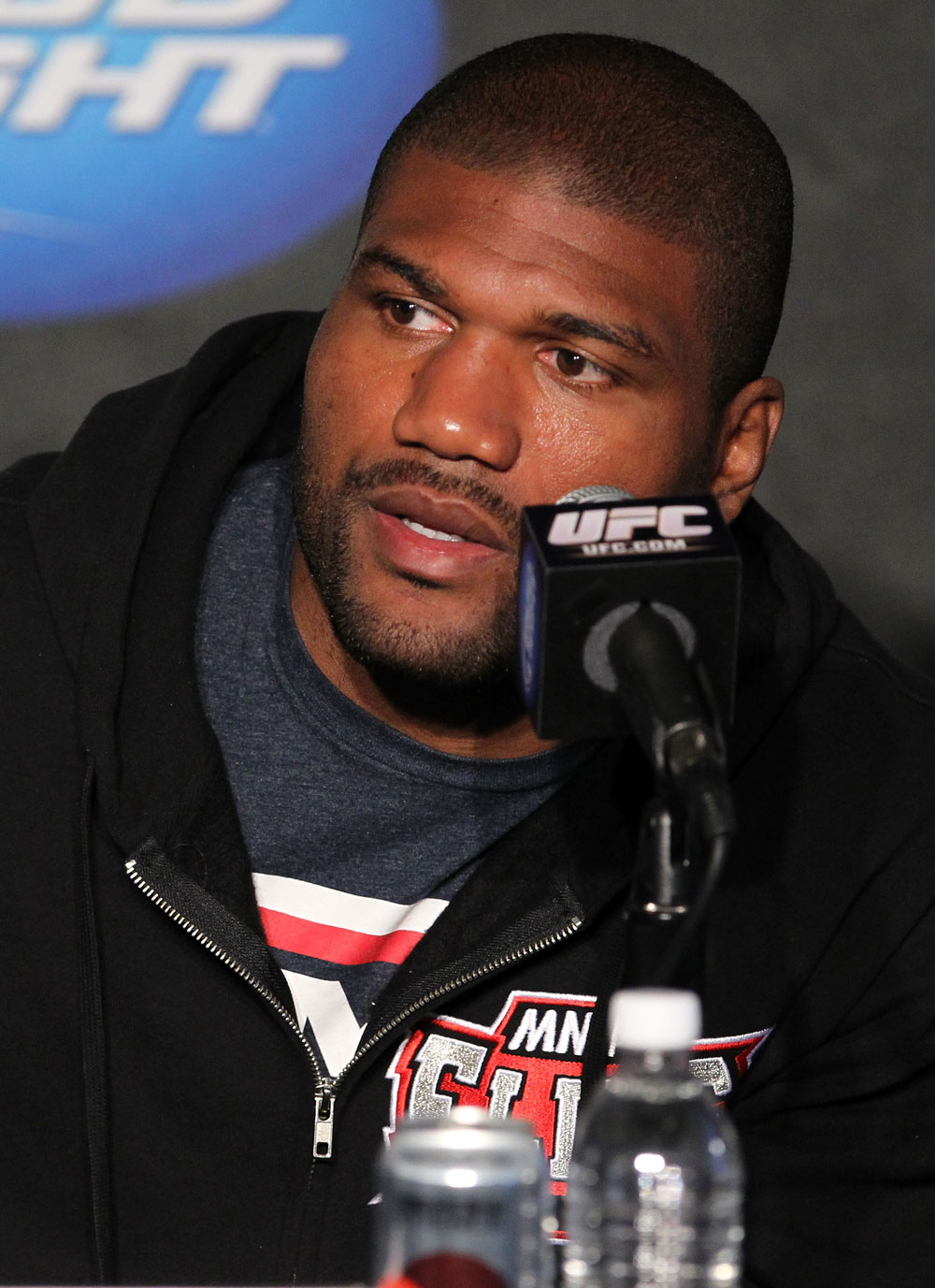 Three days before his 23rd birthday, Quinton Jackson scored a submission victory over Kenneth Williams in a Gladiator Challenge show in California that lifted his record as a professional mixed martial artist to 10-1.

A month later, on July 29, 2001, he made his PRIDE debut in Japan against Kazushi Sakuraba before over 27,000 fans. Life would never be the same for the native of Memphis, Tennessee.

A little more than ten years later, Jackson is facing a young man in Jon Jones who knows what it’s like to get his life turned upside down at the age of 23. The New Yorker known as “Bones” became the youngest champion in UFC history earlier this year when he stopped Mauricio “Shogun” Rua to take the light heavyweight title. Now 24, Jones will defend his crown against someone in “Rampage” who has a pretty good idea of what it’s like to be in his shoes.

“I was hungry,” recalled Jackson of his first days in Japan, where he went from obscurity to stardom in the matter of that one fight (a loss) with the legendary Sakuraba. “I was just coming into PRIDE and I knew I was being fed to the wolves, but I made due with my situation. I was happy with what was going on, and I was still humble. I didn’t let the stardom that PRIDE brought go to my head because as soon as you fought in PRIDE, the welcome that the Japanese fans gave you couldn’t be compared to what you got in America. It was really big, it was in the newspapers and all over the news the next day and it was mainstream a long time ago. I was just happy to be there and finally making money at the sport I loved. Back then I didn’t hate training as much because I didn’t have so many bumps and bruises. (Laughs) Back then it was all love.”

He pauses, almost as if transporting himself back to the Land of the Rising Sun, where he made his name as one of the best light heavyweights in the world.

“I miss those Japanese fans,” Jackson continues. “I can honestly say that the Japanese fans were the best fans I ever fought in front of. I like the England crowd as well, but the Japanese fans respect you so much that they’re quiet, so you could hear your cornermen. You don’t get that nowhere else in the world.”

Back then, Jackson was as happy go lucky a fighter as you would find. Hilarious in interviews, always joking, it wasn’t until the lights went down and he stepped into the ring that “Rampage” came out. He went 12-5 in PRIDE over his five years there, with Igor Vovchanchyn, Murilo Bustamante, Chuck Liddell, Ricardo Arona, and Murilo ‘Ninja’ Rua among his victims.

After a WFA win over Matt Lindland in 2006, the next stop was the UFC, and while it wasn’t his first stop in his home country as a professional, he did notice that there was a new acceptance of the sport in the United States, and with such widespread acclaim came casual fans who didn’t exactly know who the wisecracking guy with the chain around his neck was. But regardless of the reintroduction process, he never lost the fans who had been following him through the wonders of Pay-Per-View and the internet.

“Those are the hardcore MMA fans that were fans before it got mainstream,” said Jackson. “Those are the fans that know a lot about the sport and they’ve seen our past fights. They’ve been with us for a long time, they know MMA a little bit more and they know that everybody can’t win all the time. The new fans, they’re kinda like fair-weather fans. They’ll be cheering for you in the beginning until you start getting your ass whupped. Then they don’t cheer for you. They’ll start booing you and stuff like that and they don’t have respect for the fighters.”

It resembles the backlash a lot of fighters, including Jackson, and now including Jones, go through. And though Jackson may not like being flavor of the week one day and out of favor the next, he’s not about to change who he is.

“Nothing’s gonna change my personality – no titles no money, nothing like that,” he said. “I always stayed grounded and stayed humble because I look at this job as a career, just like a doctor or a lawyer or schoolteacher. I don’t think I’m better than anybody else because I’m a professional fighter. A lot of fighters and people, when they have high-profile jobs, they think they’re better than other people, and it can go to your head if you’re not a grounded person. That’s why people don’t understand when I say this is my career and my job. It’s not that I don’t love the sport, it’s that it being a job keeps me grounded. I have a strong father who talks to me all the time, and one of the things he instilled in me as a kid is that ‘don’t let money make you; you make money.’ So people can make fun of me and say I’m just doing this as a job, but that’s just the American Dream. That’s what we were taught our whole lives – go to school, get an education, so you can get a good career so you can make money. That’s me, I’m living the American Dream.”

Frankly speaking, he is. A successful fighter who also had a big role in the hit A-Team movie a couple years back, Jackson is doing all right for himself after surviving various ups and downs both in and out of the Octagon. Yet those trials and tribulations make him appreciate what he has now.

“I thank God all the time and I’m very blessed,” he said. “I keep it real - I’m not an educated person. I went to college, but I’m not one of those people who thinks they’re smarter than everybody else. I’m intelligent, but I’m not educated, so there’s no way I could be making this type of money in another career. I wasn’t gonna be a doctor or a lawyer, so I’m happy that I can help my parents out and put my little sister through college and buy Lamborghinis and go on vacation and have a nice house to live in and leave stuff for my kids. I’m happy and I’m blessed.”

In fact, the only time you’ll see him stray from that frame of mind is a) in the middle of an arduous training camp, or b) when discussing his first loss in the UFC, a controversial five round decision defeat at the hands of Forrest Griffin in July of 2008 that cost him his UFC light heavyweight title. He’s lost before and he’s lost since, but this is the one he can’t let go of.

“I just don’t feel like I lost that fight,” said Jackson. “When I fought Ninja (Rua), I thought I lost that fight until I went back and watched it. And when I fought (Lyoto) Machida, he rocked me in the last round, and when I got rocked, I didn’t remember all the good stuff I did until I watched the fight. So when I think I lost a fight, I’m the first one to say it. And I just feel like I didn’t lose that fight with Forrest. I was the champion, and you’ve got to beat the champion to be the champ. He injured me in the fight, he did a great job and had a great gameplan, but I felt like I did just enough to win that fight. I dropped him a couple times and I feel like I won 3-2, but they took my belt away. With Shogun (Rua) and Machida, everyone thought Shogun beat Machida the first time they fought, but Machida kept his belt and they clearly said ‘you’ve got to beat the champ to be the champ.’ So everybody was confused. I felt my fight was more decisive than Machida’s in being clear that I won. It is what it is, but it does bother me.”

Since that loss, Jackson has gone 4-1, with the only defeat coming via decision to Rashad Evans in 2010. Sandwiching that defeat are wins over Wanderlei Silva, Keith Jardine, Machida, and Matt Hamill, earning him a shot at Jones’ belt this Saturday night in Denver. It’s the fight he’s been waiting for in more ways than one, but most importantly to show that he belongs at the top of the 205-pound heap.

“I think it’s very important for me to get that belt back so I can show the world that they made a mistake,” said Jackson. “I want to show that I’m still here, and I still train like a champion and I haven’t stopped training like that since that fight.”

As for Jones, Jackson admits that the phenom “is a very exciting fighter,” but when asked what he sees when he looks at the champion, he simply says “fresh meat.”