“This whole thing is a little more laid back than the fight game, we get to go in there and just have some fun and compete and grapple."
By Walker Van Wey, UFC FIGHT PASS • Nov. 19, 2019

“Retirement” seems to simply be a synonym for “vacation” in MMA. The dramatic retirements are met with “returns” shortly after.

Just this year alone we’ve seen the return of Nate Diaz, Cain Velasquez, the retirement and return of Stefan Struve, Ben Askren and the face of Team Alpha Male, Urijah Faber. One name that has stayed true to his retirement, however, has been Faber’s teammate and longtime staple of the featherweight division. Chad “Money” Mendes.

After his UFC 232 loss to Alexander Volkanovski, Mendes lived the American dream by retiring at 33 and while there’s still plenty of prime years left, Mendes has remained out of the Octagon and the “Rumors” column.

“I started a business back in 2015 with a buddy of mine called Fins and Feathers it’s a celebrity outdoors service where we take different clients all of the world on different hunting and fishing trips with different celebrities,” Mendes said. “We’ve been doing that full bore since. To me, it’s been fun as hell.” 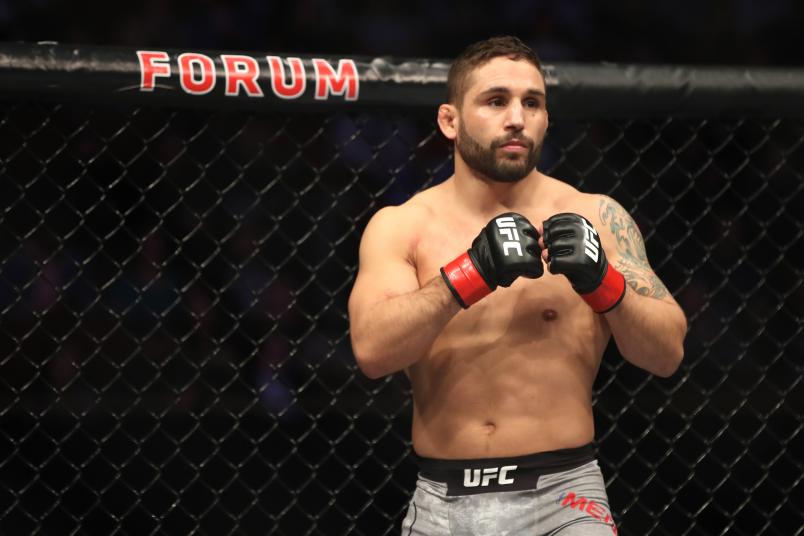 These days, Mendes has let the fight game fade from the back burner to out of the picture altogether. Instead of pushing his body to the limit against another opponent man who sees him as a roadblock obstructing their path to the top, Mendes has begun competing with himself and the gym.

“For about four months I cut way back on any cardio,” Mendes said. “I would do 20-minute warmup stuff on a cardio machine and then would just lift as heavy as I could go. Mainly because I just wanted to see how big I actually can get. I actually hit higher than I’ve ever hit before. I weighed about 175 pounds.”

“Money” Mendes missed the days of being able to walk up the stairs without so much he cut back ten pounds and kicked the cardio up. No matter what he’s been experimenting with in the gym, MMA training has all but disappeared. Approached about fights? Maybe. But nothing was tempting enough for Mendes to entertain the idea of. 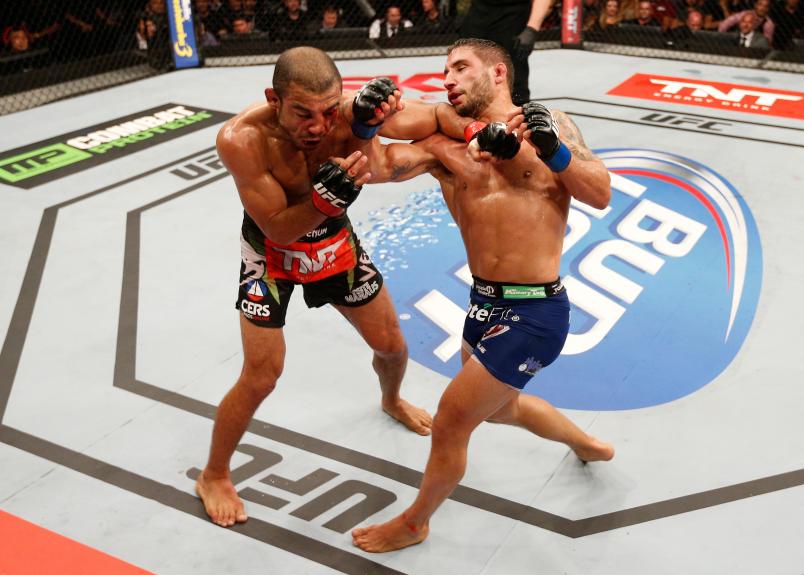 Mendes was pulled away from what he referred to as “meathead lifting” to make time for grappling with no hesitation when he heard the idea of QUINTET Ultra.

“I haven’t been doing a whole lot of MMA training,” Mendes said. “I’ve been doing a lot of biking and long distance runs and different types of weight training regimens. I just jumped back into grappling when I got the call about this. I got in there, got to grapple with Faber the other day for the first time probably since my last fight. It felt great to pick it back up, get in there and roll with a legend like Faber.”

After seeing the lineups and an opportunity to defend the honor of the WEC, Mendes jumped back into the gym and prepared to be on the wrong end of many size differentials.

With the added muscle mass, Chad “Meathead” Mendes has the physical power to force his way in and out of many positions that his high level wrestling may have been lacking before and it’s led to an even more battle ready WEC veteran.

“It’s always much harder when you get in there against a guy who’s bigger than you,” Mendes said. “Honestly though, I feel fine. Grappling and wrestling is two different things in my world. I know a few of these guys have wrestling backgrounds and that’s my world.” 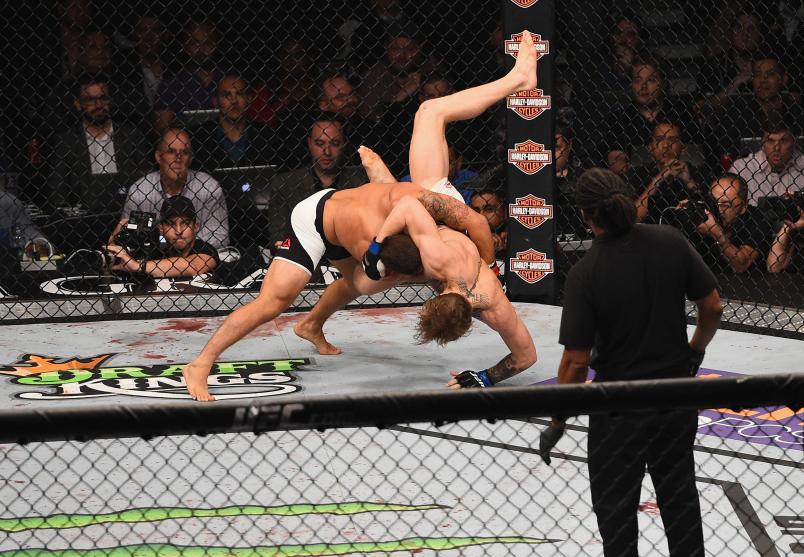 Another component to Mendes’ world is the vicious guillotine that Team Alpha Male has perfected like few other camps. Will the rest of the teams see it coming? Will it still work? Will he be changing his style up to accommodate the anticipated choke?

Mendes made it very clear, with opponents like Rumble Johnson, it won’t matter.

“In all honesty there’s no freakin’ way,” Mendes said with a laugh. “There’s no way I’m getting my forearms around that dude’s thick neck. I could sit here and try to talk this up as much as I want but let’s be honest, that ain’t happening.”

With assurance that there’s more in the arsenal than wrestling and a guillotine choke, Mendes isn’t plotting how to burn through the competition but looking to absorb every second of matchups he could have only dreamed about growing up and early in his career. 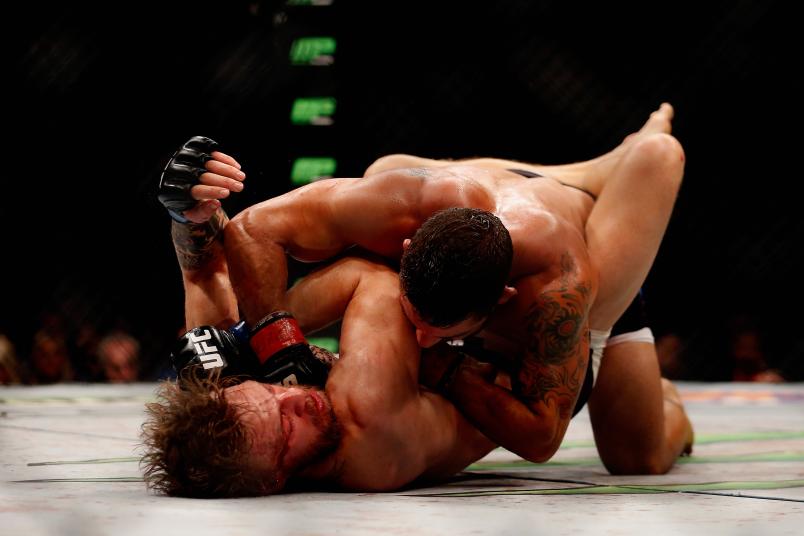 Once knockouts are taken out of the picture, competition doesn’t have to feel so intense.

“All in all, everybody’s probably thinking the same thing I am, I’d imagine,” Mendes said. “This whole thing is a little more laid back than the fight game, we get to go in there and just have some fun and compete and grapple and If I can get in there and grapple with a dude like Sakuraba I think that’s going to be my highlight.”

It's a new height for Mendes that came after his MMA career and he’s made it very clear that it’s going to be hard to top.

QUINTET Ultra may be the new standard to beat to bring Chad Mendes back into competition but it’s not going to be an easy mark to reach.

“I’m sure everybody’s probably pretty pumped,” Mendes said. “Leading into this with the anticipation I have, this is definitely up there. This is probably right below fighting for the UFC world title in my mind with the names attached to this thing.”

Find out why Chad “Money” Mendes compares QUINTET Ultra to his Fight of the Year performance against Jose Aldo at UFC 179, His first crack at UFC gold at UFC 142 and his UFC 189 bout against Conor McGregor by tuning in on December 12 at 7 p.m. ONLY on UFC FIGHT PASS!