The Former Middleweight Champ Is Ready To Reclaim His Belt At UFC 271
By James Cooney • Feb. 8, 2022

Most people know what it feels like to suffer a career setback, but very few on the same level as Robert Whittaker. In October 2019 at UFC 243, in front of a record home crowd, “The Reaper” was knocked out by an opponent who he couldn’t stand. And that opponent – Israel Adesanya – not only walked away with his 185-pound title, but very nearly his love for MMA.

“I took a step away from the game, without really any intention of coming back,” admits Whittaker about what followed directly after the loss. “The time away was soul searching; trying to find out if I still wanted to fight.”

The 31-year-old Aussie doesn’t blame anyone but himself for the defeat, though, noting, “Everything got to me in that fight – the pressure, the hype, the build-up, the fans… He wanted to get inside my head and he did it really well. I was thinking about the wrong things and it took so much energy out of me.”

Fortunately for UFC fans, Whittaker chose to return to the sport, and has since put together three of the best performances of his career in beating Darren Till, Jared Cannonier and Kelvin Gastelum, thereby earning a rematch with the division-dominating Adesanya at UFC 271.

“I learnt a lot from that fight with Izzy,” he reflects.“I feel like I needed the loss, because I came back as a different person – much better and much happier. I’m confident that I’m going into the rematch as the best version of me. And I’m going in with my head where it needs to be.”

So, did learning from his mistakes against “The Last Stylebender” involve rewatching their UFC 243 bout on repeat?

“No!” laughs Whittaker. “I find it hard to rewatch a fight where I get knocked out. I don’t watch sparring or interviews, either. I hate hearing my own voice.”

The former champ says his overwhelming memory of the night in question is of “wanting to rip his head off”, which he now realises was the wrong mindset.

“I know some guys can think like that; they even need that. But it just clouded my vision, especially against a crafty counterstriker. I was just a charging bull.”

Whittaker explains that in his past three UFC outings, he has been working on his composure, as well as his distancing and defense. In his goal to be the best fighter he can be, he believes he’s ticked a number of boxes.

One person who has been helping Whittaker of late is the godfather of Australian boxing, Johnny Lewis. The 77-year-old has trained six world champions, including Kostya Tszyu, Jeff Fenech and Jeff Harding, and has been working with Rob to polish his pugilistic abilities.

“Johnny’s a big presence in the gym,” reports Whittaker. “You want to work for him. He’s got that veteran mind and you believe what he says.

“The things we’ve been working on are making the punches faster, the defense crisper and just improving everything by small percentages. Across the board with my boxing, I feel it is better. I hope to display that on fight night.”

The introduction of boxing guru Lewis is only one of several changes that “The Reaper” has made for this training camp, which he feels is superior to his previous preparation for facing Adesanya.

In the time since Rob and Izzy’s first title fight, things have changed for the Kiwi champion, too. For one thing, he was handed his lone professional loss after moving up to light heavyweight at UFC 259 to face Jan Blachowicz, who implemented solid defense and calculated takedowns to neutralize Adesanya’s striking. Some see this as a blueprint that could be utilized by future opponents.

“Yep, it is the blueprint,” agrees Whittaker. “But it’s also easier said than done. You can say, ‘You’ve just got to take him down to win.’ But then you actually have to get him down, and he has those long limbs!”

Given that we’re now expecting a new Robert Whittaker at UFC 271, does he think we should we expect a new Israel Adesanya as well? 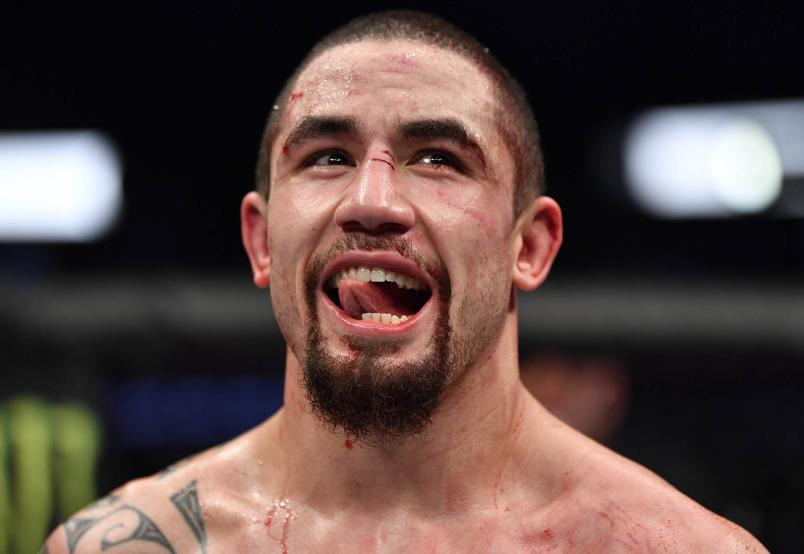 Robert Whittaker reacts after the conclusion of his middleweight fight against Darren Till on UFC Fight Island on July 26, 2020 in Yas Island, Abu Dhabi, United Arab Emirates. (Photo by Jeff Bottari/Zuffa LLC)

Robert Whittaker reacts after the conclusion of his middleweight fight against Darren Till on UFC Fight Island on July 26, 2020 in Yas Island, Abu Dhabi, United Arab Emirates. (Photo by Jeff Bottari/Zuffa LLC)

“He’s smart enough, with a good enough coaching staff behind him, to know I’m not going to be coming into this fight the same. They’ll be trying to anticipate my changes. So, yeah, I’m certainly banking on him changing his game and bringing something new and high-level. It’s going to be an exciting fight.”

Indeed, the rededicated Whittaker appears much more enthusiastic about the challenge in front of him at UFC 271 than settling any personal scores. He is quietly confident, focusing on the logical side rather than the emotional.

“I don’t have any animosity towards him anymore. I’m just enjoying fighting and really looking forward to [the rematch].

“It’s going to be a hard fight. He’s the champ for a reason, but I think I have the skill-set to beat him. I think I can close the gap and maybe take it to the ground. Or I can fight on the outside and not get baited into those traps.

“Hopefully, we will see a very different outcome. All I know is that I’m stacking every chip in my favour.”