The Quest Continues for Tyron Woodley 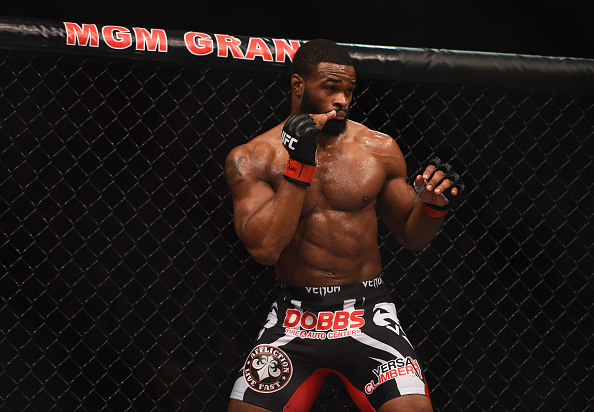 Tyron Woodley has always been honest about his progress and potential as a fighter.

During his Strikeforce days, the Ferguson, Missouri native was clear that he was a work in progress – a fighter on the way up that was steadily putting it all together with designs on lording over the division once everything clicked into place. He never got the chance to face Nick Diaz like he wanted, and when he did square off with Nate Marquardt for the vacant belt, he caught the first professional loss of his career in a wildly entertaining fight that ultimately improved his stock overall.

It continued to rise when he landed in the Octagon seven months later and starched Jay Hieron in 36 seconds. A guy with a collegiate wrestling pedigree from a Division I powerhouse with blistering power? Woodley quickly became someone fans looked to as a future contender in the 170-pound ranks, but since then, “The Chosen One” has struggled to find consistency from fight to fight, and he’ll be the first to admit it.

“I always say this is ‘The New Tyron’ and then I’ll go out there and I’ll do a fight where it will look like I’m dangling around,” Woodley, who squares off with former Big 12 rival Johny Hendricks in a pivotal welterweight pairing Saturday evening at UFC 192 in Houston, laughed. “I’m very honest about my progression, and honest about who I am as a fighter. Everybody knows what I’m capable of – that’s one good thing – and sometimes it’s best when you know what you’re capable of and just keep working to put it all together.”

Over his first seven appearances in the Octagon, Woodley has compiled a 5-2 record, but for every impressive performance, there has been a less than stellar showing that follows and brings his momentum to a screeching halt.

Dominant victories over Josh Koscheck and Carlos Condit were followed by a one-sided loss to Rory MacDonald where the 33-year-old contender seemed incapable of pulling the trigger. Even though his last two appearances both resulted in wins, they too illustrate the peaks and valleys in Woodley’s performances, as he travelled to Macau to drop Dong Hyun Kim in 61 seconds, only to struggle to a split decision victory over Kelvin Gastelum five months later, despite the fact that the former TUF winner missed weight by a wide margin and had a miserable fight week experience as a whole.

One of the things Woodley has addressed in his ongoing quest for consistency is finding coaches that can be in his corner and work with him on a regular basis.

“I think it comes with repetition, consistency and a coach constantly monitoring me,” said Woodley, who has been lobbying for the opportunity to face the former welterweight champion Hendricks for quite some time and finally gets his wish this weekend.

“I think fighters are consistently growing and I think most coaches already assume that I have it under control; they don’t think I want someone to step in and take over, when actually, that’s what I desire. I’m the only welterweight in the world that’s within the Top 20 that doesn’t have a coach every day. I just train hard every day. I’m so used to doing it by myself, but I’m just waiting on that person to step up.”

To that end, Woodley has made some changes and ventured away from American Top Team in order to find what he’s been looking for.

With long-time training partner and trusted veteran voice Din Thomas already in his corner, Woodley has started working with Duke Roufus in advance of his co-main event clash with Hendricks and while they haven’t been working together for long, the early returns have the welterweight hopeful excited and he has his son to thank for the connection.

“I was sitting at my house, me and Din – we started camp in St. Louis – and we were like, ‘Okay – what are we going to do? We’ve got to go somewhere today. We’re either going to go to Florida or we’re going to go to Milwaukee,’” began Woodley, explaining his path to putting in work at the Roufusport facility. “And my little 7-year-old son comes up like, ‘You should go up there and train with Ben (Askren) and Anthony (Pettis) and those guys.’”

Woodley, who was teammates with Askren at the University of Missouri, had been talking to Roufus’ two most decorated disciples about getting in work in Wisconsin for some time, but his son cast his vote in favor of heading north, not south, Woodley and Thomas shipped off without hesitation.

“So we jumped in the truck, packed up and said, ‘What’s the worst-case scenario? We go up there, we don’t like the training and we’re only six hours away, so we come back home.’ It was a leap of faith and I think every great thing comes with a big leap of faith and it was no different in that situation.

“I feel like I’ve known Duke forever and I have known Din forever and those guys have found a special spot in my heart,” Woodley continued, singing the praises of the duo you’ll see in his corner in Houston. “They’re not over the top – they should be because they’ve got all the experience, all the results with the fighters that they train, but they’re the guys that are the most modest, most willing to learn and they know my buttons.”

But make no mistake about it – Woodley still flies the American Top Team flag and has the full support of the only team he’s represented in the cage over the course of his career.

“I’ve never fought for another team,” stated Woodley, who started with the South Florida fight team as a “bag of bones” for the likes of Thomas, Yves Edwards and Thiago Alves as he puts it. “From the time I was an amateur until now, I’ve only fought for American Top Team.

“They know that ‘Hey, if Tyron feels comfortable with this guy and he’s going to get him to the next level, he’s always going to represent us well, so we’re not going to sweat it. We know where his heart’s at and we know where his loyalties lie.’”