In recent months the heavyweight division has experienced quite the shake-up and for Francis Ngannou, change might be exactly what he needed. Since his losing to Derrick Lewis at UFC 226, Ngannou has moved his camp from Vegas back to France in an effort to recapture the magic that once propelled him for a shot at the title.

That title shot run included a decisive victory over the surging Curtis Blaydes. But after Ngannou’s disappointing loss to Lewis, the two top four contenders have decided to run it back at UFC Beijing this Saturday.

We spent some time with Ngannou to discuss how he is feeling, what he remembers about fighting Blaydes and how he thinks the rematch will play out.

UFC: How have you been since UFC 226? What’s it been like to be back in France?

Ngannou: You know my camp was very good. That’s why I moved from Las Vegas to Paris, to be in a good environment and trying to figure out what went wrong. Being around my friends and close to my family. It’s helped.

UFC: You’ve fought Curtis before. What are you going to take from that first match-up into the second one?

Ngannou:  The thing that I’m going to take away from the first fight is that Curtis is a very smart fighter. Because I still remember when people tell me that he is a wrestler then I step into the Octagon with him and the way he moved I just realized right away he’s very smart. Moving like a striker, how he fought was very smart. I know that he kept improving. I know he won’t be easy but I’m definitely not going to let him have a chance. 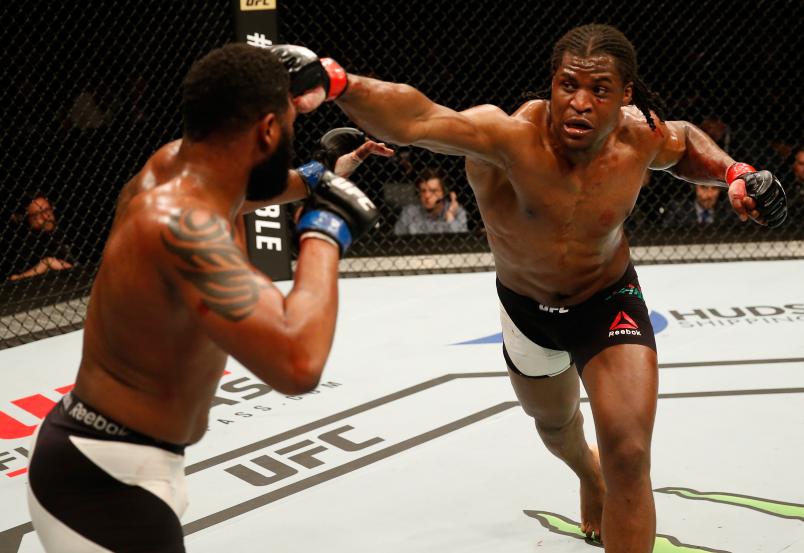 UFC: How have you improved as a fighter in the last year?

Ngannou: I improved a lot. This year, 2018, was just a learning process and I learned a lot. Even technically I improved and learned way more about MMA, technique and how to fight. As a fighter I grew.

Ngannou: My favorite part of fighting was the striking but in this game it’s not enough. It’s still striking but I’m getting myself comfortable on the ground game. That’s exactly why I’m planning to submit him in this fight because he’s a wrestler. I think I will have a hard time striking because he will always try to take me down and as soon as this happens, I will be able to take a shot.

UFC: You apologized to fans after your last fight. How are you going to bounce back from that?

Ngannou: Some people think and me too, I was disappointed because it wasn’t a good fight at all. I am ashamed of it but it wasn’t my last fight. I’m just at the beginning of my career. I have a lot of chances to prove they are wrong, those who think I’m not that good. That’s the story of my life. I’ve always been against the odds and always been against everybody who doesn’t believe in me. I’ve had to prove them they were wrong. I’m looking forward to doing this. It’s my only way to answer them and it’s the best way to answer them, by getting it done differently.

UFC: You’re a soft spoken, calm guy. How to do you flip a switch once that Octagon door closes?

Ngannou: It comes naturally, it’s just a mindset. You know that you’re going there to complete something some job. You work for it your entire life you seek this opportunity and then as soon as you get it you give your all. It’s just a job. Everyone who has a job, like you guys, you’re doing everything to get it done. That’s all, it’s nothing personal it’s a job.

UFC: If the UFC comes to Paris would you want to headline that event?

Ngannou: I’m getting myself ready for that because I know it’s going to happen. It’s not like if ever, the UFC is going to be in Paris there is no way for that to not happen. I just want ready to take the shot, the opportunity.

Tune in to see Francis “The Predator” Ngannou take on Curtis “Razor” Blaydes in the main event at UFC Beijing this Saturday live on UFC Fight Pass at 6:30/3:30 a.m. ETPT.