Pyle retires with a legacy to be proud of

Mike Pyle didn’t win them all during a nearly two-decade career in mixed martial arts that ended last Saturday with his retirement following a UFC 222 loss to Zak Ottow. But whenever his name was on a fight contract, opponents knew they were in for a fight and fans knew they were going to see one.

That’s a legacy the 42-year-old can be proud of, and whether it was willingness to take on all comers, his ability to finish fights or his legendary mullet (which unfortunately didn’t make an appearance at UFC 222), the Dresden, Tennessee native was a fan favorite and ever-present sight in the Octagon since he debuted in the UFC with a bout against Brock Larson in 2009.

Pyle would lose that night, but 10 times his hand would be raised in the promotion, with his biggest win likely coming at UFC 120 in October 2010, when he traveled to London and put an end to rising British star John Hathaway’s unbeaten run with a dominant three-round decision that was a perfect example of the adage that there are levels to this game.

Before the bout, Pyle, who was 35 at the time, was the grizzled veteran battling the 23-year-old young gun, and he was expected to go back home to Las Vegas with a loss. He had no problem with what people said before the bout, simply because they weren’t going to be in the Octagon with him and Hathaway on fight night.

“Whether I like it or not, which I do, there are gonna be younger, stronger, faster guys coming in with more talent. That’s all there is to it, and why not pit yourself against them and just keep going until you just can’t anymore? It’s all good fun and I’m a fighter – whether you’re younger or older, I’m gonna fight you anyway and put myself to the test.” 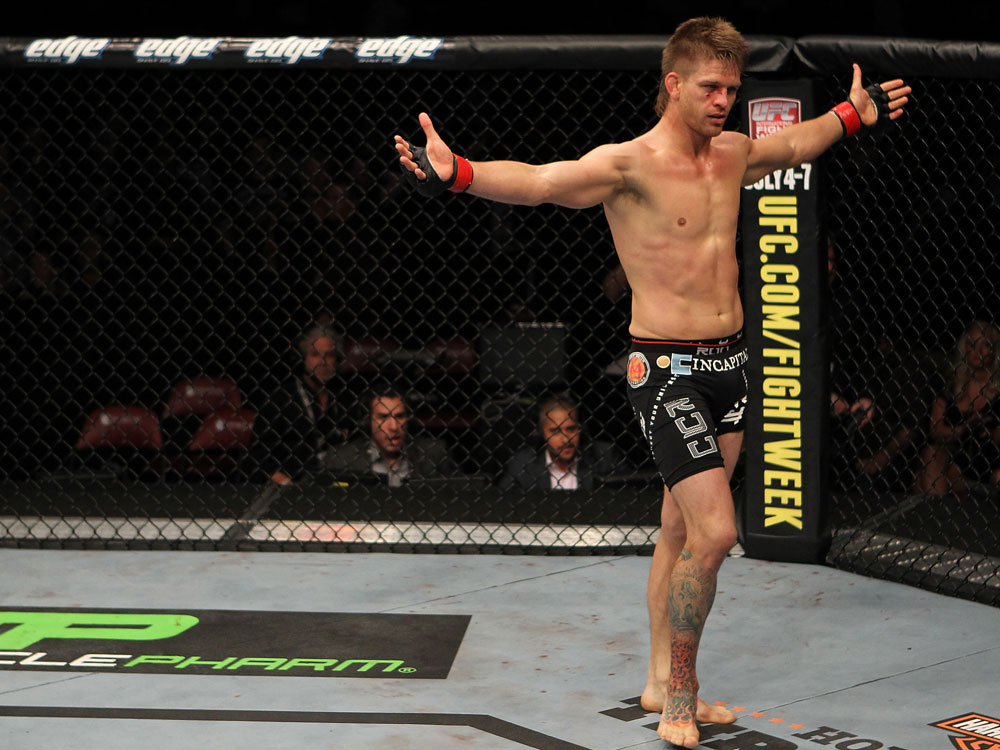 Pyle’s victory was the middle one in a three-fight winning streak, and while that streak was broken by Rory MacDonald in 2011, Pyle rebounded with four consecutive victories in 2012-13 that included three knockouts (one over fellow vet Josh Neer) and a decision over Rick Story. And while Pyle’s striking and power became more potent in the latter part of his career, his reputation and nickname was made by the black belt-level ground game that earned him submissions in 16 of his 27 career victories.

“That’s the way that I like to fight and why I got the nickname ‘Quicksand’ given to me,” he told me in 2010. “The harder you’re fighting in the quicksand, the worse it’s gonna get and you’re gonna keep sinking. I always try to set things up and I don’t try to bully my way into submissions because then they know it’s coming. And there’s no better way to get a nice, fast, and clean sub then to go with the flow and try to keep my technique sound where I know that if I pressure a guy into one certain way, he’s gonna go another way to get out, and that’s what I’m looking for. It’s like going fishing. I’m trying to outsmart him and hopefully I’ll hook him.”

Whether by triangle, guillotine, armbar, rear naked choke or kimura, Pyle could get you, and if you paid too much attention to keeping off the ground, he could knock you out. In fact, five of his last six wins came courtesy of his strikes. But more than his technique and knowledge of the sport, Pyle’s lasting impact comes from the reality that he was a true fighter, a fact revealed by a glance of his record, which shows him battling future UFC light heavyweight champion Quinton “Rampage” Jackson in his first pro fight in 1999.

“The guy I was supposed to fight – that was actually in my weight class - got hurt at a jiu-jitsu tournament,” recalled Pyle before the Hathaway fight. “So they called me and asked me if I was down to fight Rampage. I was like ‘yeah, let’s do it.’”

That was Mike Pyle, 100 percent fighter.

“In my head, I’m not thinking ‘how can I jump up and down and look all crazy to this guy and maybe intimidate him,’” he said. “If that’s on your mind, then you’re probably not straight on what you need to, which is staying focused. That guy is just as nervous as you are, and if they say they’re not, they’re lying. So you just try to keep that all in and save that energy for fighting. I don’t like jumping up and down and trying to give him dirty looks and all that. For me, it’s just a waste of time. Let the fighting do the talking.”