PVZ: From the Undercard to the Main Event 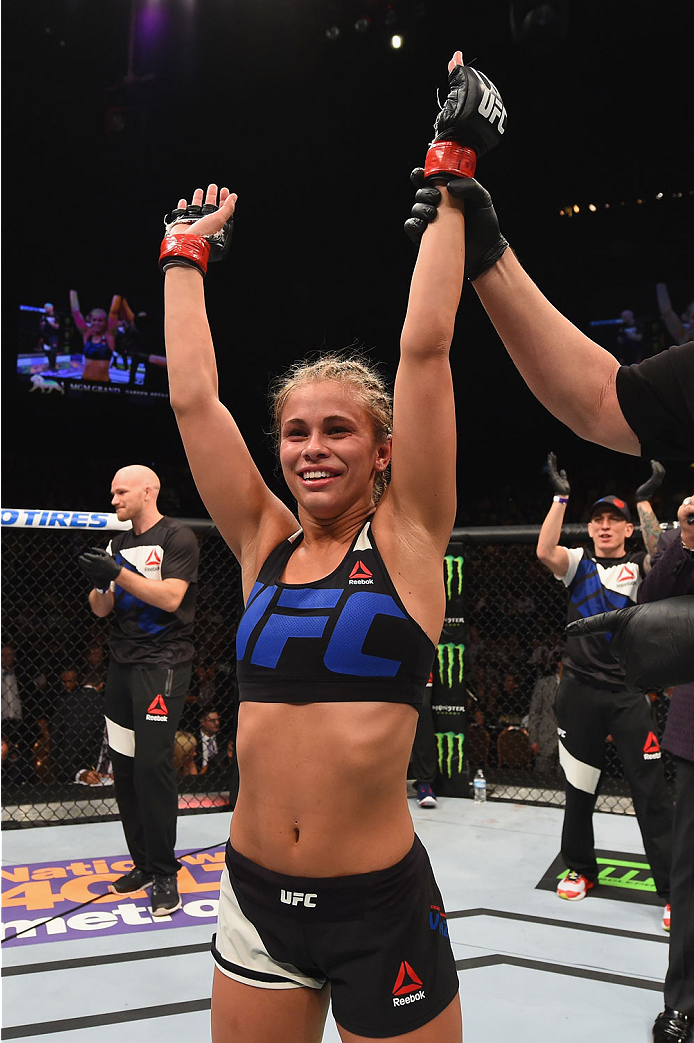 A year ago, there was a bit of a buzz about the arrival of Oregon native Paige VanZant to the UFC. Today, she’s in the first week of training camp to prepare for her first headlining gig against Joanne Calderwood at The Chelsea at The Cosmopolitan in Las Vegas on December 10.

In between, there have been media tours, photo shoots, national television exposure, a Reebok deal and, most importantly, three consecutive wins in a talent rich division. It’s been the Year of PVZ, but not necessarily what she expected from life as a UFC fighter.

“I don’t know if I would say it’s lived up to my expectations, because I never expected this,” she said. “I’ve just always wanted to win, I’ve always had the desire to be the best at anything I do, so I continue to push myself, and that’s why I believe I win fights. I have the desire to be the best and beat the best. It’s not what I expected because I could have never expected to be in this position, but I love every second of it and I can’t wait to see where else my career takes me.”

The world awaits as well. Blessed with looks and charisma that have mixed well with her tenacious fighting style and evolving fight game, VanZant is one of those rare fighters with the “it” factor that separate them from the rest of the crowd. In the 21-year-old’s case, fans in and out of the MMA bubble are intrigued by the idea of this “girl next door” going in and punching people in the face for a living, and she’s well aware that this is a key to her appeal.

“For me to be a fighter, it’s different, it’s unexpected,” she said. “You wouldn’t expect someone like me to be a fighter, and I think that’s what draws people to watch me. It’s the same thing if you saw (heavyweight contender) Roy Nelson in ballet tights all of a sudden performing in Julliard; people would want to watch. It’s something unexpected, it’s something you would have never imagined, and I think that’s why I’m getting so much attention.”

If you can shake the visual of the 260-pound “Big Country” performing in ballet tights, carry on so we can get back to the sixth-ranked VanZant, who will face her toughest test to date in Muay Thai ace Calderwood this December. It’s the type of fight that could shoot “12 Gauge” Paige into the 115-pound title picture, making it the most pivotal of her young career. But all the attention and hype has shot down the ambitions of more than one hot prospect over the years, so luckily, while life has changed significantly for VanZant, one thing has remained intact, and it’s the one thing that can keep everything else from getting in the way.

“A lot has changed, but I’ve been with Team Alpha Male for two years now and they’ve treated me the same ever since I walked through the door,” she said of her Sacramento training squad. “They’ve really been trying to help me get better as a fighter and help me along with my career, so not a lot has changed in that sense. They’re just pushing me to get ready for the main event spot.”

And when the Octagon door closes, what really sets VanZant apart is her ability to push harder than any opponent. She won’t dazzle with knockout power or slick submissions; but when it comes to sheer will, she’s tough to beat.

If she puts it all together, VanZant has the potential to be a special fighter in this sport. Then again, she may already be that, simply because her competitive nature is second to none. Just ask the VanZant family, who have been dealing with this side of their daughter and sibling for years.

“I knew from a very early age that I was going to be successful, and even growing up I always had this fighter’s side of me, and it got me in trouble a few times,” she said. “I was the most competitive person out there. We had to cancel family game night with my parents and my brother because of how I’d get if I didn’t win. (Laughs) So I’ve always had a desire to win since I was born, and I’m a very terrible person if I ever lose. You don’t want to be around me if I ever lose, no matter what it is. If it’s a board game or my one fight (that she lost to Tecia Torres in 2013), it really affects me.”

Is that a scary thing to have to harness?

“I don’t think it’s scary,” VanZant said. “I think it’s a great part of me and it definitely helps me be a better person and a better fighter. I think you need to have that in you.”

Almost makes you wonder what Miss VanZant will have in store for an encore in 2016.

“You’re just gonna have to wait and see,” she laughs. First Roy Nelson in tights, now this?