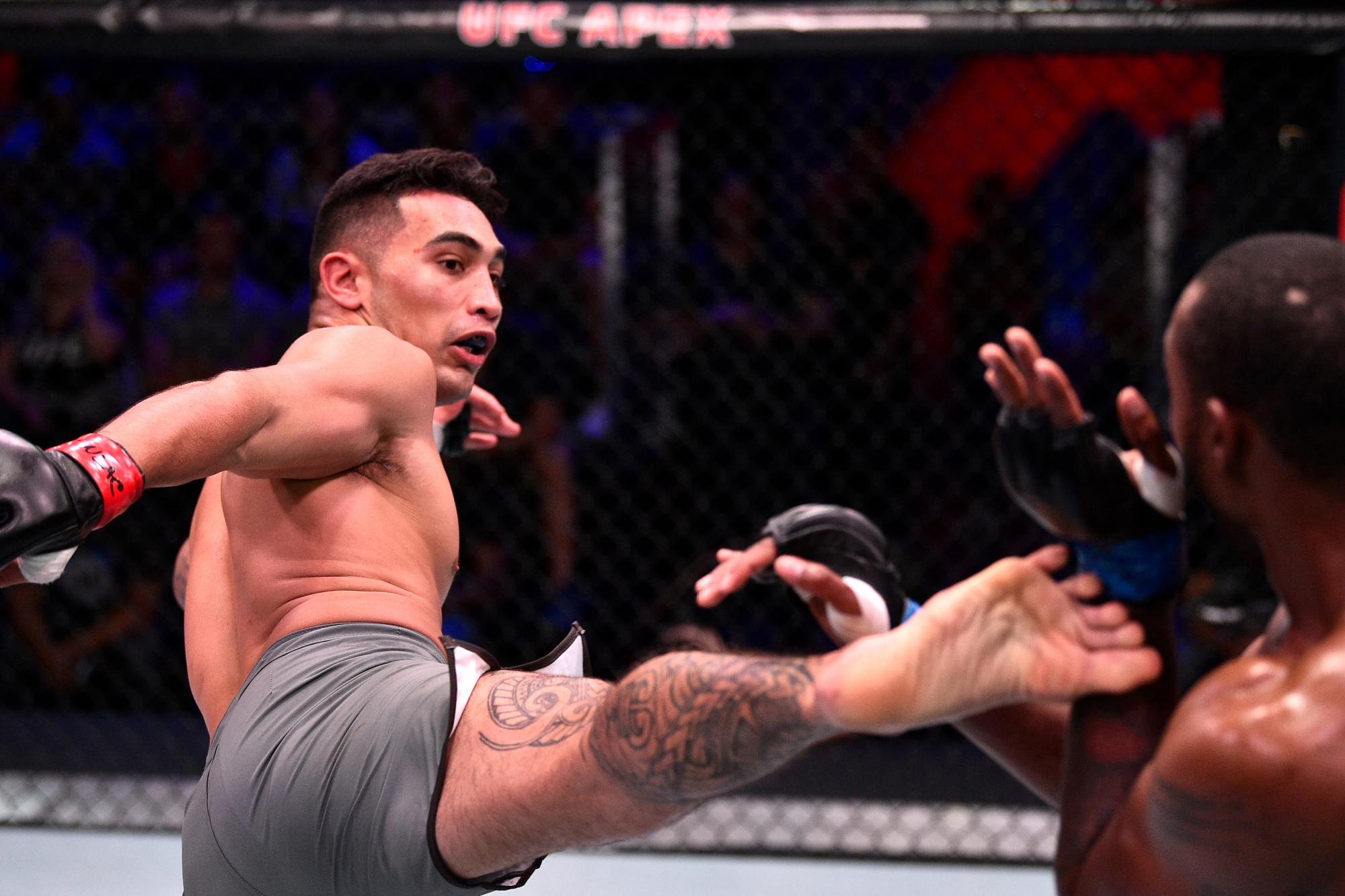 Punahele Soriano More Motivated Than Ever

A few days after winning his UFC contract, Punahele Soriana was already ready to get back into the cage.
By Thomas Gerbasi • Jul. 24, 2019

How does one define a Hawaiian fighter? It’s pretty simple. Take some of the nicest people you will ever want to run into, put them in a ring, Octagon, or cage, and then watch the beast come out. And when it’s over, it’s back to that nicest people in the world attitude. Oh yeah, and they’re all heart.

“Yeah, one hundred percent, that’s me to a tee,” laughs Punahele Soriano, a proud native of Oahu and one of the newest members of the UFC roster.

Back on June 18, fight fans got so see all sides of the 26-year-old middleweight when he battled and beat Jamie Pickett on week one of this season’s edition of Dana White’s Contender Series, and he has mixed feelings about how everything went down.

“When I look back now, I’m kind of embarrassed I cried and all that, but I still feel the same,” he said. “I really wanted the finish, and I still feel the exact same amount of disappointment. It was just a crazy time.”

A week after the biggest win of his career, Soriano was back home in Hawaii to take some well-deserved time off, but he admitted that, “I’m having a hard time enjoying my vacation because I just want to get back to work.”

Think about it. Soriano just won a huge fight, one that earned him a UFC contract, yet it still stings that he had to “settle” for a decision win, and he can’t wait to show more of what he can do when he has “UFC” on his four-ounce gloves. As for crying when it was over, that shows that he cares. Wanting a finish? That shows he cares about his work. Both are good things, and they bode well for his success in the Octagon, and everyone around him appears to agree.

“Actually, that’s one thing I was a little surprised about,” he said. “I’ve read some comments here and there and some people would reach out and text me, and they were really understanding, telling me to keep my head up and stay positive. Even though I won the contract, they were still trying to support me, which was really nice. I didn’t think anyone would understand, because I didn’t even understand why I felt like that.”

That’s because while Soriano went 15 minutes with Pickett, he dominated the action, always looking to end matters before he walked away with a shutout verdict on the scorecards. The win lifted his pro record to 6-0 with five finishes, and as soon as the dust settled, he wanted back in.

“Maybe two or three days after the fight I was already itching,” he said. “I went to the (UFC) PI (Performance Institute) already and I was trying to set up a routine to get ahead of the game for whatever’s next for me.”

So what’s next? Whatever the UFC wants to give him, he’ll take.

“I’ve got some nicks and bruises I want to heal up, but that shouldn’t stop me from anything, so as soon as they give me an opponent, a date and a venue, I’m all in.”

That’s a Hawaiian fighter, one eager to do his island proud.

“I actually feel more motivated than I’ve ever felt in my entire life,” Soriano said. “I feel that fire. Like I said, I can’t enjoy this vacation. I’m up early and I’m never up early. (Laughs) I’m trying to run and do everything I can to stay ahead of the game.”