UFC Middleweight Punahele Soriano Is Finally Feeling Like He Belongs Competing With The Best And He's Ready For Roman Kopylov At UFC Fight Night: Strickland vs Imavov
By E. Spencer Kyte, on Twitter @spencerkyte • Jan. 12, 2023

A childhood dream that started taking shape on the school bus will finally come true on Saturday night, as Punahele Soriano and Dan Ige will step into the Octagon one after another on the main card of the weekend’s initial event of 2023.

“We’ve been preaching it all this week, but we’ve been manifesting this since we were in high school,” said Soriano, who takes on Roman Kopylov before Ige squares off with fellow veteran Damon Jackson in the co-main event. “Just kids on the bus, always talking about being in the UFC, what it’d mean to be a fighter.

“It feels so natural, feels so right; I’m enjoying every second of this.”

This isn’t just two guys that knew each other a little back in the day, drifted apart, and have now crossed paths again — their shared vision having brought them back together on the same card in a fun bit of happenstance.

This is something Soriano and Ige have actively been pursuing since those early days on the school bus in Hawaii, with Ige often serving as the trailblazer and Soriano following in his footsteps.

“I always say that I introduced Dan to wrestling, and from the point on, I followed his lead on everything else,” laughed the affable Soriano, who snapped a two-fight skid with a second-round knockout win over Dalcha Lungiambula on Long Island in July. “After that, Dan graduated and went to college; I went to college with him. Dan started training; I started training shortly after. Dan moved to Vegas; I moved to Vegas. Dan gets to the UFC; I get to the UFC.

“I’m just right there alongside him… or I guess one step behind him.”

As Soriano wrote in a recent Instagram post tracing their shared journey, it’s been North Shore, Oahu to Wartburg College in Waverly, Indiana, to training at Xtreme Couture in Las Vegas and fighting in the UFC, which makes it surprising that they don’t live on the same block now.

“It’s funny because back home in Hawaii, we literally lived 10 minutes walking distance away from each other, but here, we live pretty far apart,” said Soriano, laughing, when asked if Ige has ever playfully snapped at him to quit following him. “He’s never been like that, though — he’s always the one that’s like, ‘You should come!’

“That’s literally all he says is ‘You should…’ and whatever the next thing is, I say, ‘Okay’ and just follow.”

This weekend, Soriano is the one taking the lead, serving as the first of three members of the Xtreme Couture team making the trek into the Octagon to close out the night, with Sean Strickland following Ige into the cage to take on Nassourdine Imavov on short notice in the five-round, light heavyweight main event.

It’s a role the ascending Hawaiian middleweight takes pride in, and after a couple years of getting his feet under himself on the big stage, he’s ready to start taking real steps forward in 2023.

“I think regardless of how any of us do, we’re going to go out there and perform to the best of our abilities, but I feel like it’s an honor that I get to set the tone for Dan and Sean,” offered Soriano, who carries a 9-2 record overall into his clash with Kopylov this weekend. “I love it. I love that pressure. I want to turn it to diamonds and start the night off right for us.

“I’m finally starting to feel like I belong,” continued the heavy-handed Hawaiian, who has earned six of his nine victories by way of knockout or technical knockout. “It’s no secret that I came in real early in my career, real green. I still have so much to learn, so much (growing to do), so much potential — I’ve got so much room for growth, and starting to feel like I belong is the first step.

“I’m ready to see how good I can be. I’m going out there to test myself.”

Like many young athletes with ambitions of greatness, an unquenchable thirst to compete, and extremely high standards for themselves, Soriano struggled at times with struggling inside the Octagon.

After winning eight straight to begin his career, including each of his first two UFC appearances, one on either side of a hip injury that cost him all of 2020, he dropped consecutive contests, and entered his bout with Lungiambula in July wondering if his job was on the line.

But after bouncing back with an impressive finish — and a spur-of-the-moment victory celebration — in the summer, the 30-year-old middleweight was able to give himself some grace and recognize that what he’s doing isn’t easy. 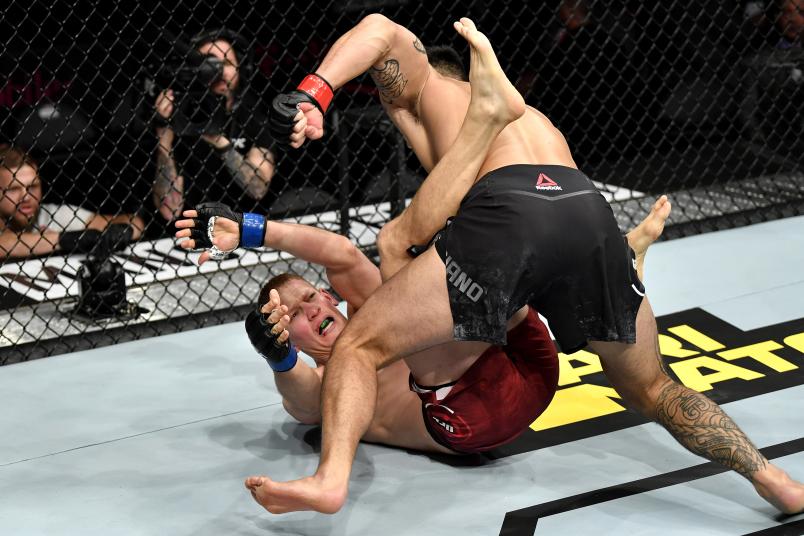 Punahele Soriano punches Oskar Piechota of Poland in their middleweight bout during the UFC 245 event at T-Mobile Arena on December 14, 2019 in Las Vegas, Nevada. (Photo by Jeff Bottari/Zuffa LLC)

“I’m learning on the job, at the highest level,” said Soriano, reminding himself of the difficult task he’s undertaking. “You see a lot of guys that try and do that, and sometimes, they’re not very successful. I feel like that’s something that goes overlooked with me — that I am learning at the highest level, on the biggest stage. I am getting way better with every fight and I don’t think my growth with ever stop.”

And after a victory over Lungiambula that showed him that everything he’s done in order to get to this point in his professional life and everything he’s doing now to keep moving forward is working, the proud Xtreme Couture representative is ready to take the fight to Kopylov on Saturday and become the guy that no one in the division wants to fight.

“I expect a tough, tough opponent,” he said of his Russian adversary, who also snapped a two-fight skid with an impressive stoppage win last time out. “I’ve been privileged to train with a lot of guys from Russia, from that region, and I know how dangerous all of them are. I expect to go out there, be the same me, but better — put the pressure on him, hit him as much as I can, put him on the ground if I can.

“When I fight my fight and I fight as hard as I can, I’m the bad draw — I’m the fighter that no one wants to fight, and I look to be the bad draw every fight.”