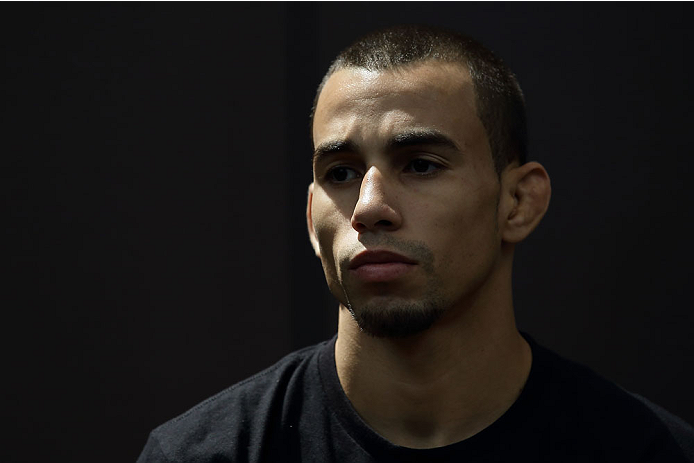 Boxing legend Marvin Hagler said it best when he declared that it was tough to get up in the morning to do roadwork when you’re sleeping in silk pajamas. You could also say that Providence’s Sean Soriano and Boston’s Charles Rosa will have a tough time thinking about a New England rivalry while training under the sunny skies of south Florida.

Not so, says Soriano.

“You forget that you train in Florida and you remember where you’re from, so now it’s a Providence vs. Boston thing,” he said of next Sunday’s UFC Fight Night bout in Boston against Rosa. “Then it also goes to a Blackzilians vs. American Top Team thing.”

Training at Boca Raton’s Blackzilians gym, Soriano knows there’s always a little extra attached to a meeting between one of his teammates and a member of Rosa’s American Top Team squad, and when you add in the local flavor to the mix, this is a fight that has a lot of people talking up and down the Eastern seaboard. Yet for all the chatter, the 25-year-old Soriano is focused on the most important thing of all – winning.

“I take pride in where I’m from and I’m pretty sure he does too,” Soriano said. “And I like to represent my team and represent my city to the fullest, so it also plays a part. You don’t want to lose to the rival school or the rival city. But I’m really focused on getting the win more than anything.”

Entering his third bout in the UFC, Soriano is in a tight spot, having lost his first two Octagon matchups to Tatsuya Kawajiri and Chas Skelly. The featherweight prospect showed flashes of the talent that got him to an 8-0 pro record in both fights, but in the end, he fell short of victory. He makes no excuses for the result of his first two bouts in the UFC, but he did pick up some valuable lessons.

“There’s something in fighting that you can’t buy and it’s experience,” he said. “I like to fight so much that sometimes I get too emotionally attached to it and I want to strike and want to do this or that, but it opens me up for certain things, like for a wrestler to take me down. And I’ve been training my stand-up so much over these last couple years that I forget that I’m a state champion in wrestling. But you can’t just be one thing, especially in the UFC, so those last two experiences in fighting Chas Skelly and Kawajiri are gonna help me. I’m just gonna take my time, I know what he’s gonna do, I’ve been there before and once the fight turns to my favor, then I can have a little fun.”

If there’s any hope regarding his upcoming fight, while Rosa is a submission specialist, he’s not a swarming wrestler. Soriano laughs. But he’ll take it.

“He (Rosa) says he trains in Holland with some kickboxers, so let’s see if he can back up that talk a little bit.”

A stand-up war would certainly please Soriano, but as he mentioned earlier, at this level of the game, you’re going to have to be prepared for everything. He knows that now, and he’s prepared accordingly.

“I’m dying for someone to actually stand up with me a little bit and give these fans what they really want to see,” he said. “But I haven’t said no to any fight – they offered me the fight and I said yes. So I’m just gonna go with a little different approach. It’s better that I know he’s not gonna smother me and lay on top of me, but I know he’s slick off the ground, so it’s just being more cautious and more careful with what I do.”

And with a full camp under his belt (he took Kawajiri on short notice) and no injury drama (he went through two staph infections in the lead-up to the Skelly fight, basically leaving him with a three-week training camp), Soriano is at peace before the battle with Rosa begins.

“It’s so much better now and that (having a full camp) plays a big part in how you train and how you mentally prepare for a fight, knowing that you did everything possible, instead of rushing things.”

As for going back to New England for a big fight, he’s been there and done that with his bout against Skelly taking place at Foxwoods in Connecticut. It may not sound like a big deal, but until you’ve done it, it is.

“It helps, because you get those first jitters out of the way, and you stop worrying about the whole home crowd thing and what people are going to think and who’s going to come to see you,” Soriano said. “Now I’m just focusing on my fight and I’m gonna represent where I’m from, my team, and whoever’s coming to see me on that night.”

And when you come from a state that has produced boxers like Vinny Pazienza, Peter Manfredo and Demetrius Andrade, representing that combat sports legacy means a lot.

“Providence has had its ups and downs, and you have to be tough and you have to grow up being able to defend yourself and protect yourself,” he said. “That’s what made me and makes Providence people who we are. It builds our character. It’s why I’m not scared to take a fight against anybody. I’ve been through worse.”