The Proud Return Of Devonte Smith

Want to know how long UFC lightweight prospect Devonte Smith has been out of action? Long enough that when you do a Google search on his name, a ton of results come up on Devonta (with an A) Smith, the 2020 Heisman Trophy winner for Alabama.

“The crazy thing is, a lot of people have been tagging me and him because they think I'm him,” laughs Devonte (with an E). “If you just look at what I do, my page explains it all. There's hella females in my DMs now, telling me 'Good game, babe.' Did you guys look at his face and then look at my page? Not one thing about football is on my page.”

It’s the price one pays for being on the sidelines for the last 17 months, a layoff Smith has struggled through, as he not only had to rehab a ruptured Achilles tendon, but also deal with the tragic death of his sister Dariene, just 23, as well as the doubts that came along with his first UFC loss to Khama Worthy at UFC 241 in Anaheim.

But now, with his return imminent, “King Kage” is feeling like his old self again.

“I'm ready,” said Smith. “I'm very excited for the opportunity to do what I love and to win. That's all I'm focused on - train, fight, win and then move on to the next step. I’m ready to get this fight going so I can start my year off right.

Smith’s return next week against an opponent to be named is a welcome one, considering that the Ohio native is still one of the top prospects in the UFC, despite his recent defeat. But the 27-year-old is the first to admit that there were some doubts after he lost to a good buddy in Worthy, a late replacement for Clay Collard, who was a replacement for John Makdessi.

“I could blame a billion things,” he said of the Worthy fight, which marked his first loss since 2017, snapping a six-fight winning streak that included two knockout wins in the UFC. “It took me a while, but I just accept it for what it is, and that's a loss. Dominick Cruz lost, Max Holloway lost, Conor McGregor lost. But they didn't let that break them.”

Smith wasn’t broken by the defeat, but when he ruptured his Achilles, then the voices in his head grew louder. 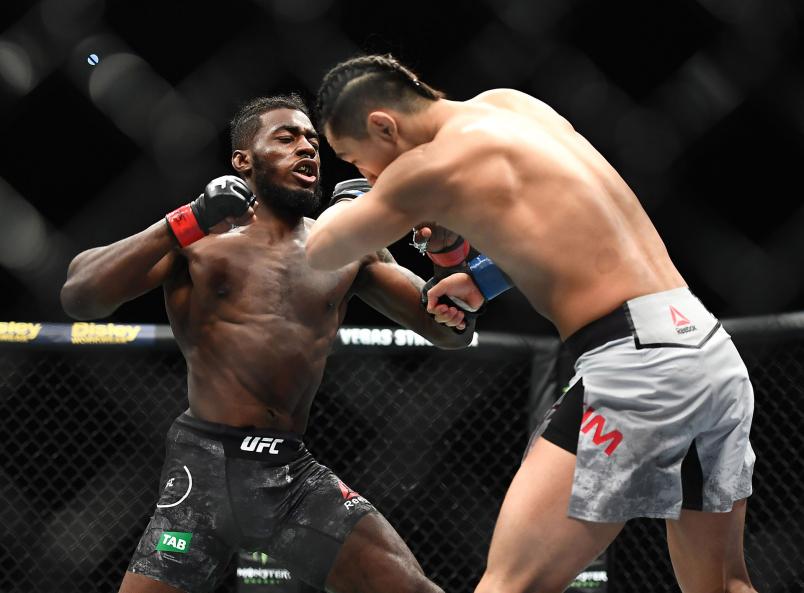 Devonte Smith lands a punch in his fight against Dong Hyun Ma in their Lightweight fight during UFC234 at Rod Laver Arena on February 10, 2019 in Melbourne, Australia. (Photo by Quinn Rooney/Getty Images)

“It was like, 'Is this still for me?'” he admits. “I was like, 'Damn, I lost my fight, ruptured my Achilles, they're talking about six to eight months, a year at the latest just to make sure everything's good, and it's that time of just sitting there, not able to walk, not being able to do things, and then my body's tightening up because I can't stretch a certain way or move a certain way. And me not being able to physically move, it was driving me crazy. But after a couple months, I got the feeling to beat people up again. (Laughs) It never left, but depression sets in a little bit with all this stuff happening. But I stayed focused.”

Once dealing with the physical pain of the injury and the emotional pain of the loss of his sister subsided, or at least got manageable, Smith had to deal with the aftermath of a fight no one expected him to lose, and how he was going to move on from that.

“For me, there's something about losing; it feels like it eats at my soul,” said Smith. “And then knowing that I lost to somebody that I was close to, it changed my mindset. If I would have won, I don't know where my mindset would be. But my mindset now, it's business. I'm glad and happy he (Worthy) is in the UFC, but I still feel some type of way. (Laughs) And I'm not blaming him because he came to do what he needed to do. But me, I wasn't mentally there to truly hurt a friend, somebody that I was cool with. And that was my hang-up. So kudos to him, congratulations, but what he has done is make it bad for everybody. So if I know you, don't know you, we had drinks together, chilled together, and now we've got to fight, I'm taking you out. That's how I feel because when I look at that fight, it burns me. I was thinking too much. Because I was cool with him, it made me think too much. And again, he won, I'm taking nothing away from him because I learned so much from it. I feel like I went over a hurdle that I didn't think I needed to get over and I'm over that hurdle.”

All he needed then was a fight, and while expectations are high for his return in Las Vegas, where he earned a UFC contract with a first-round finish of Joe Lowry on season two of Dana White’s Contender Series in 2018, Smith isn’t concerned with reintroducing himself to the masses; he’s going to the Apex for one reason only. 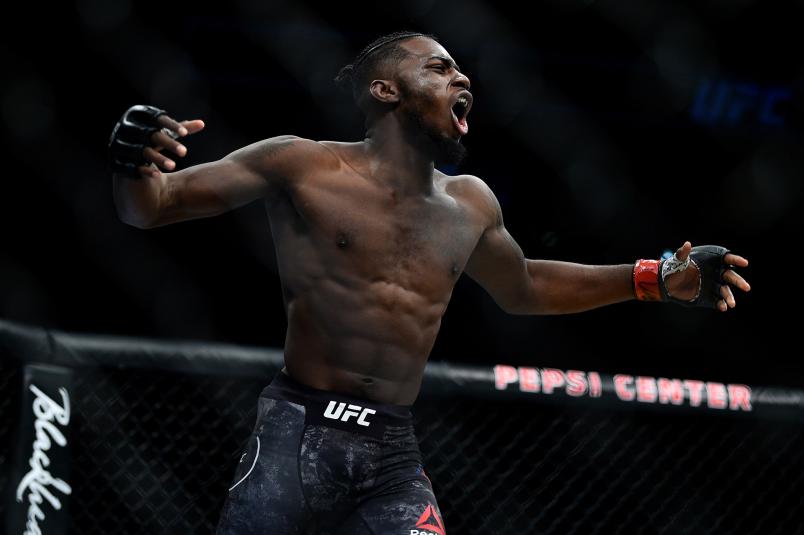 Devonte Smith reacts after knocking out Julian Erosa in their lightweight bout during the UFC Fight Night event inside Pepsi Center on November 10, 2018 in Denver, Colorado. (Photo by Chris Unger/Zuffa LLC)

“The only thing I'm focused on is winning,” he said. “Everybody can put on me whatever they feel they want to put on me, but that's just what they think and how they feel. That's not what I think or how I feel. I'm only focused on the fight. So if people are like, 'Who's that guy?' I won the fight. 'Oh, that's who he is.' (Laughs) My values and morals aren't their values and morals, so I don't feel like I have to prove anything to anybody because I don't care. All I'm focused on is winning. I'm not really into all that extra stuff that's really irrelevant at the end of the day.”

Devonte (with an E) Smith would likely toss 2020 to the trash bin in the same way so many others have, but it’s clear that the experiences he went through made him stronger, because as he approaches a new year, he sounds like he’s got it all figured out.

“I don't think I've got everything figured out because there's still some unknowns out there, but it's life experiences, taking Ls and not seeing them so much as bad things, because in life, you're gonna fail,” he said. “I'm dedicated to my craft, and just because you beat me, it don't mean nothing.”

Smith laughs, letting the world know that it does mean something.

“The worst thing you can do is beat me, so I'm gonna do everything I can to make sure I don't have this feeling again.”