Proof's in the resume - Magny just wants to fight 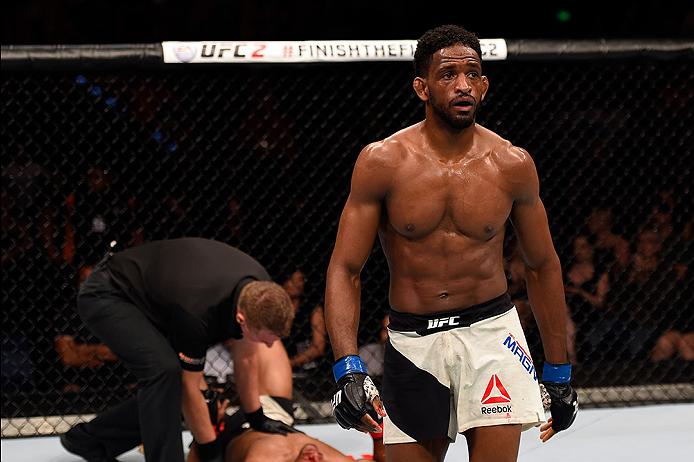 While the very small number of fighters above him in the welterweight rankings are carefully planning their next step and trying to set themselves up for the biggest pay day possible, Neil Magny just wants to fight.

The most active fighter in the UFC over the last three years, the 29-year-old Colorado resident, who sits at No. 7 in the rankings, has only fought once in 2016, collecting a third-round stoppage win over Hector Lombard in one of the most chaotic clashes this year. After surviving a dire first-round onslaught from the former Cuban Olympian, Magny turned the tables on Lombard and went on the offensive, finally earning the stoppage just a few seconds into the final round.

It was Magny’s 10th victory in 11 fights dating back to the start of 2012, when the former Ultimate Fighter contestant stepped into the cage at UFC 169 on a two-fight losing streak. Since then, he’s established himself as one of the top welterweights in the world and all the sitting around he’s done since dispatching Lombard is keeping him from continuing to prove that fact.

“It’s definitely something I didn’t plan for,” Magny admits, the frustration of spending the last several months on the sidelines evident in his voice. “I’d love the opportunity to stay active, stay busy, but as you start climbing the rankings, your options (as far as opponents) start getting more and more narrow, I’ve noticed.

“There are a lot of fights I wanted for this year, but for some reason, they haven’t come my way. I was calling out guys in the Top 5 and some of them were considering retirement rather than fight me, so it just hasn’t been a real busy start to 2016 for me.”

After an inordinate amount of time on the shelf (for him), Magny will finally make his sophomore appearance of the year, squaring off with Lorenz Larkin in the UFC FIGHT PASS Featured Prelim at UFC 202 this weekend in Las Vegas. Originally scheduled to face Dong Hyun Kim, the adjusted pairing with Riverside, California’s Larkin is one that doesn’t make a lot of sense for Magny on paper.
RELATED CONTENT: Magny vs Larkin exclusive on UFC FIGHT PASS | Magny fighter bio

Larkin is unranked, but dangerous, the kind of opponent that doesn’t do much to help bolster Magny’s case for a bigger fight next time out, but someone very much capable of handing the welterweight world traveler a loss.

“I’m at a point in my career now where – it may sound cliché – but every opportunity to compete is a blessing for me and it’s either an opportunity for me to win or learn,” explains Magny, who has won three straight heading into Saturday’s encounter with Larkin at T-Mobile Arena. “So I’m not really afraid of taking that chance and fighting guys who aren’t ranked or who are ranked below me or something like that just because I’m out there to prove I’m one of the best welterweights in the world.

“Even though he’s not ranked, he’s definitely a tough opponent,” he says of Larkin, who first rose to prominence as a light heavyweight prospect under the Strikeforce banner. “He was the only guy to beat Robbie Lawler outside of a championship fight in the last four years, so he’s definitely a good opponent for me to go out there and test myself against. A strong performance against him puts me right in there for title contention, so I just have to go in there, do my best and see what comes next.”

As keen as he is on staying active and continuing to prove himself inside the Octagon, Magny is also acutely aware of his surroundings and the awkward place he’s in as a Top 10 welterweight.

Not only is the division in a state of flux with a new champion recently ascending to the throne and perennial contenders stumbling, but several of the tenured members of the 170-pound weight class are at very different stages in their careers and their lives than he is and that makes it difficult for the eager, singularly focused fighter to get the opportunities he covets.

“A lot of guys that are ranked above me, in the top positions, they’re at a different stage of their career,” he says. “Right now, things like family and children are more important to them.

“Take Tyron Woodley: he just won the belt - and congratulations to him – but immediately after he won his fight, he calls out a guy that hasn’t won in five years. I understand why he did something like that because, at this point, having money to send his kids to college and providing for his family is more important to him than going out there and proving who is the best, but for me, that’s my motivation. 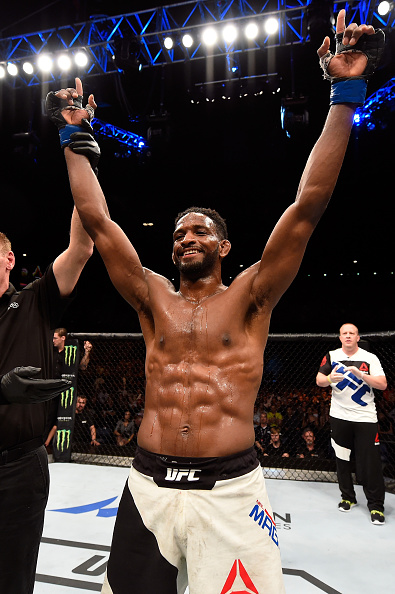 “I get out of bed every day and work hard to prove I’m one of the best welterweights out there and for so many guys in the division, that’s not what’s on their agenda right now. For them, it’s more like, ‘I’m not going to be able to fight forever, so I need to provide for myself once I’m done fighting and how can I do that? What fight can I take right now that is going to set me up for a good life outside of the cage?’ They’re holding out for those fights where they can make a lot of money, leave the sport and live comfortable.”

It’s clear that the situation frustrates him, but the ever-positive Magny isn’t letting that slow him down, and with four months left in the year after his fight with Larkin, he’s hopefully that things might actually even pick up a little before 2016 comes to a close.

“I honestly think it’s just a waiting game at this point,” he says of getting some of the high-profile matchups his recent results in place in the rankings command. “I’m fighting August 20th, so that gives me four more months to fight. I’ve competed in a lot of fights in that matter of time, so I’m just worried about going out there, performing my best and taking it from there.”