The Progression Continues for Nurmagomedov

"I respect all of the fighters, no matter who it is. Everyone trains daily with a goal of becoming a UFC lightweight
champion." - Khabib Nurmagomedov 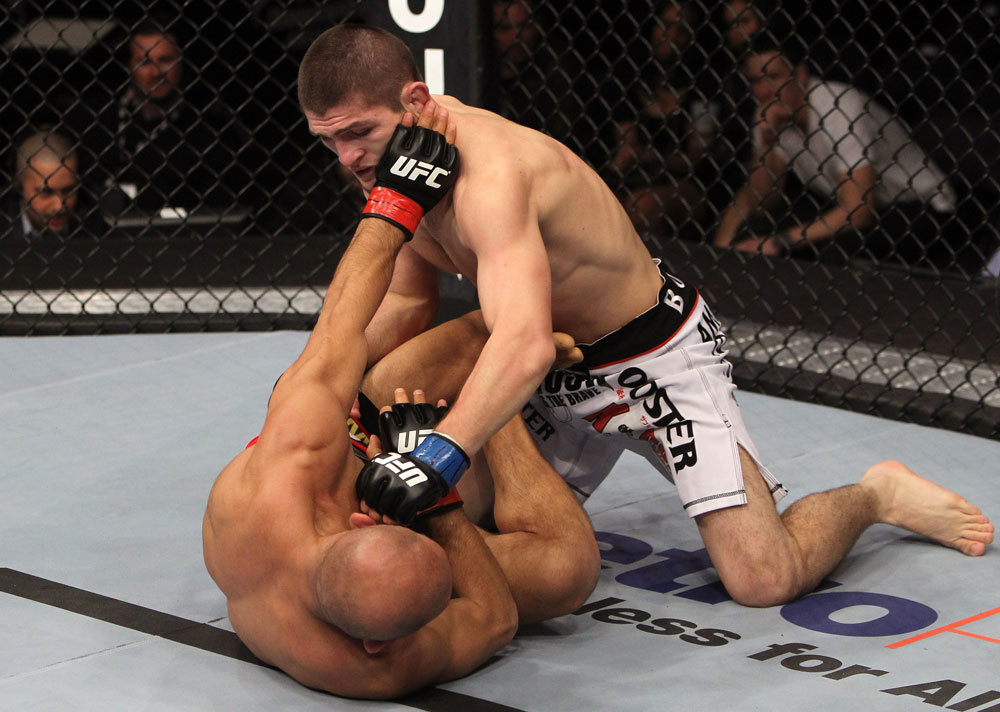 With the UFC’s plan for global expansion in full swing, it is no surprise that prospects and contenders are beginning to emerge from all corners of the world. Talented fighters are pouring into the organization looking to test themselves on the sport’s biggest proving ground, and thus far, Russia-born prospect Khabib Nurmagomedov has answered every challenge with flying colors.

In his Octagon debut against Kamal Shalarous at UFC on FX 1 in Nashville, the 24-year-old Dagestan native capped off an impressive performance by submitting the former WEC standout in the third round of their tilt. Nurmagomedov faced another tough challenge in his next outing against veteran Gleison Tibau, but much like his debut, the AKA-trained fighter stayed one step ahead of the opposition as he bested the powerful Brazilian by way of unanimous decision.

Despite his age, the move from Russia to the United States was a long time coming. After racking up 16 consecutive victories and seeing the stateside buzz begin to grow, Nurmagomedov felt a move to train and fight full-time in the United States was a necessity. Once his UFC career got off the ground, the undefeated prospect made the move to train at San Jose’s American Kickboxing Academy, where Nurmagomedov has had zero troubles settling in.

“The transition was smooth,” Nurmagomedov said. “I have been in San Jose for over a month now and I am in great shape. AKA is the best MMA club in the world and there are a lot of top fighters training here. Every sparring session and every training session I have to give 100%. I am progressing well here and AKA is a team I’ve been wanting to be part of since my childhood. It’s a family first and then a team.”

While Nurmagomedov continues to progress his skills as a mixed martial artist, he will do so on the strength of a solid grappling background. “The Eagle” has garnered acclaim for his accomplishments in Sambo, winning the Russian championship, and then claiming a grappling world championship in the coveted NAGA tournament in 2012.

The success he’s experienced is a validation for the talent he possesses, but Nurmagomedov has remained humble throughout.

“All of my achievements in the sport are possible because of God,” he said. “I thank him every day for my father, who has trained me all of my life and made me the man I am today.”

Saturday night, Nurmagomedov will take his 18-fight win streak into Sao Paulo, Brazil to face Thiago Tavares at UFC on FX 7. The Brazilian is a 12-time UFC veteran with three of those performances earning Fight of the Night honors. The bout between the two lightweights is an interesting matchup on several levels, as both are accomplished grapplers who have shown a willingness to stand and trade.

Another potential factor affecting the fight is the difficulty of fighting a Brazil-born fighter in front of a passionate home country fan base. Nurmagomedov isn’t concerned about the experience of his opponent or the environment in which the fight takes place. He is simply ready to fight.

“I respect all of the fighters, no matter who it is,” Nurmagomedov said. “Everyone trains daily with a goal of becoming a UFC lightweight champion. I am well prepared for this fight and if he wants to keep it on the feet he will get a good fight. [Experience] does not matter to me. Every fight you learn something new and whoever is ready physically and mentally will win the fight.

“Maybe my opponent thinks that I may be under pressure since I am fighting in his homeland. If it mattered to me I would have not taken the fight. I know it will be God’s will whether I win or lose.”

The bout with Tavares will mark his third showing in the UFC’s lightweight division. Over the past three years, the 155-pound weight class has become one of the most competitive in the organization, with a shark tank of talent fighting for divisional position. While Nurmagomedov acknowledges the fact he is new to the picture, it doesn’t stop him from looking to climb the ladder in the quickest route possible...and he’s naming names.

“There is always talk of who is a better fighter and which style is better,” Nurmagomedov said about the lightweight division. “There are a lot of fighters with different styles and I just focus on training hard for the fight and show results. God willing, I win this fight and then I want to fight Nate Diaz next in San Jose on April 20th. First I need to beat Tavares.”

When the Octagon door closes this weekend in Brazil, Nurmagomedov will not only be looking to take the next step of his career, but make a statement in the process as well. With the talent he possesses, the sky is the limit, and with the UFC’s continued push to take their show to every major market in the world, Nurmagomedov could potentially one day be stepping into the cage and looking out at his own countrymen.

“MMA is becoming very popular in Russia and especially UFC,” he said. “I am pretty sure the UFC could get large crowds north of 20,000 people if they hold an event in Russia, Dagestan in particular.”