Professor Pyle - Class is in Session

"This kid ain’t using me to keep building this make believe hype he’s got going around. That’s for damn sure.” - Mike Pyle 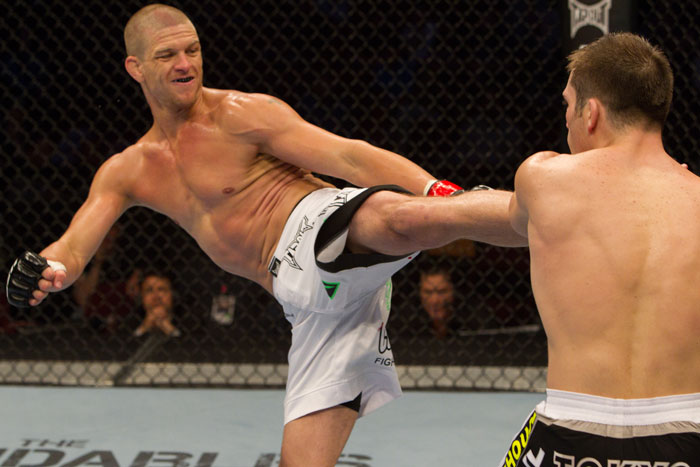 You could say it’s Groundhog Day for Mike Pyle. A veteran welterweight fighting the hot prospect looking to leap to the next level, that’s old hat for the Tennessee native. So is this scenario a good thing or bad thing for the man trying to keep young gun Rory MacDonald from using him as a stepping stone?

You wouldn’t expect any other answer from Dresden’s finest, a 35-year old who pinned the first loss on unbeaten Brit John Hathaway’s perfect record last October, and who would like nothing more than to be the spoiler for 22-year old Canadian MacDonald, one of the most promising youngsters in the sport. Pyle doesn’t necessarily agree with that notion though.

“He had his chance against (Carlos) Condit (at UFC 115) and he dropped the ball and got beat up real bad,” said Pyle of MacDonald’s lone pro loss. “Obviously that’s what happens to him when he steps up in competition and gets hold of an experienced fighter – he kinda crumbles under the pressure and the experience. Hathaway had beaten some very good names and very tough opponents, and developed some pretty good hype about himself. On the other hand, MacDonald, I don’t feel like he’s really done anything in the UFC and I don’t understand where the hype’s come from. He subbed Mike Guymon, he came in and had somewhat of a close fight until Condit beat the hell out of him, and then he fought a 155-pound fighter (Nate Diaz) and suplexed him a couple of times and still wasn’t able to finish him. So I don’t know what all the talk’s about.”

“The kid hasn’t done anything,” he continues. “He doesn’t even have a win streak in UFC; I got three in a row. Is this kid dangerous? Yes. Those are four ounce gloves. You can get knocked down super easy in this sport; that’s what it’s all about. Does he have the talent? Yeah, he has the talent and potential, but he’s gonna learn from this fight. He’s just learning right now. He’s in the game learning, he’s young, and this is gonna be a learning lesson for him. This kid ain’t using me to keep building this make believe hype he’s got going around. That’s for damn sure.”

When you talk about veterans giving it to you straight, no filter, Pyle’s your man. And he’s not one of those guys talking about the good ol’ days with nothing to back it up. If you recall, when Pyle made his pro MMA debut in 1999, it was against Quinton Jackson. Yeah, that Quinton Jackson, and he went 15 minutes with him, losing a decision. His next fight was Jon Fitch, who he submitted in the first round, so you sorta get the picture now.

“I’ve been around the block, I’m world-traveled in fighting, I’ve been in (opponents’) hometowns, I’ve been in my own hometown fighting, I’ve done it all and seen it all, and I feel there’s nothing the kid can throw at me that I’ve never seen or be able to deal with,” he said. “On the other hand, I think it can work in reverse on him. One thing he’s gonna feel is just a ton of experience on top of him, and that’s the plan.”

The plan is also to make sure MacDonald relives round three of the Condit fight as soon as the opening bell rings. In that bout in June of 2010, MacDonald roared out to a two rounds to none lead before Condit came back and stopped his foe with less than 10 seconds left. MacDonald made no bones about the fact that he was crushed by the loss and that it was his lack of experience that did him in. But in his next match, MacDonald didn’t look any worse for wear as he dominated Nate Diaz over three rounds at UFC 129 in April. Pyle isn’t convinced, and he’s going to make that clear in Philadelphia this weekend.

“Oh, he’ll feel it,” said Pyle. “He’s gonna know immediately that despite being real eager to come out and get me and get after me, his young eagerness is gonna fall right into my old, salty vet experienced hands perfectly. Let him come out aggressive and try to redeem himself and make himself feel better about the Condit fight. Please come out there and be overaggressive, please do so. I invite you.”

Pyle is just warming up now. Even an observation from outside the cage that his most recent win (at UFC 128) over Ricardo Almeida wasn’t his best performance, but instead a mature one that showed he could still get the win without being spectacular, drew his ire a bit.

“You might feel like I didn’t perform at my best, but I still beat Almeida, who’s been around, been in PRIDE and fought some really good fights in UFC, and I beat him on a night I didn’t perform well, so thank you for that,” he said. “Secondly, I felt like it was a good performance, and I did exactly what I needed to do. It was Almeida who kept crowding me and trying to just take me down and hug me against the fence. I was the one working the strikes, so I guess we won’t see eye to eye on that.”

What we did agree on was that styles make fights, and a mix of Pyle and Almeida was never going to be World War III. But the point is that while Pyle didn’t impress from start to finish like he did against Hathaway or turn up the heat in the third round and finish like he did with Jesse Lennox, he found a groove against a tough opponent in Almeida and he found a way to win. In the process, he added to his longest win streak since 2008, and with four victories in his last five bouts, if he gets his hand raised, you have to look at him as a 170-pound contender. But here’s the problem – if he keeps saying how MacDonald isn’t ready for him, if he beats MacDonald, will he get the credit that he deserves?

“I’m not the one building him up like he’s done something,” he said. “That’s not my fault. I’m just saying I don’t believe his skill level is up there where they put him. And that’s just what’s going on in my head. It doesn’t matter what anybody thinks when I beat him. All I know is that I’m training my ass off to beat him, and wherever the UFC wants to put me and whoever they want to put me against, let’s do it.”

Yet as fired up as Pyle is for this UFC 133 bout, don’t expect to see him snarling at his foe or jumping around before being called to fight. That’s just not his style, and the way he sees it, if you’re a veteran, you act like one.

“In my head, I’m not thinking ‘how can I jump up and down and look all crazy to this guy and maybe intimidate him,’” he said. “If that’s on your mind, then you’re probably not straight on what you need to, which is staying focused. That guy is just as nervous as you are, and if they say they’re not, they’re lying. So you just try to keep that all in and save that energy for fighting. I don’t like jumping up and down and trying to give him dirty looks and all that. For me, it’s just a waste of time. Let the fighting do the talking.”

That’s what Pyle has done since 1999, and he doesn’t feel like the end of this ride is coming anytime soon. In fact, he feels better than ever heading into this pivotal meeting with MacDonald.

“I feel like I’ve got a good five years left in this game,” he said. “I’m a hundred percent healthy, I’ve got no wear and tear on my body, and I literally don’t have a scar on my face from fighting. Any scar that I do have, it’s from the gym, and it’s only one scar. I’m not an in your face, rock ‘em sock ‘em robot fighter, so I don’t have any years put on me, and I feel like I did when I was 20, and maybe even better because I smoked cigarettes when I was 20. (Laughs) I feel like I’ve got more years left and that I’ve finally settled in to the UFC, but I’ll never be satisfied or happy with a performance. I’ve got to get better each time because the UFC is the place to be, and I want to make sure I stay here.”

As for Rory MacDonald, Pyle knows that in this sport anything can happen, so, playing Devil’s Advocate, can he even fathom the idea that experience may not always be enough against a talented phenom?

He chuckles, and you know the answer before it even comes out of his mouth.

“Anything’s possible,” said Pyle, “but not against me.”