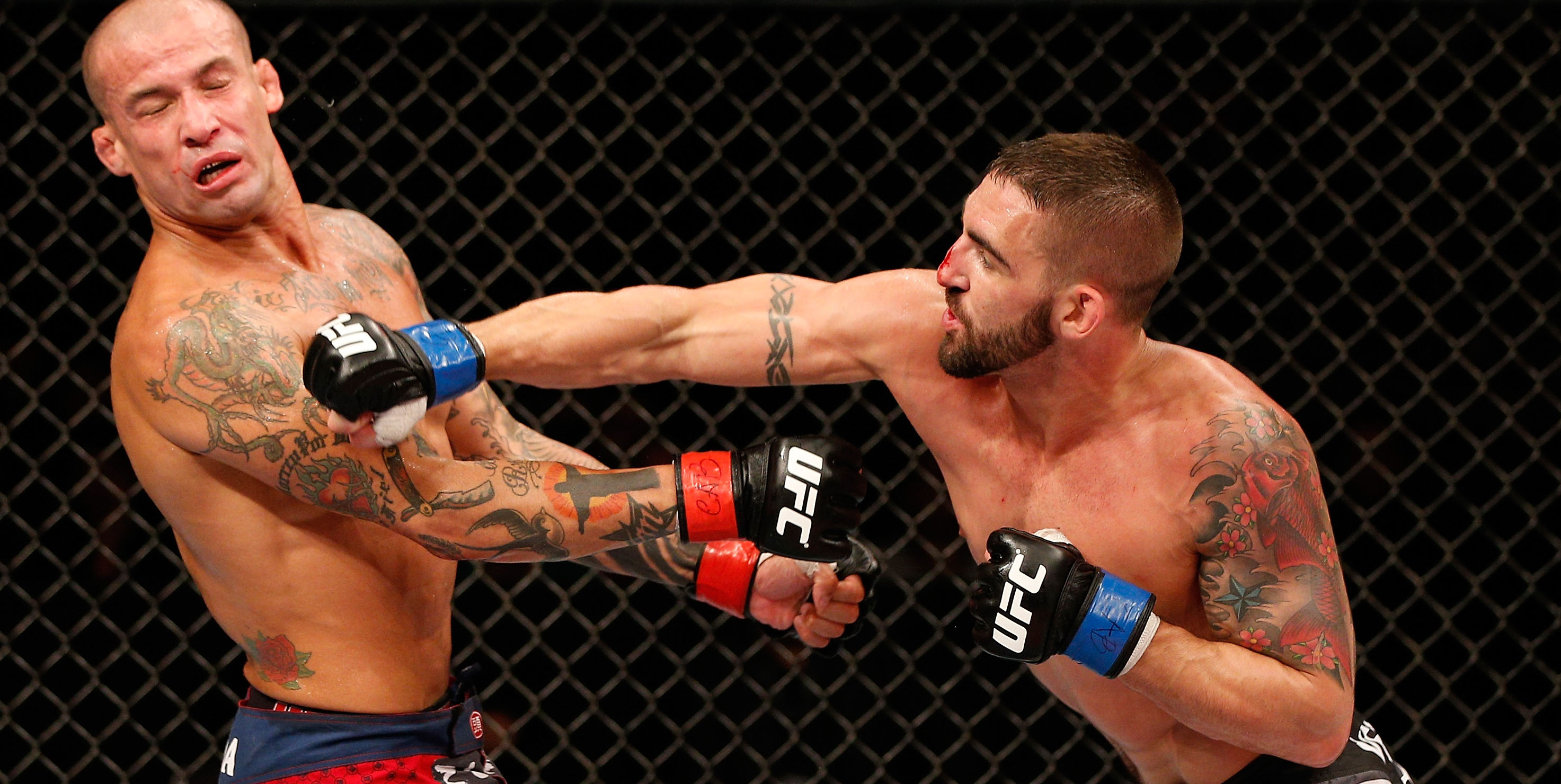 Proctor was the aggressor from the start, nearly sinking in a guillotine choke on two occasions in the opening two minutes. After escaping the second time, Marcello (13-6) took over from the top position on the mat and almost secured a foot lock, but after a rough patch, Proctor escaped and got back to his feet. One more guillotine attempt by Proctor followed, but again, Marcello fought free.

After a slow start to the second round, Proctor rocked Marcello with a right hand just before the three minute mark, certainly getting the Brazilian’s attention. Neither fighter was able to push the pace more than that though, as fatigue was clearly an issue for both.

A flush right hand buckled Marcello’s knees as the final round got underway, but the gutsy veteran recovered and went on the attack, flurrying effectively for a spell. As the round wore on though, it was Proctor landing more and more hard shots, with the exhausted Marcello remarkably staying upright.

The return of TUF Brazil 1’s Rodrigo Damm to the lightweight division was a successful one, as he won a three round decision over countryman Ivan Jorge.

The two groundfighters kept it standing for the first two rounds in this one, with Damm looking good in his return to the 155-pound weight class and Jorge getting in enough shots of his own to keep things close. After the two traded accidental eye pokes in the second, drawing a stern warning from referee Mario Yamasaki, the action heated up, with Damm landing some hard punches while Jorge responded with a knee to the head and punches of his own. It was Damm leaving Jorge bloodied though, as he opened a cut under his right eye just before the bell.

The bout finally went to the mat in round three, with Damm taking control immediately, but Jorge roaring right back with a tight D’Arce choke attempt. After escaping, Damm got to his feet, but he looked winded as Jorge aggressively pursued him. Damm’s counters kept Jorge at bay, but a subsequent submission attempt came up short. A borderline low kick by Damm brought a momentary halt to the action with 90 seconds left, and when the fight resumed, Damm – now bloodied himself - fired off hooks to the head in an attempt to finish his opponent. And while that end didn’t come, it was a big win for the veteran Damm. 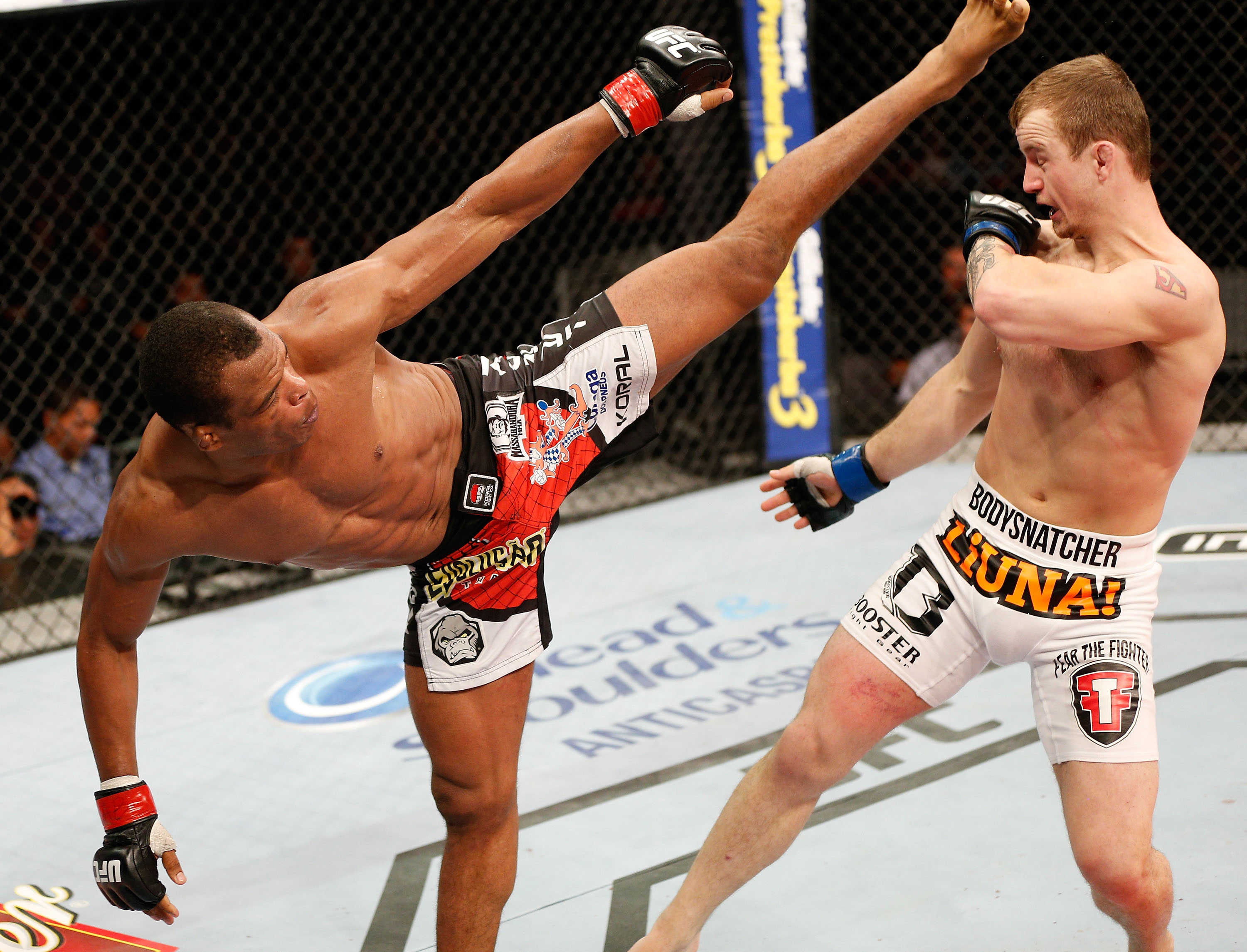 Ronson’s technically sound striking attack worked well in the first half of the opening round, but in the second half, it was the heavy hands of Trinaldo that began to take the fight over, as he nailed the Canadian with punch after punch. Ronson’s chin held up under the attack, and in the final minute he got back into his rhythm, leaving the judges with a bit of a scoring dilemma after a competitive first five minutes.

Methodical and effective with his standup game in round two, Ronson kept Trinaldo at bay for much of the frame, calmly picking at his foe with a nice variety of punches and kicks. And while Ronson kept the heat on for much of the final stanza, it was Trinaldo finishing the stronger of the two, a state reflected on the scorecards as well.

It wasn’t Iuri Alcantara’s best performance, but it was a winning one for the bantamweight contender against countryman Wilson Reis, as he pounded out a three round split decision victory.

Reis (17-5) got off to a fast start, getting Alcantara to the mat and going to work immediately, but Alcantara had the same mindset, and he quickly got into the dominant top position. Reis soon reversed position. After a re-start from referee Osiris De Medeiros, Reis went back on the attack as he sought another takedown, but Alcantara fought it off and dropped Reis to the mat with a punch to the head. Reis cleared his head and got back to his feet, and the two exchanged punches before trading takedowns in the closing seconds.

A thudding left hand by Alcantara (29-5 with 1 NC) knocked Reis down again in the first minute of round two, but in an ensuing scramble, it was Reis who got into the mount, where he let loose with punches and pushed his foe to the fence. Using the fence, Alcantara reversed, got into the top position and fired off strikes. After taking some shots, Reis got out of trouble and produced his own takedown, keeping Alcantara grounded until round’s end.

The pace dipped in the third, with Reis shaking off an early left hand to draw first blood in the round with a tenaciously acquired takedown. And though the crowd got restless, Reis kept scoring with ground strikes until Alcantara was able to get off his back and stand. A takedown from Alcantara ended the fight well for “Marajo,” who got back in the win column after a loss to Urijah Faber in his previous bout.

Sao Paulo featherweight Felipe Arantes fought off a third round low blow to win a close, but unanimous three round decision over Maximo Blanco.

Blanco gave Arantes plenty of different looks early on, throwing combinations to the head and 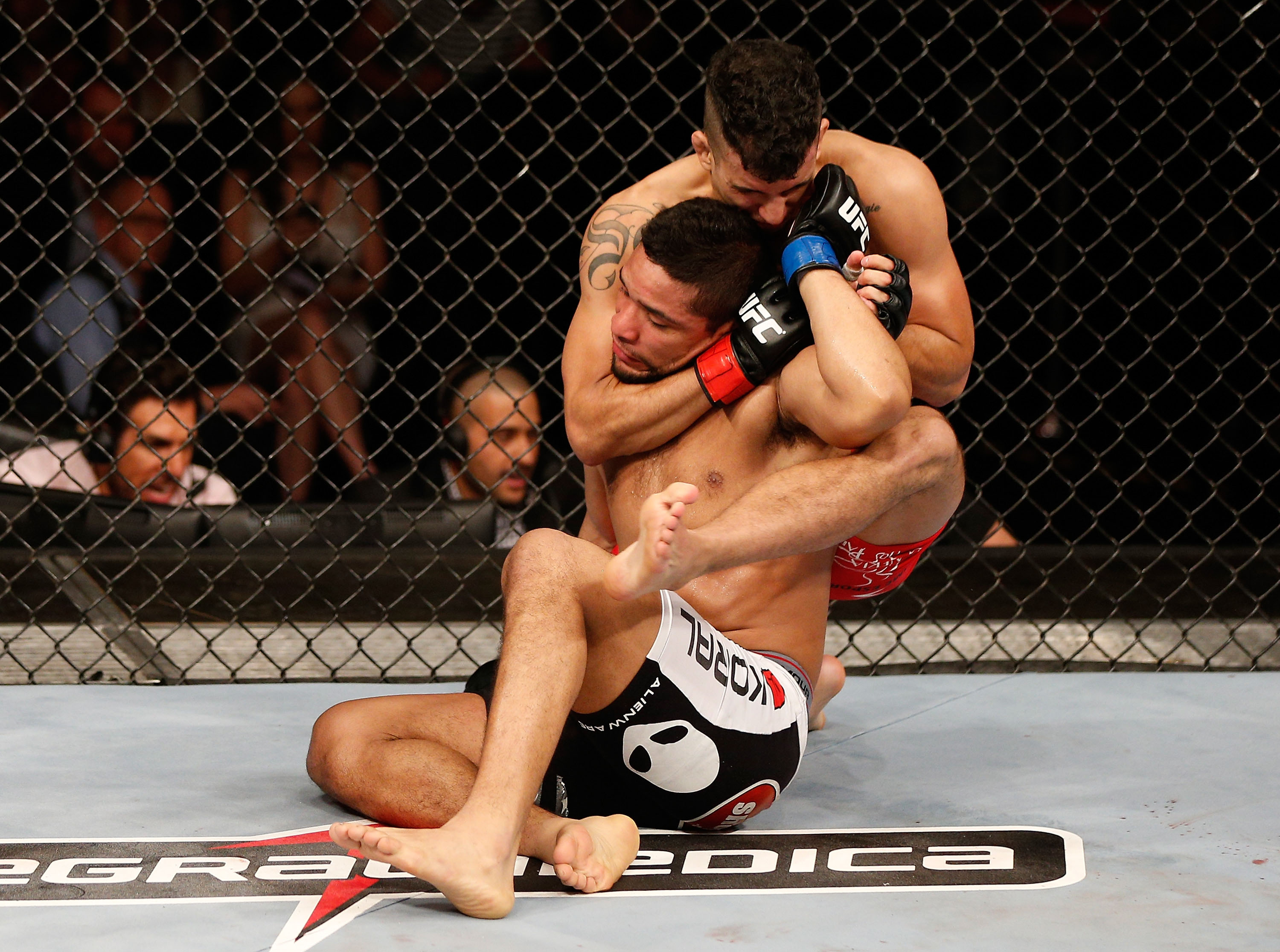 body before getting the takedown. Blanco abandoned the ground game quickly, and Arantes went on the attack once freed to stand again. As the bout entered its fourth minute, Blanco looked to be on the verge of a finish as he ripped off punches to the body, but as the Venezuelan took a brief break, Arantes pounced with a punch and kick assault that got the crowd roaring. Seconds later, a right hand dropped Blanco to the mat, but a subsequent submission attempt came up empty just before round’s end.

The fast-paced action continued in the early stages of the second, with Arantes looking for a triangle choke in the second minute that Blanco slammed his way out of, and the Venezuelan still intent on digging to the body whenever he was able. With 1:20 left, Blanco got a takedown, but he was unable to do anything with it, prompting referee Mario Yamasaki to re-start the action with seconds to go.

A hard low kick sent Arantes to the deck in the opening minute of the third round, prompting a halt to the action while the Brazilian recovered. Yamasaki also deducted a point from Blanco for the foul, forcing Blanco to push the pace in order to get a finish. With a little over three minutes to go, the bout strayed to the mat, and Arantes nearly locked up his opponent’s arm. Blanco escaped and the two stood, with Arantes taking Blanco down seconds later. The two rose at the three minute mark, but Blanco was unable to turn things around, leaving him with his third loss in four UFC outings.

UFC Hall of Famer Mark Coleman would be beaming with pride at the ground and pound attacks from both men in the first round, with the bloodied Tumenov looking like he took the worst of it, but in reality, his elbows and punches did the majority of the serious damage. Alcantara’s two takedowns may have aided his cause on the scorecards though.

Alcantara broke into the lead in the second round, controlling matters on the feet and the ground, but it was Tumenov (12-2) pushing the pace standing for most of the third round. In the closing minute, it was the home country favorite doing more work, securing the victory for himself in the process. 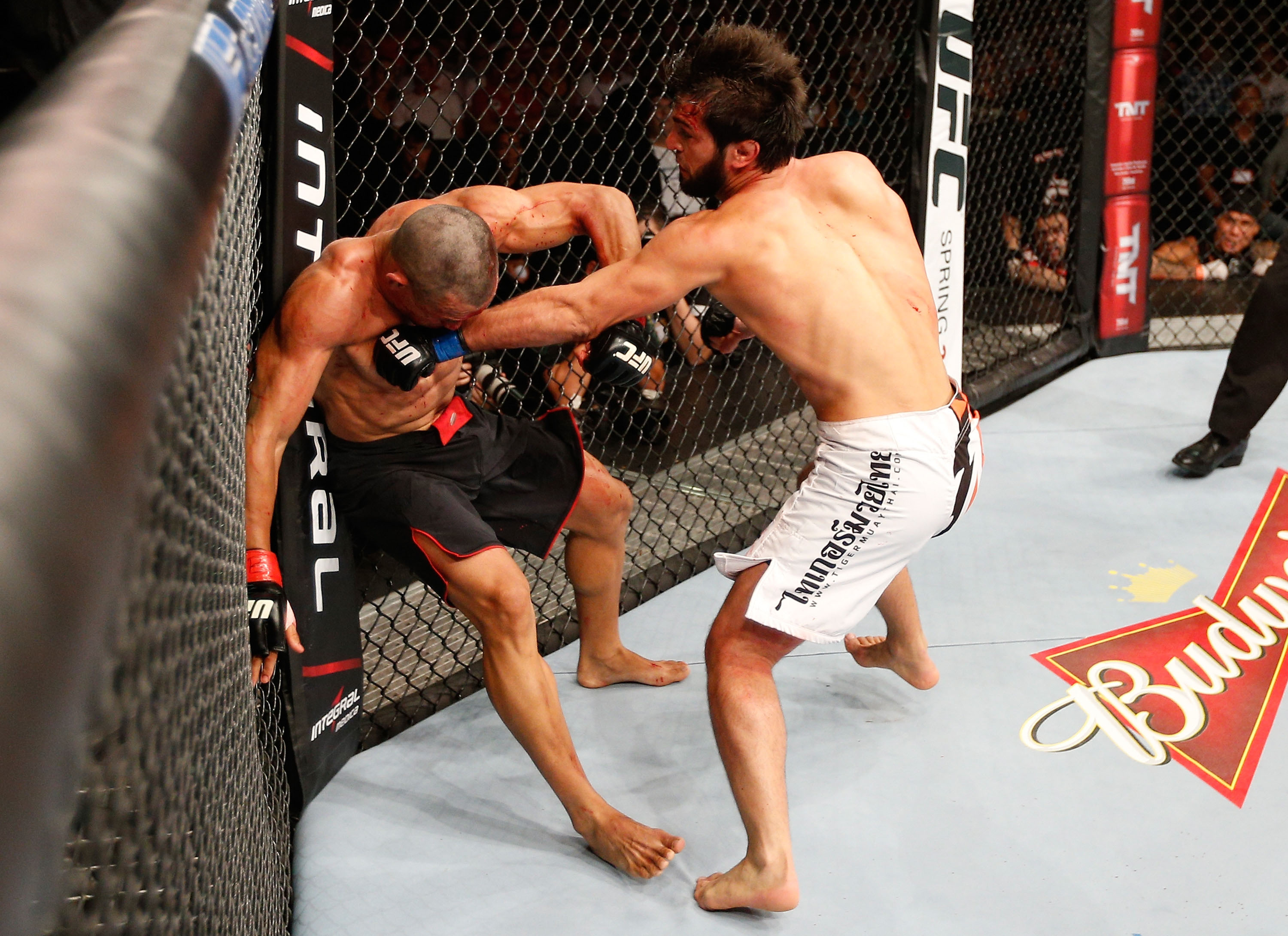 Tukhugov had as good a round as you can have without getting a finish in the first, scoring two takedowns, opening up a nasty cut on Silva de Andrade’s forehead, and dominating the standup portion of the frame as well.

Silva de Andrade hung in there in the second, though he still looked very stiff in his attack, allowing the much more relaxed Tukhugov to control the pace and location of the bout. The Brazilian landed some of his best shots of the fight though, a good sign for him heading into the final stanza.

There was solid action in spurts in the final round, with Silva de Andrade getting the better of his foe on several occasions. But it wasn’t enough for the judges, who rendered the verdict in favor of the Grozny native.