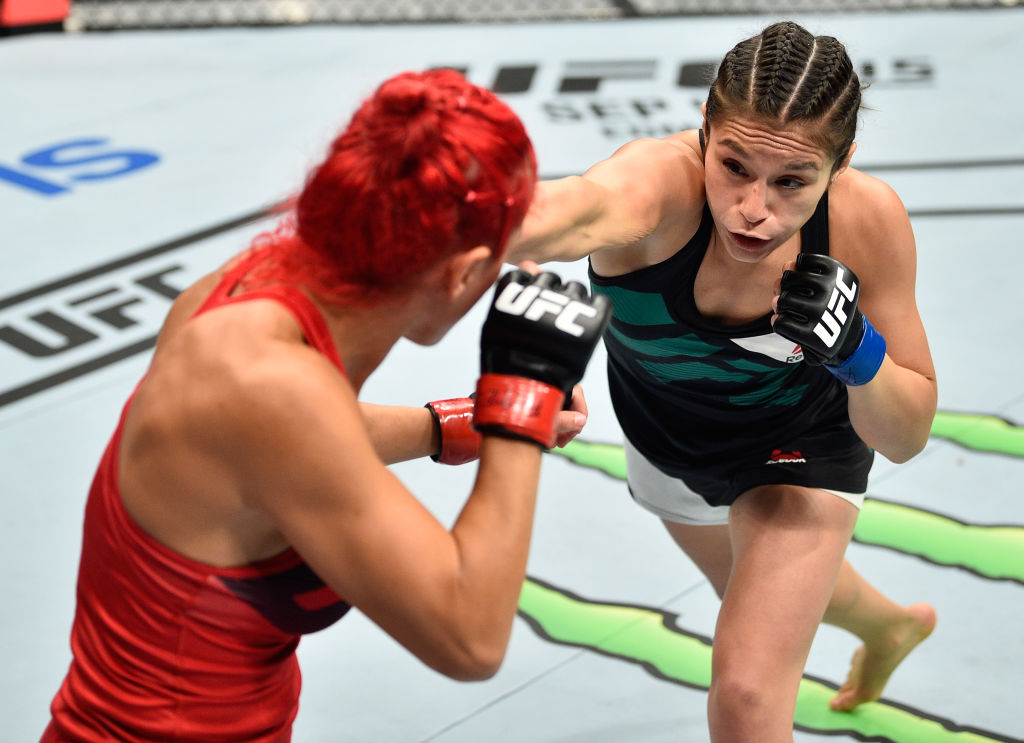 Disregarding the high altitude, Grasso and Markos got after it in the first round, both competing at an exhausting pace. In the first half of the frame, Markos got out to an early lead, but in the second half, Grasso roared back, not just with her striking, but with some effective ground work.

The pace didn’t let up in the second, with some early striking exchanges followed by a Markos takedown attempt that saw Grasso land on top. Markos scrambled out of trouble and the two continued to grapple against the fence until breaking with a little over three minutes left. Markos went on to catch a kick and put Grasso on the deck moments later, and the Canadian went to work, landing some hard strikes before Grasso got back to her feet. With less than two minutes left, the two went back to the mat and battled it out, Markos landing several hard elbows.

Markos got another takedown with three minutes left in the final round, but a minute later, Grasso was back up and trying to make a final impact on the scorecards, and thanks to a couple hard right hands, she did just that, taking the nod by scores of 29-28 twice and 28-29.

With the win, Guadalajara’s Grasso, who came in at 119 pounds for the bout, improves to 10-1. Ontario’s Markos, the No. 9-ranked strawweight contender, falls to 7-6.

Niko Price delivers the fade to Alan Jouban in the first round! What a punch! #UFCMexico https://t.co/MpLMGruG8x
— FOX Sports: UFC (@UFCONFOX) August 6, 2017

What was shaping up to be a possible Fight of the Night scrap was ended quickly by unbeaten welterweight prospect Niko Price, who halted veteran Alan Jouban in the first round.

Both fighters were throwing hard shots from the start, with one of Jouban’s punches raising a welt on the side of Price’s face. But in the second minute, Price dropped Jouban with a right hand, and after a follow-up barrage of shots, referee Gary Copeland intervened, stopping the fight at the 1:44 mark. 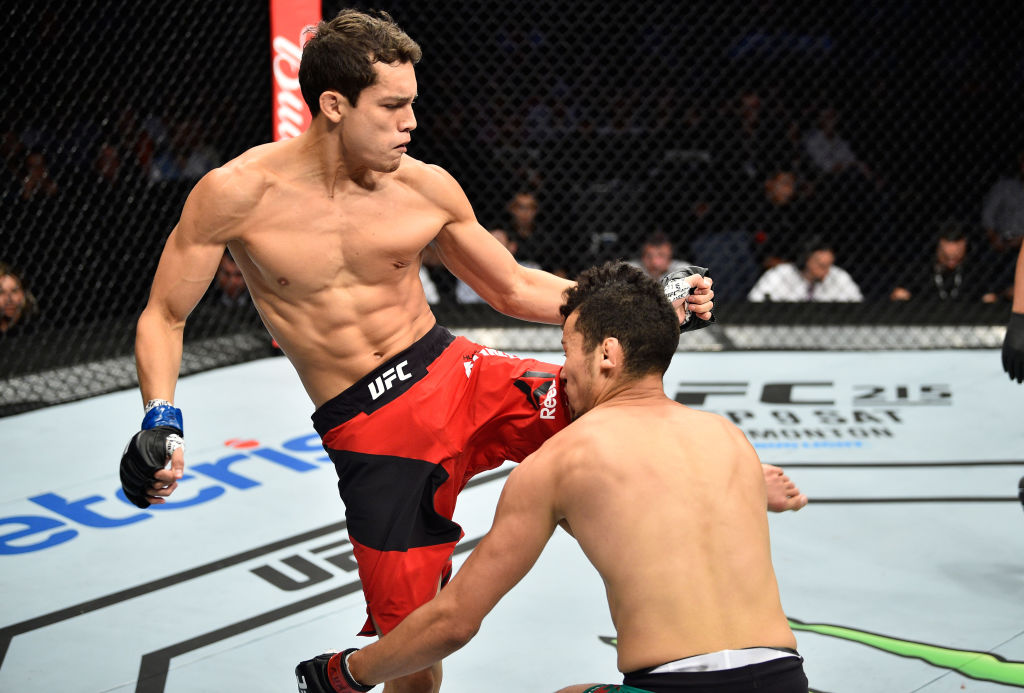 Bandenay showed no signs of the first-time Octagon jitters in this one, but then again, he didn’t have much time to get them, as he softened Bravo up with a kick to the body, then went upstairs, catching his foe with a left knee that put his foe down and out. The official time of referee Jerin Valel’s stoppage was 26 seconds of the first frame.

After a brief feeling out process, the 37-year-old Evans (24-7-1) looked for a takedown, but Alvey’s defense was solid. Evans kept pressing though, and he was able to get Alvey to the deck briefly with two minutes left. Once standing, the two remained locked up until 90 seconds remained, but there was little significant scoring for the rest of the frame.

Alvey (31-9, 1 NC) got more aggressive in the second stanza, but despite walking his foe down, he wasn’t letting his hands go. Evans landed a couple kicks and scored a quick takedown, but not much outside of that, and the fans let both fighters hear it.

Despite a hard right hand by Evans that briefly got Alvey’s attention, the busier and more effective fighter in the third was “Smile’N Sam.” And though his output wasn’t getting the crowd back into it, it was enough to get the win by scores of 29-28 twice and 28-29.

TUF Latin America winner Alejandro Perez picked up his fourth UFC win in the main card opener, as he gutted out a three-round split decision victory over Andre Soukhamthath.

Perez was busy with leg kicks in the opening round, but two left hands from Soukhamthath resulted in two flash knockdowns that likely won him the round.

In the second, Perez began landing more telling blows, only to hit the deck a third time courtesy of Soukhamthath’s left hand in the second minute. But with under two minutes left, Perez got his own knockdown thanks to an overhand right. After a brief spell on the mat, the two rose, with Perez scoring a back elbow that got the crowd roaring.

In the third, Perez broke open a close fight with a takedown, and that final round edge proved to be enough for him to earn the hard-fought decision.