Pressure's on for TUF Live's Lawrence 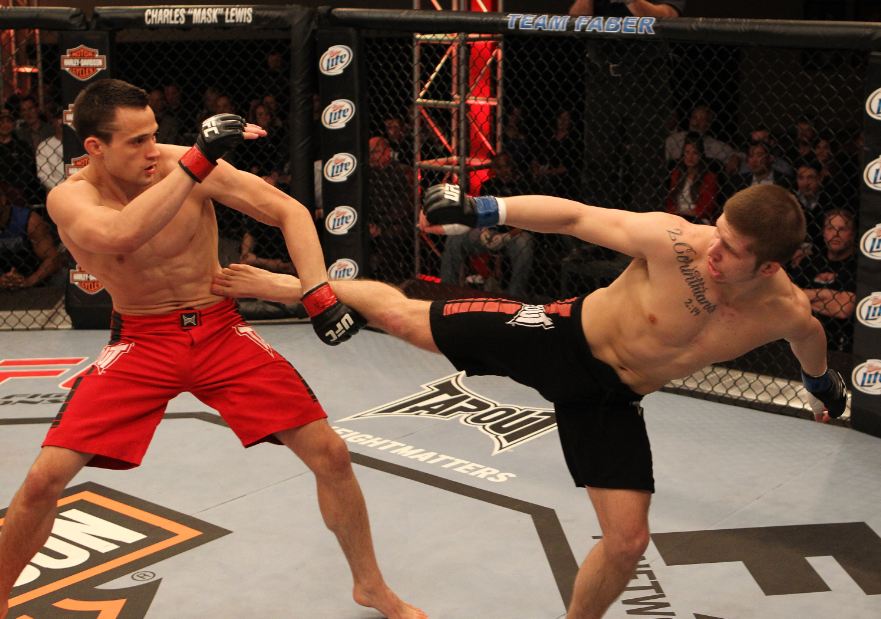 Perhaps the best aspect of The Ultimate Fighter’s new live format is its immediacy. No longer do you wait months after the fact to hear about who did what in the house or speculate about the favorites to win the competition when you know that the die has already been cast during taping.

So when Missouri’s Justin Lawrence stopped WEC vet James Krause during the TUF Live season premiere, the reaction was live and uncensored. The general consensus? The 21-year old was suddenly the favorite to win the whole competition. Not bad considering that 15 other fighters won on that same night in Las Vegas and that entering the house, Lawrence only had three pro fights (all wins).

But there’s something about a fighter with a little flash in his striking game that gets everyone’s attention, and it wasn’t just the viewers that marked “The American Kid” as a fighter to watch, as UFC bantamweight champion and TUF coach Dominick Cruz made Lawrence his first pick.

“Being chosen first, in a way, kind of made me feel confident, but then again, I kind of felt a target being placed on my back,” said Lawrence. “It’s definitely more pressure. A lot of people expect a lot more from me now. All I can do is go in there and fight. I’ve been fighting since I was six-years old.”

So there is more to him than three pro bouts and an impressive showing against Krause. According to his TUF Live bio, he has over 150 amateur kickboxing bouts, and when you add in some high school wrestling, a couple St. Louis Golden Gloves titles and training partners like Anderson Silva and Lyoto Machida at the Black House gym, Lawrence suddenly looks even more dangerous, so much so that Cruz didn’t hesitate to throw him in the Octagon as soon as he got control of the fight picks, with his first fight of the tournament taking place this Friday night.

His opponent isn’t some wide-eyed, green prospect though. In fact, in Team Faber’s Cristiano Marcello, Lawrence will be facing a 14-year vet who has appeared in PRIDE, but more importantly, the Brazilian is the former jiu-jitsu coach of the legendary Chute Boxe Academy.

“I trained the best fighters in the world in the best time of their careers,” said Marcello, who gave Wanderlei Silva and the Rua brothers (Shogun and Ninja) their black belts. Winner of four of five bouts after a nearly three year layoff from 2007 to 2010, Marcello earned his way into the house with a submission of Jared Carlsten, and though he is 13 years older than his opponent, he isn’t about to let this chance of a lifetime pass him by.

“I’m 34 years old, and in this sport, each person starts now more younger than ever,” said the married father of two. “You have to take the opportunity. For me, it’s just one more fight. He’s a tough kid, everybody in the house is tough, and it’s gonna be a tough fight.”

And in this matchup, it’s the classic case of striker vs. grappler, with the winner possibly being decided by who can last the longest in the other’s world. Despite Lawrence’s armbar win in his last pre-TUF fight and his work with the Black House team, Marcello definitely holds the edge on the mat. It’s also key to point out that the Brazilian vet may be best remembered by diehard fight fans for a backstage altercation with Charles “Crazy Horse” Bennett at a PRIDE show in Japan, showing that he’s not afraid of a scrap, something he probably ran into a lot with the killers in the Chute Boxe gym. Having said that, Lawrence will take his chances standing with Marcello.

“I’m definitely training hard for my upcoming fight again Marcello,” he said. “It’s exciting, nerve-racking, and he’s a very good grappler, so I really want to try and stay on my feet and make him feel uncomfortable as much as possible. I don’t want this to turn this into a Jiu-Jitsu match ‘cause I know that’s his strength. Dom’s crew (Team Cruz) has been doing a phenomenal job in training and preparing me and I’m pumped. I just have to fight my fight.”

If he does, earning a ticket to the next round of the TUF Live competition in the process, just get ready for the world of social networking to explode once again.