Demetrious Johnson wasn’t always the pound-for-pound king of mixed martial arts, the UFC flyweight champion who has defended his title eight times and counting as he heads into title defense number nine this Saturday night.

He used to be just a hungry kid who had dreams of being the best and of changing his life forever. And in April 2010, he was as wide-eyed as any fighter when told that if he won Fight of the Night honors in his WEC debut against Brad Pickett, he would have an extra $65,000 in his pocket.

“Sixty-five G's sounds good to me,” he recalls with a laugh. “I was about to fight my ass off. I’m a poor ass kid from the ghetto. If I was on the street and there was a package of hot dogs and two crows fighting over it, I would get into a fight with those crows.”

Johnson didn’t win that bonus, or the fight with Pickett. But over the next six-plus years, he would only lose one of his next 16 fights, that coming to Dominick Cruz in his last fight in the bantamweight division. Five months later, he debuted in the UFC’s flyweight class and he is undefeated at 125 pounds and the most dominant champion in the promotion.

In other words, everything has changed since 2010 except his motivation. That remains the same.

“I’m a self-motivator,” Johnson said. “I’m not out there searching for motivation or what’s going to give me that fire underneath my ass to get out there and fight again. I just like working out, I love learning, I love competing and this is my job and what I do for my family. This is how I bring in the bread."

"I just like working out, I love learning, I love competing and this is my job and what I do for my family." -- Demetrious Johnson

It almost seems unfathomable that a fighter who does such complex things in the Octagon can whittle his motivation down to his desire to put food on the table for his wife and kids. But maybe that’s the secret. At 30, Johnson is who he is, and he’s not about to change for anyone.

So don’t expect trash talk wars, epic Instagram posting sprees or headline-grabbing statements. “Mighty Mouse” knows all of the above sells, but he’s not interested in that part of the pro sports game. And as he prepares for an opponent the world will not find out about until Wednesday night, when the final episode of The Ultimate Fighter 24 airs, he’s not going to look past whoever that might be and declare that this is one king not about to lose his crown.

Up next for Demetrious Johnson: Ultimate Fighter finale this Saturday night on FS1 | See it live in Las Vegas

“When people look back on my career, they can be like, ‘This guy had the most potential to capitalize and get the maximum dollar just by talking s**t,’” he said. “I can talk like that, but that’s not the way I look at it. This is a sport and anything can happen. I can be knocked out, I can get submitted. But I go in and I train my ass off in the gym and I look at it as just another fight. I have five rounds, 25 minutes to go out there and fight and then we’ll see what happens.”

Up until those 25 minutes, and the seconds after it, he prefers to be Demetrious Johnson. He talks about a recent trip to the gym when someone said, “Have a good day, champ.” Johnson appreciated the gesture but, at the same time, he’s just fine with being Demetrious. 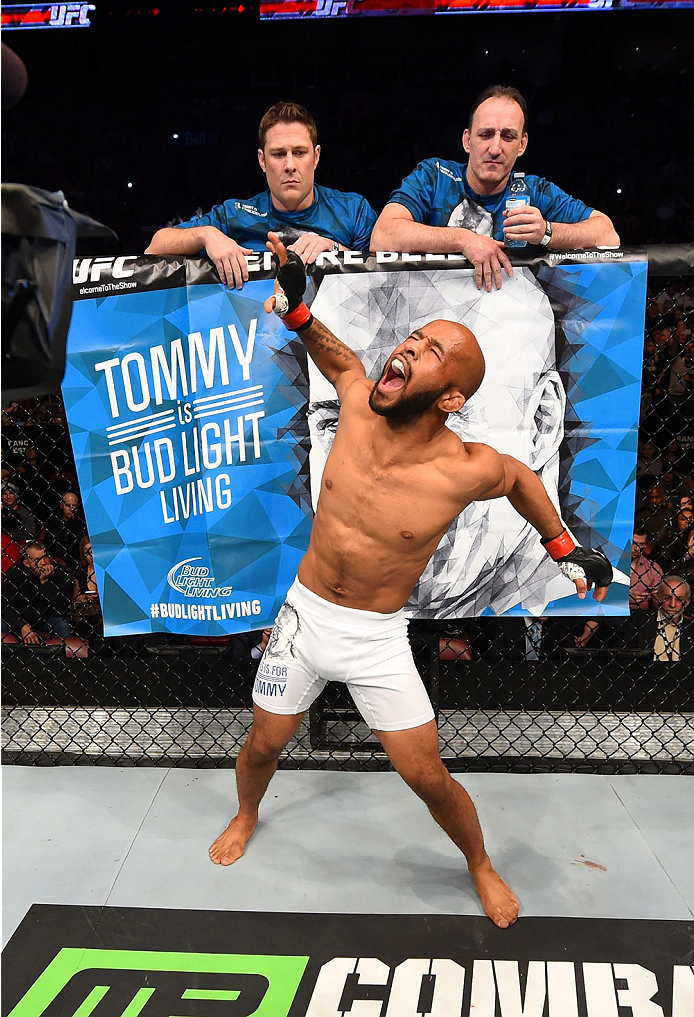 That attitude may be why some think he will be champ for as long as he wants to be. The Kentucky native, who has long made his home in Parkland, Washington, refuses to get caught up in the trappings of the fight game. Ask him if he was a religious viewer of the series that was going to determine his next challenger, and he says he probably spent more time on the video gaming hobby that has made him one of the most popular account holders on the Twitch streaming service. And while it seems to be a complete 180 from his day job, in reality, it’s put Johnson closer with his fan base as he still stays focused on life outside of fighting.

“When I started doing Twitch, I looked at it as a different avenue to interact with my fans outside of mixed martial arts,” he said. “I’m interacting with them on another level about one of the things I’m very, very passionate about, and that I was passionate about before I got into fighting, which is video games. It’s almost like people can see my personality, and it’s a good thing because you see a lot of these fighters who obsess about fighting.”

Johnson’s not that guy. That may make some wonder how dominant he could be if he was obsessive about his fighting career. Answer: he might not be as dominant. In fact, he might just be average. Johnson got to this point doing things his way and it’s worked to perfection. Is that the formula for greatness for every fighter? No, but it is for “Mighty Mouse,” who prefers his obsessions to lean toward video gaming.

“I’m a night owl,” he laughs. “I don’t like to go to bed at nine, so I start playing. I could sit there and watch fights all day and get mesmerized. Nah, I’d rather go kill a dragon and get some new gear. That’s just my choice.”