Roxanne Modafferi Has Locked In On Brazilian Jiu Jitsu, And She’ll Take On Michele Oliveira In A Grappling Match At The UFC Fight Pass Invitational
By Noah Gagnon • Jun. 27, 2022

MMA fans around the world rejoiced when it was announced that Roxanne Modafferi would be returning to competition in the form of a grappling match against Michele Oliveira at the UFC Fight Pass Invitational this Sunday. Many thought they’d seen the last of “The Happy Warrior” after she retired this February, but for Modafferi, martial arts is a never-ending journey.

Following an extensive 46-fight MMA career, it’s safe to say that Roxanne has been enjoying time away from the cage, but the lifelong martial artist will never stray too far from the training room.

“I have been focusing on only doing jiu jitsu. I spent about three months on gi, and now I’m getting back into no-gi because I have this match coming up,” Modafferi said. “I’ve also been teaching martial arts and doing a lot of writing.” 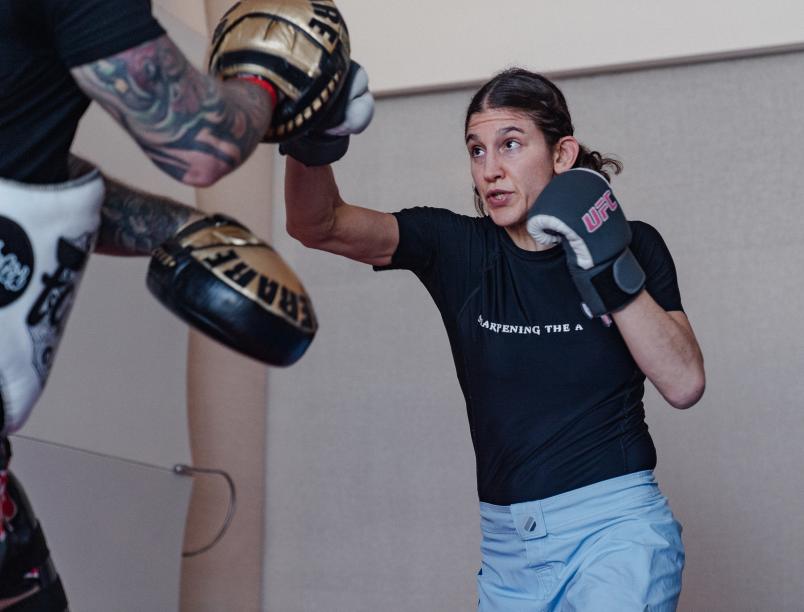 Roxanne Modafferi works out ahead of her bout at Fight Island 8 on January 15, 2021. (Photo by Zac Pacleb/Zuffa LLC)

Now more enthralled by jiu jitsu and looking back at her career, Modafferi wonders if spending so much time in the gym focusing on her weakness was the correct approach.

“Part of me wonders if I should have just been doing more jiu jitsu, and just become a monster on the ground instead of spending all my time on striking,” Modafferi said. “Now I’m trying to change it up and just enjoy jiu jitsu.”

Turning towards the future, Modafferi relishes the opportunity to display some of her true jiu jitsu skills in a grappling setting, without having to worry about some of the drawbacks of an MMA ruleset. Her upcoming match allows her to showcase aspects of her game that rarely saw the light of day inside the Octagon, but most certainly will on the mats at the UFC APEX.

“I like playing closed guard and spider guard. But I couldn’t really do that in MMA because you’d get hit and then it would look bad, so I kind of changed to a top fighter,” Modafferi said. “I tend to find myself on the bottom a lot, so I’m trying to re-evolve to be good at that again.”

Despite being given a tough draw with Brazil’s Oliveira, who’s an experienced Brazilian Jiu Jitsu black belt, Modafferi’s notoriously jovial spirit and positive attitude has not wavered.

And for fans who are hoping that some experience in grappling competition might give Roxanne the urge to jump back into the Octagon, think again. It’s still a hard pass.

“I’m done. I don’t want to get hit in the head anymore,” Modafferi said.