Positive Vibes Only For Frank Camacho

Frank Camacho has made the most his time spent in quarantine. Now he's ready to get back in the Octagon
By Thomas Gerbasi, on Twitter: @TGerbasi • Jun. 17, 2020

No one wanted the COVID-19 pandemic to strike the world like it did over the last several months. But one look at the Instagram page of Frank Camacho and it’s clear that if anyone made the best of a bad situation, it’s “Frank the Crank.”

“We're just so lucky to be in Guam,” said Camacho, who spent plenty of quality time with his wife and two kids while quarantined in one of the most beautiful spots on the planet. “If there's nothing else to do, this is what we would be doing anyway, so we were spending time together and getting on the ocean and doing all this stuff.”

Not surprising from one of the most affable and positive folks you will ever meet, but all good things must come to an end, so the days on the beach ended when he got the call a few weeks back that he had a fight this weekend in Las Vegas with Matt Frevola. Thirty hours later, he was in California and right back into wrestling practice.

“It was pretty bad,” he laughed when talking about his first day back in training camp with Team Oyama. But what did take the edge off was that he never stopped training at home during lockdown, so being fight ready was one thing he didn’t have to worry about when he arrived.

“It's one big checkmark off the bat,” Camacho said. “It really helps to stay in fight shape all year round without getting banged up too much. So we're already in shape, we can do it. Now at '55, we're just fighting the scale now, tightening up the game plan and we'll be good to go, so that's why it was a no brainer to take the fight in four weeks. And the matchup, too. Let's just say (UFC matchmakers) Sean Shelby and Mick Maynard know what they're doing with this fight.”

Given the styles of Camacho and Frevola, this is a prime candidate for Fight of the Night honors this weekend. On paper. In reality, once punches start landing, it can be either all-in or all-out. The 31-year-old Camacho is well aware that what he thinks will be a brawl could turn into a grappling match. So he’s prepared accordingly.

“Part of the reason why I needed to get out here ASAP was because we needed to address that,” he said. “Anything can happen in a fight and the plan was to keep my guard up. Watching his fights and his tendencies, he has a big gas tank and when he goes for shots, he commits all the way. So we were just dialing in the game plan with Oyama and we have a handful of training partners here that we can work with who have his type of style.”

It’s a subtle alteration to the usual M.O. of Camacho, which is often to go in guns blazing and keep them firing until someone’s night is over. That’s been a blessing and a curse for him, especially when he’s had success when he takes it down a notch to pick his shots. So who knows whether it was a good thing to suggest for him to watch the epic first fight between Diego Corrales and Jose Luis Castillo from 2005.

Yes, it was a brawl, but it was also technically beautiful and fought at the highest level of boxing. Camacho loved it. 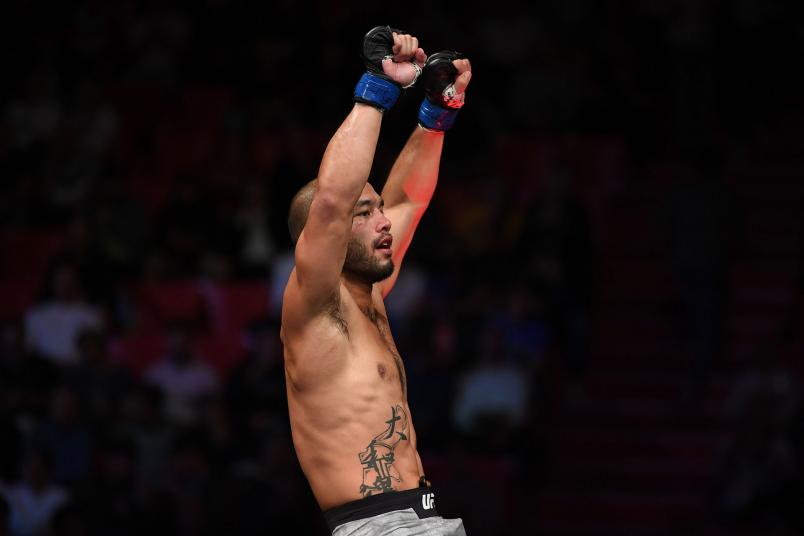 “That fight hyped me up,” he said. “I immediately got out on the bag and was hitting it for a good minute. (Laughs) My wife's a fight fan, not as big of a fight fan as I am, but I was like, 'Babe, look at this, look at this.' What was crazy was how high-level it was, but for me, seeing the heart and the will of both of them, they were at a peak in their career. It was like an emotional rollercoaster. It was wild. When they would sit down in the corners, I was listening to what the corners were saying but I needed to rest at the same time. (Laughs) It was crazy.”

Camacho knows all about that crazy, having engaged in some instant classics of his own, a lot of them taking place as the crowd roared and energized him. That won’t be the case this weekend, as he fights in the UFC Apex with no fans in attendance. Will that change him?

“We're gonna have to see, right?” he said. “I think I feed into the crowd. But it's an X factor, something you can't really measure unless it's there or it's not there. So the fact that I can hear my corner and it's a closed to the public event, I'm very excited. Maybe I'll fight better.”

He laughs, but he’s serious in his excitement for this new challenge.

“You hear the crowd and you're like, all right, let's go, let me try to finish this guy. But now I can hear Colin (Oyama) and Alex (Perez) in the corner saying, 'Hey, let's work on the jab' or 'Let's move our feet,' or 'Move your head for God's sake.' (Laughs) It's a different time, different conditions but that's part of martial arts, having to adapt. You can't fight in the same environment all the time.”