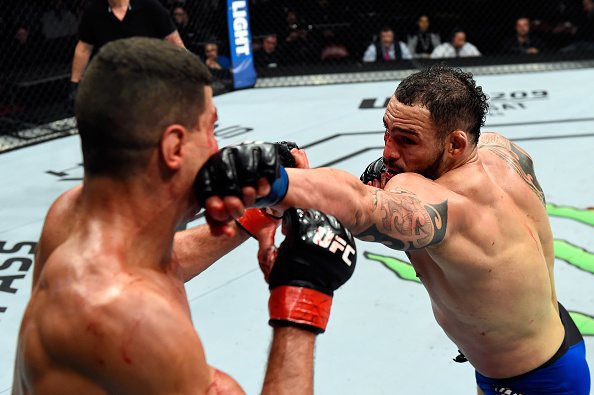 Santiago Ponzinibbio of Argentina punches Nordine Taleb of France in their welterweight fight during the UFC Fight Night event inside the Scotiabank Centre on February 19, 2017 in Halifax, Nova Scotia, Canada. (Photo by Josh Hedges/Zuffa LLC/Zuffa LLC via Getty Images)" align="center" />
PONZINIBBIO vs. TALEB

Argentina’s Santiago Ponzinibbio made it four in a row in UFC Fight Night action Sunday, as he won a close, but unanimous, decision over Montreal’s Nordine Taleb in a welterweight bout at Scotiabank Centre in Halifax.

The welterweights started out tactically, with Taleb (12-4) eventually getting his range with several hard kicks to the leg, but Ponzinibbio made a late run, heating matters up in rapid-fire fashion.

In the second, Ponzinibbio (24-3) pressed his late first round advantage, bloodying the nose of Taleb and then dropping him with a sharp left-right with two minutes left. Nothing of significance happened from there, but it was the Argentinean controlling the bout from the top position.

Blood was flowing from both fighters in a grueling third round, with both fighters continuing to press each other as they battled from one end of the Octagon to the other. It was Ponzinibbio’s punches that made the difference though, with the judges rendering three identical scores of 29-28 in favor of “Gente Boa.”

Rivals on The Ultimate Fighter 20, Randa Markos and Carla Esparza met up in the Octagon Sunday night, Markos taking a close split decision over the former UFC strawweight champion.

After a slow start to the bout, Esparza began scoring with right hands, and with 90 seconds to go, she got her first takedown. Markos stayed busy from the bottom and was able to get out of danger with several hard punches before the horn sounded.

There were several good exchanges in the second round, but it was Esparza’s ground game that made the difference late, as a takedown was followed by an arm triangle attempt. Markos was able to stay in the fight, though, and she ended the round with a series of punches while inside the choke attempt.

Markos’ striking continued to impress in the final round, while Esparza scored another takedown. In an ensuing scramble, Esparza landed an illegal knee, but referee Keith Peterson didn’t call it. Ultimately, it didn’t matter, as Markos did enough to pick up the victory by scores of 29-28 twice and 28-29.

Highly-touted bantamweight newcomer Aiemann Zahabi didn’t get his seventh consecutive finish against Reginaldo Vieira, but he did make it seven straight wins, as he defeated the former TUF Brazil winner via unanimous decision.

Zahabi (7-0) was calm in the first round of his UFC career, and he avoided most of the wild haymakers from Vieira while rocking the Brazilian briefly with a left hand. But in the final two minutes of the frame, Vieira surged, scoring two takedowns in between landing more strikes while standing.

The hard shots kept coming from Sao Paulo’s Vieira (14-5( early in round two, and even though Zahabi wasn’t getting flustered, his foe was scoring points. Late in the round though, the Montrealer made his move, hurting and knocking Vieira down with a right hand, but the horn intervened before Zahabi could press his advantage.

A fight broke out in the final round, with both men digging deep to make an impression on the judges, and the one who ultimately did that was Zahabi, who remained unbeaten by scores of 30-27 and 29-28 twice. 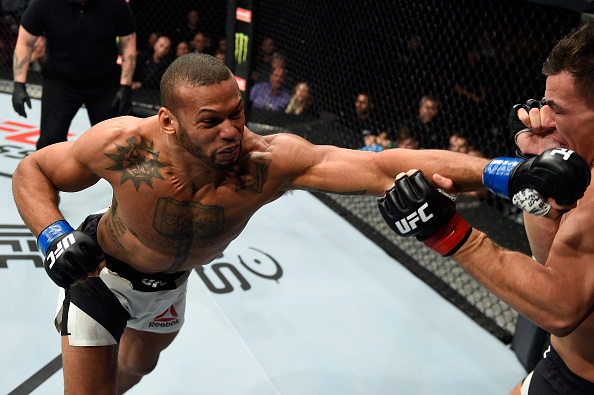 Brazilian middleweight Thiago “Marreta” Santos snapped a two-fight losing streak and added another clip to his highlight reel with a second-round TKO of Wales’ Jack Marshman.

When it came to action, neither fighter disappointed in the opening round, with Santos landing several hard shots while standing in addition to scoring a takedown. But with 45 seconds left in the frame, a laser-like right hand dropped Santos to the deck. Marshman wasn’t able to finish, but with one shot, he was back in the fight.

The Welshman came out aggressively for the second stanza and did tag Santos with another right hand, but as the round approached its midway point, a spinning heel kick from the Brazilian caught Marshman flush and put him on the mat. Marshman looked like he was recovering as he hit the deck, but a couple follow-up shots prompted referee Brad Jardine to halt the contest at the 2:21 mark.

Rio de Janeiro’s Santos improves to 14-5 with the victory; Marshman falls to 21-6.

Middleweight veteran Gerald Meerschaert continued to impress in the opener, as he picked up his second UFC win by submission, forcing Ryan Janes’ to tap in 94 seconds.

Janes got off to a fast start, aggressively pursuing the takedown and getting it. Yet just when it looked like Janes was going to begin pulling away, Meerschaert smoothly and quickly locked in an armbar and it was game over, as the Canadian tapped out at 1:34 of the opening round.

With the win, Milwaukee’s Meerschaert improves to 26-8; Victoria’s Janes falls to 9-2.