Ponzinibbio Happy to Debut in His Second Home 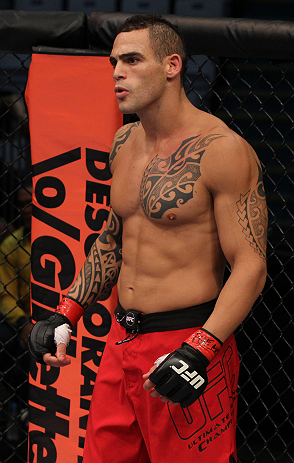 When Argentina native Santiago Ponzinibbio steps into the Octagon for the first time Saturday night to face New Yorker Ryan LaFlare, it won’t be just as one foreigner fighting another in Goiania, Brazil. It will be as an adopted son making his debut at home.

“I've been living here for five years,” said the La Plata native who now makes his home in Rio de Janeiro. “I suffered a little bias in the beginning because of the rivalry between Brazil and Argentina, but today I feel pretty good. I was welcomed in an incredible way, I got some fans and I am very satisfied. I am sure that on November 9th I will be fighting at home and it will be my pleasure.”

It’s been a wild ride to get to this point for “Gente Boa” (which means nice guy). A kickboxer in Argentina, Ponzinibbio was already a young man out of place, sporting wise, in a country where football (soccer) and boxing are king.

“Boxing is a very strong sport over there, but I just trained it a little,” he said through translator Michele Spinelli Davis. “Incredibly enough, I trained much more boxing over here in Brazil.”

That left Ponzinibbio on the outside looking in when the boxing boom of recent years - spearheaded by the likes of Sergio Martinez, Marcos Maidana, and Lucas Matthysse – took over the country.  Ponzinibbio was about to get involved in a boom of his own, but he still takes pride in the accomplishments of the aforementioned pugilists.

“They are top boxers on the worldwide level and I am a fan of all of them,” he said. “They have the guts of the Argentines. I admire them all as sportsmen.”

Boxing wasn’t going to be his path to prominence though, as the suggestion that he start studying jiu-jitsu led him to Brazil. There, he eventually migrated to MMA, made his debut in 2008, and 19 fights later, he was the only non-Brazilian on the cast of The Ultimate Fighter Brazil 2. But if that affected him, it didn’t show, as he defeated Thiago Silva, Marcio Santos, Cleiton Duarte, and Leonardo Santos to earn a spot in the series final.

That was the good news. The bad news was that he broke his hand in the Santos fight, an injury a lot more severe than he thought it was initially, and was unable to compete against fellow finalist William Macario in June.

“My injury was very serious, much more than I could imagine,” he said. “When I left the TUF house, I was so sure that I would be able to compete in the final TUF that five days after my surgery I was already training my legs and doing some boxing with one hand. I also continued doing the diet. I had no notion of the seriousness of my injury.”

It was so bad that he only got cleared by the commission two months ago, leaving him as a spectator as the man he beat in the semifinals, Santos, stepped in and won the TUF crown by beating Macario.

“I really wanted to be there,” he said. “I had earned that right. Unfortunately, I had to be out due to an injury, but my dream came true when I was hired by the UFC.”

Given his performance on TUF, his impressive skill set and 19-1 record, not to mention the circumstances that took him out of the TUF final, there was really no question that he was going to get a shot in the Octagon. But now the question is, will he get a shot at either the man who won the show – Santos – or the man he was supposed to fight in June – Macario? Or does he even care at this point?

The fight that Ponzinibbio does have set in stone is Saturday’s match with LaFlare, an unbeaten prospect with one UFC win already under his belt.

“He is a wrestler, he has great physical conditioning and works very well on grappling,” he said of LaFlare. “But I did a hard camp training, and for me, he will be a guy with two arms and two legs. I will be ready for the war.”

It’s been a long time coming for Ponzinibbio, so you get the impression he’s not just talking.

“I am a very intense fighter who looks for the fight and doesn't give at anytime,” he said. “I had an amazing camp training over here at Team Nogueira and it will be a big show, I am very confident of that.”

Sounds like something the Brazilian fans can get behind.