Karolina Kowalkiewicz earned her title shot after taking out top contender Rose Namajunas at UFC 201 and she didn’t waste any time calling out the champion.

“I want to fight with (Joanna Jedrzejczyk) very much in New York,” Kowalkiewicz said in a backstage interview with Megan Olivi. “This is my big dream. She said that I’m not on her level but I am ready for her. I hope she’s ready for me. Just imagine: Polish power versus Polish power. This will be something amazing.”

Kowalkiewicz’s dream has become reality. UFC announced that she will challenge Jedrzejczyk for the strawweight title on the biggest stage of them all in New York City at Madison Square Garden at UFC 205.

But for “Joanna Champion’s” opponents, championship dreams can quickly turn into nightmares.

Jedrzejczyk is one of the most decorated, durable and entertaining champions in the UFC today. Outside of the Octagon she is kind and humble, but once she gets an opponent she morphs into a fighting machine with one simple mission: retain her title at any cost.

A master of mental warfare, Jedrzejczyk starts to attack her opponent well before fight night. Her confidence and flair for trash talk and in-person theatrics during staredowns make her the perfect champion/superstar to be a part of the UFC’s maiden voyage into New York.

“It’s a big deal for UFC and for all of us,” Jedrzejczyk said at a Q & A session in July. “It’s going to be the first show in New York and it’s the perfect place for martial arts. Big boxing fights have happened there and it’s time for UFC to be there, too. There is a big Polish community in New York.” 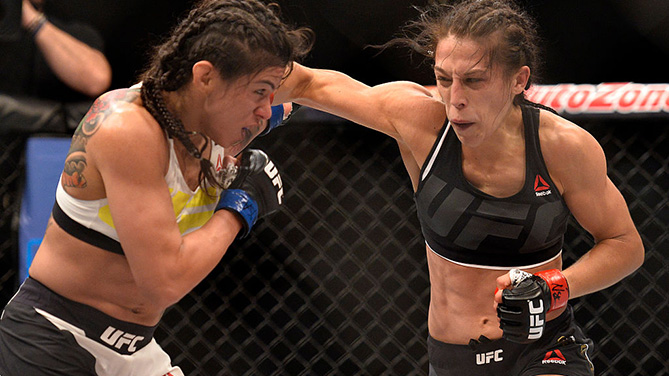 Poland’s Kowalkiewicz is the perfect opponent. She brings an undefeated record (10-0) and a stand up game that should allow her to go punch-for-punch and kick-for-kick with Jedrzejczyk. Kowalkiewicz will likely be a sizeable underdog against Jedrzejczyk, but there have been several huge upsets in the past year.

Holly Holm took out the seemingly unbeatable Ronda Rousey as a 9-1 underdog in Australia at UFC 193. And like Holm, who was hailed as a potential foil to Rousey upon her arrival, Kowalkiewicz has seemed to be on a collision course with Jedrzejczyk ever since she signed with the UFC. Fans want to know who the baddest female fighter is from Poland and at UFC 205 they’ll finally get their answer.

But for Jedrzejczyk, the fight against Kowalkiewicz is just a step in a grander plan. She wants to be a two-division world champion and is advocating for the UFC to start a women’s flyweight division.

“I think we need more female divisions in the UFC and I wish we’re going to have it soon,” she said. “For example, 125 is the perfect division for some of the girls that can drop down from 135 to 125, and from 115 we can go up. The thing I want to do is – I like to do crazy things. I want to hold two belts at one time and this is what I want to do.”

First, the champion must get through Kowalkiewicz, who has said Jedrzejczyk -- dismissive at times about Kowalkiewicz as a challenger -- is scared to fight her. Kowalkiewicz is confident, saying she knows that she can beat her compatriot.

Don’t miss UFC 205 on Nov. 12 to find out which Polish star will raise the belt in New York City.