Polish stars happy to grow the sport together 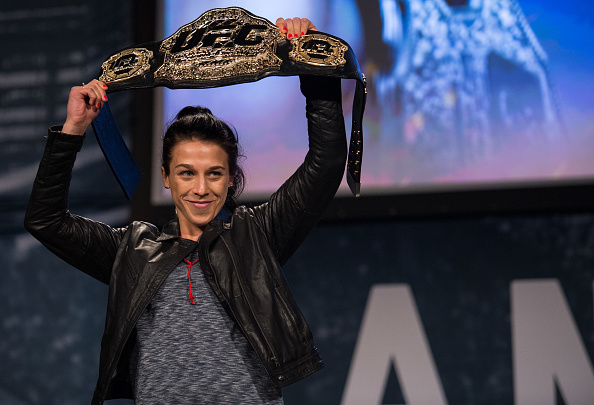 NEW YORK
UFC strawweight champion Joanna Jedrzejczyk and challenger Karolina Kowalkiewicz didn’t need to be separated as they prepared to head to Tuesday’s UFC 205 press conference at the Theater at Madison Square Garden. They’ll have their 25 minutes or less to fight on November 12. So, for now, it’s all calm between the two Polish stars.

“I know her, I like her and I respect her very much,” Kowalkiewicz said. “She's a great fighter, and we are both from Poland.”

“We are both Polish, we're fighting on probably the biggest UFC show in 2016, so we are friends,” Jedrzejczyk added. “When I step into the Octagon, I'm not going to be friendly anymore, but now, why not? This sport is beautiful, we've contacted each other and we can have fun with our opponents, but when it's time to fight, we fight. But I'm happy that two Polish girls will fight in Madison Square Garden in the first show in New York (City). I'm happy for both of us and for the Polish community, which is very big in New York.”
TICKETS ARE STILL AVAILABLE FOR UFC 205 - THE DEBUT IN NEW YORK AT MADISON SQUARE GARDEN

As important as this fight is for the MMA world at large, it’s even more so in Poland, where Olsztyn’s Jedrzejczyk and Lodz’ Kowalkiewicz were born, raised and trained in the sport of mixed martial arts. They even fought once as amateurs, with Jedrzejczyk submitting Kowalkiewicz in March of 2012. But that was more than four years ago.

“I am a different fighter, so it means nothing,” Kowalkiewicz said.

Since that first meeting, the two have combined for 22 pro MMA wins, Kowalkiewicz earning three Octagon victories over Randa Markos, Heather Jo Clark and Rose Namajunas, while Jedrzejczyk has become a legit superstar in the UFC thanks to six victories that includes a title-winning effort over Carla Esparza and successful title defenses against Jessica Penne, Valerie Letourneau and Claudia Gadelha.

All this success has led to speculation about how a fight between the two in 2016 would look, and now it’s going to happen, much to the delight of Polish fans.
RELATED STORIES: McGregor brings the show to New York City | Polish stars Jedrzejczyk, Kowalkiewicz perfect fit for NYC | Woodley booed at NY presser; Wonderboy embraced | Watch: McGregor vs Alvarez faceoff | Five minutes of presser highlights

“In Poland this is something big, really big,” Kowalkiewicz said. “Everybody is talking about this.”

As a result, both fighters will likely be subject to more media attention than ever before at home, and that can be a distraction, so Jedrzejczyk has decided to set up camp in south Florida, where she is now working with American Top Team.

“I want to make my name more in the U.S.,” she said. “And I feel like I can do this. I moved to Florida last week to American Top Team and I'm very happy. My main coach is former WEC champion Mike Brown, there's Kami and Katel, and Dyah, who is my boxing coach. I'm very happy, I'm very open, I'm learning every day, I challenge myself every day, and this fight is going to be different and epic and I'm very happy that I made this move.”

On the other side of the Octagon, Kowalkiewicz is staying home for training camp and she’s fine with that.

“I just focus on training and that's it,” she said. “I don't have a problem with concentration on training.”

The countdown has already started, and while the clash of compatriots will garner world-wide attention, Jedrzejczyk wanted it to happen on the historic UFC 205 card in NYC.

“Lots of people in Poland, they wanted this fight to happen in Poland, but I wanted this fight to happen here in New York because I am the UFC champion, I defended my title three times and I must enjoy my fights for all the people around the world,” she said. “That's the main thing. Of course I want to fight in Poland, maybe next year, but it was my dream to fight in New York, and I'm very happy.”