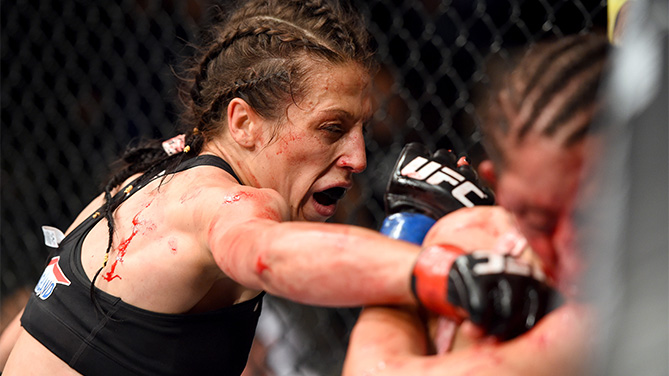 Poland’s Joanna Jedrzejczyk sent yet another message to the strawweight division Saturday at the O2 World Arena in Berlin, successfully defending her UFC 115-pound title for the first time with a one-sided third-round TKO of number three-ranked contender Jessica Penne.

The message? You can call her Joanna Champion for a while.
> Watch Joanna Jedrzejczyk Octagon Interview | Backstage Interview

“Nobody’s going to take this belt from me,” she said. “Are they ready for me? No. I put on a great performance. I was ready for her.”

The pride of Olsztyn, who was defending the title she took from Carla Esparza in March, looked to be ready for anyone, as she dismantled a quality contender with a ferocious striking attack and solid takedown defense.

After an intense staredown in the middle of the Octagon during referee Marc Goddard’s instructions, the combatants got down to business, Penne willing to stand with the champion, but Jedrzejczyk’s quick combinations prompting the American to seek a takedown. Jedrzejczyk resisted a trip to the canvas the first time. 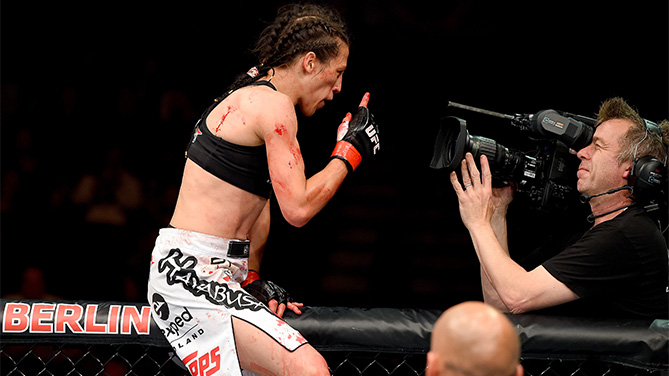 The second though, Penne got her to the mat, albeit briefly. Once upright, Penne went all in for the takedown, but Jedrzejczyk wasn’t having it, with an elbow punctuating their separation. With a little less than 90 seconds left, a right hand knocked Penne down, but the challenger, now bleeding from the nose, recovered quickly, even getting a throw in at the horn.

Willing to take a couple shots to get close for the takedown, Penne didn’t alter her game plan, but when Jedrzejczyk threw off the attempts, she made Penne pay with punches and kicks. With under three minutes left, a flush elbow busted Penne’s nose up and Jedrzejczyk moved in for the finish, unworried about anything coming back from the challenger anymore. The ultra-tough Penne refused to back down, but things weren’t looking good.

The courageous Penne answered the horn for round three, Jedrzejczyk doing the same, but the two were in vastly different positions when it came to the possibility of winning the fight. 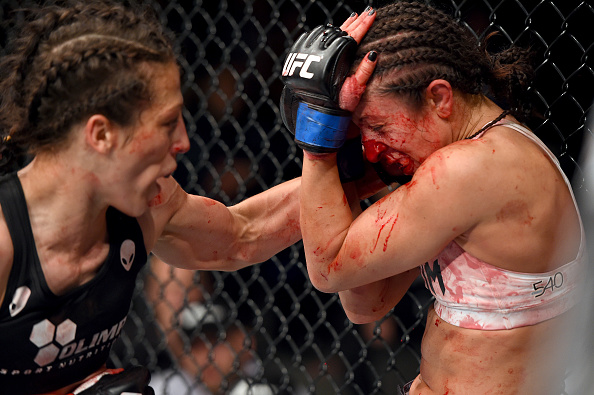 The Olsztyn native didn’t lose her cool in her attempt to finish, but she didn’t let up her assault either, with Penne’s retorts becoming more and more desperate as her face continued to show the scars of battle. Finally, a quick flurry against the fence in the final minute prompted Marc Goddard to halt the fight. The official time was 4:22 of the third round, and when it was over, Joanna Champion had just one question: