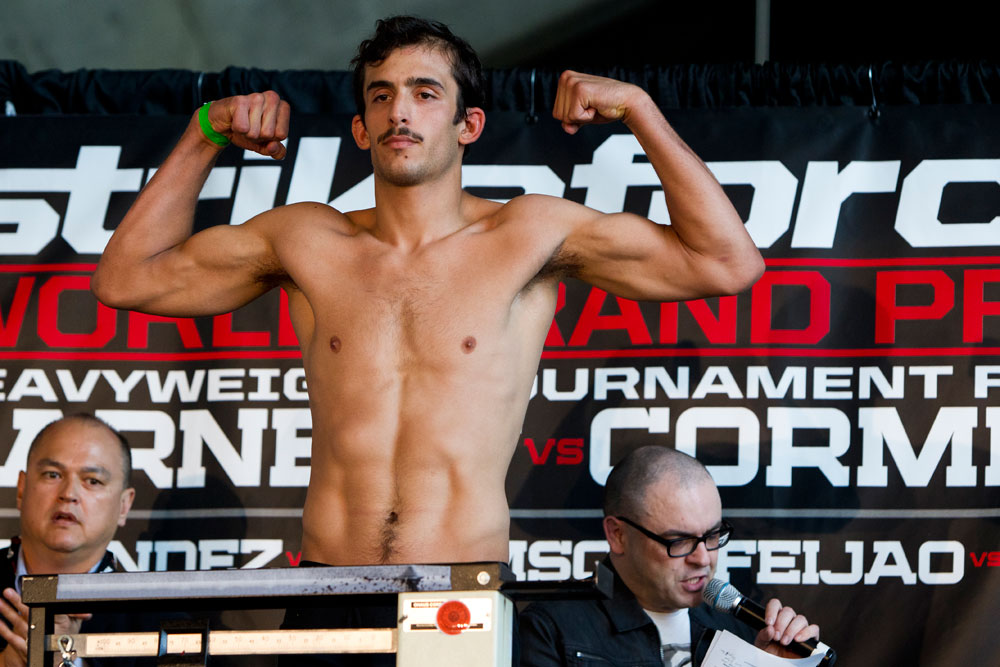 Debuting UFC welterweight Quinn Mulhern is unlike any other Octagon newcomer you’re likely to run into. Case in point, before the biggest fight of his career last September against Jorge Santiago, he had to be reminded who the champion of his division in Strikeforce (Nate Marquardt) was.

It’s not that he didn’t care, it’s just that for a mixed martial artist like the Albuquerque prospect, things like that really don’t matter if they’re not right in front of you. So when the fight against Santiago was scrapped (along with the entire card), with the closing of Strikeforce’s doors to follow, you got the distinct impression that with his personality, Mulhern wasn’t going to stay up nights sitting by the phone waiting for the UFC to call.

“It’s hard to say because I don’t know anything else than my own personality, but I think so,” he laughed when asked if his demeanor helped him deal with the couple months in MMA limbo. “I think some people that I’ve known, they’ve had bad stuff or ambiguous stuff happen to them in their careers and they go off the deep end. They party too much or get fat or lazy, and I knew that could possibly happen to me too.”

To combat such a fall, which would have been catastrophic for an 18-2 fighter with a three fight winning streak under his belt, Mulhern packed his bags and left Santa Fe to move to Albuquerque, where he could train with Greg Jackson’s camp in MMA full-time instead of part-time.

“When I found out the last fight was cancelled, I just felt like I needed to make a change to keep my career moving,” he said. “It was like if I didn’t make that change, I would kind of get stuck. It was kind of a superstitious fear more than anything real rational. I said I need to start to move forward so when the big call happens, I’m very ready and I’m in the right place for myself. And that’s what I did.

“Coming to Jackson’s was a challenge,” Mulhern continues. “So over the last few months, I’ve been working out pretty consistently and pushing myself and trying to actually reach goals. So it hasn’t been a waste of time. I’ve been working toward something and it’s been a challenge that has made me stay sharp.”

Eventually, manager Monte Cox called up with an offer to fight Rick Story at UFC 158 this weekend. Mulhern accepted, and if you’re wondering, yes, he’s familiar with “The Horror.”

“I remembered some of his fights, especially his fight against (Martin) Kampmann, so I knew who he was,” he said. “He’s obviously a good fighter and he’s beat some very good guys, but the way I saw it was, I’m not gonna get a lot easier than this. Maybe for one fight or two, but at some point it’s gonna get tough like this for every fight I have in the UFC. No one’s a slouch.”

Neither is the 28-year-old Mulhern, a Brazilian Jiu-Jitsu black belt who has submitted opponents in 11 of his 18 wins, with his only losses coming against Mike Guymon in 2009 and Jason High in 2011. Among his victims are Ricky Legere, Chris Brennan, and Rich Clementi, and in his most recent bout last May, he decisioned then-unbeaten Yuri Villefort. Not a bad run for someone who had no visions of fighting when he began studying jiu-jitsu in 2003, four years before he strapped the gloves on.

“At first it was all jiu-jitsu,” said Mulhern. “I loved it and that was it. Really it wasn’t until I started helping people train for MMA, and it was just that curiosity thing. Then it started going well for the first couple fights and I just kinda made a decision – I was like ‘if it’s gonna happen, it’s now or never.’ I have to try and put everything into this.”

That meant no thought of using his Western Literature and History of Philosophy degree; it was only MMA, and nearly six years after his first pro fight, he’s made it to the big leagues. Is he ready for it? He laughs, saying “I think what I tried to imagine in my head is that it’s gonna be Strikeforce times maybe five or six, something like that.”

That’s probably accurate. But when the bell rings, it will be business as usual for Mulhern, who is succinct in declaring what he hopes the fans take away from his UFC debut.

“I just want them to like how I beat Rick Story,” he said. “I want them to see that I belong there, which is something I believe, so I’ll just prove it.”