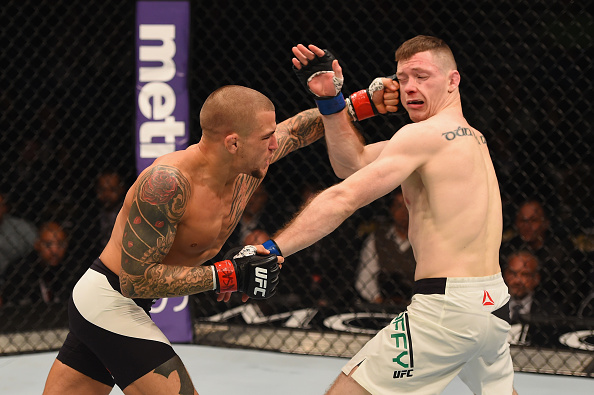 The wait was worth it for Dustin Poirier in his UFC FIGHT PASS featured bout against “Irish” Joe Duffy Saturday, as the 12th-ranked lightweight contender scored a shutout three-round unanimous decision win at the MGM Grand Garden Arena in Las Vegas.

Scores were and 30-27 twice and 30-26. The bout was originally scheduled for October in Dublin before a Duffy injury forced a postponement, which was just fine for Poirier, who has now scored three consecutive wins since returning to the 155-pound weight class.

Neither fighter wasted any time getting down to business, with the exchanges coming fast and furiously. Poirier held an early edge, but Duffy soon got into a rhythm with a boxing-based attack that saw him rock Poirier with a right hand in the second minute. At range, Duffy was picking Poirier apart, but when the Louisiana native got close, his dirty boxing was effective, leading to a takedown with two minutes left. On the ground, Poirier slammed a hard elbow into the bloodied face of his opponent just before the two stood and separated. And while “The Diamond” went back to his corner bloodied as well, his strong finish left an impression.

Duffy left his corner for Round 2 with his left eye rapidly closing, but it didn’t deter him from his attack. Poirier responded with a takedown with a little less than four minutes left, and as blood flowed from what looked to be a broken nose, he kept the Irishman grounded with a solid array of strikes that punished Duffy until the horn sounded.

A minute into the final round it was another takedown for Poirier, who opted for the “if it ain’t broke, don’t fix it” strategy. Duffy attempted a leg lock from the bottom, causing some tense moments for Poirier, but once the Louisianan escaped, he got back to work from the top position. A restart from referee Chris Tognoni with 1:15 left gave Duffy some new life, but a takedown in the final minute cemented the round and the victory for Poirier despite a late triangle choke attempt by Duffy. 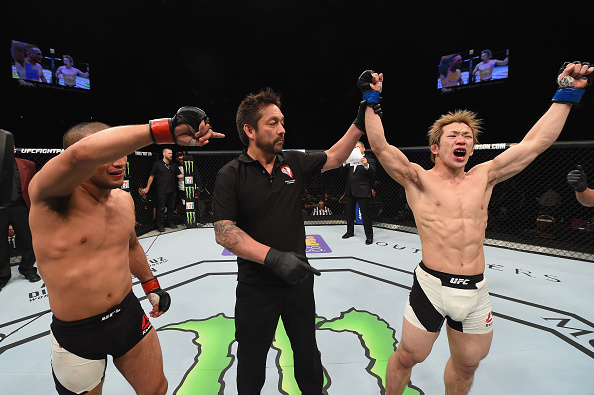 It was a close first round, both fighters having their moments on the feet, and a Tanaka takedown nullified by a Soto gogoplata attempt.

Tanaka began putting his combinations together in round two, and another takedown in the third minute added to his point total. A Soto guillotine attempt kept things interesting, but the Kanagawa native remained in control on the mat for the rest of the round.

The forward marching Soto tried to goad Tanaka into a brawl in the final frame, and he landed a few hard lefts in the process. A Tanaka takedown stopped the bleeding for a spell, but another guillotine attempt and some more big punches and a takedown in the closing seconds put an exclamation mark on the round for the Californian, but the work put in by Tanaka in the first two rounds was enough for the victory. 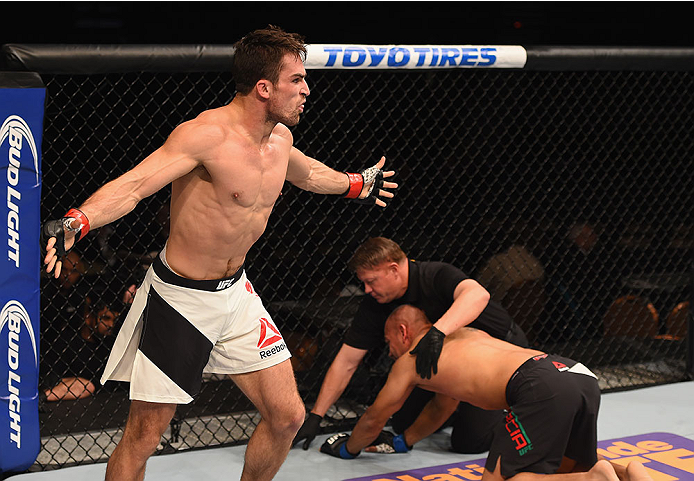 TUF Nations finalist Sheldon Westcott got back to his winning and finishing ways in the welterweight opener, snapping a two-fight losing streak with a first-round TKO of Edgar Garcia.

After eating a couple hard right hands to start the bout, Westcott took Garcia to the mat 45 seconds in and quickly took his foe’s back. From there, Westcott fired away with a series of unanswered blows until referee Chris Tognoni finally stepped in and halted the bout at the 3:12 mark.