Poirier promises to put on a show, every time 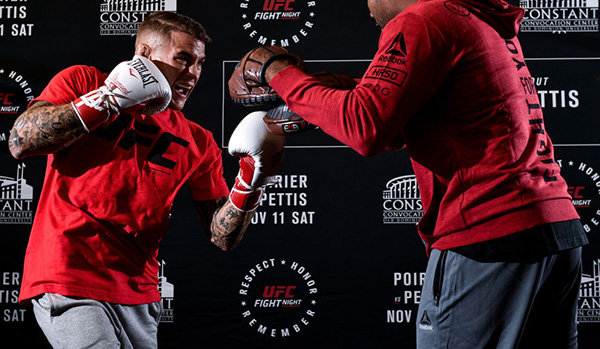 After last weekend’s epic UFC 217 event in New York City, the normal reaction is that there will be a post-epic letdown. A glance at Saturday’s UFC Fight Night card in Norfolk says otherwise. But is there pressure on one-half of the main event – Dustin Poirier – to deliver the goods on a card featuring some of the top action heroes of this era?

“It’s no added responsibility on me,” said the lightweight contender, who faces former 155-pound champion Anthony Pettis. “Just like you can count on the electric bill to come in every month, every time I fight, you can count on me to fight. I’m gonna put on a show and I’m gonna leave it all out there. That’s a promise.”

“Right, but you can guarantee it’s coming,” he laughs. 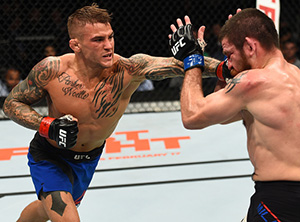 It is a comforting thought knowing that as Saturday turns into Sunday, Poirier and Pettis are going to be bringing it and closing the show in style. It shows how far the pair have come from the days in the WEC where they first announced their arrival. There have been ups and downs for both, but they’ve stayed true to themselves. That’s especially impressive in the case of Poirier, who had every excuse to go astray, but instead used his stay in the school of hard knocks to become a man.

“I had to grow up at a very young age,” he said. “I was living on my own at 16 years old, but I listened very well. I ask a lot of questions when I’m around people who I look up to or who I’m interested in, and when they speak, I listen.

“I know people and I know myself, and the older I’m getting, the more I know myself,” Poirier continues. “Like they say, adversity introduces a man to himself and I’ve been introduced a couple of times. Now I’m just happy with the person I am. I’m a father, a husband, a hard worker, a dedicated martial artist, and knowing that, it’s an accumulation of all those things – coming up hard, fighting for everything I ever got, and listening. If you use those lessons that life has taught you coming up, every day you get a little bit better. You learn how to make things happen, and I make stuff happen.”

If Poirier is settled at 28 years old, that’s accurate. But that’s in life. In his fighting career, “The Diamond” is as hungry as ever, and to beat him, you better catch him with something early or be willing to dig deeper that he is, which isn’t easy. So is Pettis, who defeated Jim Miller in his return to the lightweight division in July, the same guy as the Lafayette native is these days?

“He’s been off and on since he lost the belt, but he’s still very dangerous with his unpredictability, his kickboxing and also his jiu-jitsu,” Poirier said of “Showtime.” “I think he’s submitted more people than he’s knocked out, so we can’t look past that. But where I’m at in my career and the way I feel, I feel like it’s the perfect matchup at the perfect time.”

Since making his own return to 155 pounds in 2015 after an 8-3 run at featherweight, Poirier is 5-1 with 1 NC and has looked sharp in finishes of Carlos Diego Ferreira, Yancy Medeiros and Bobby Green. In his most recent bout in May, Poirier appeared to be on his way to a stoppage of Eddie Alvarez before Alvarez landed an illegal knee that prompted a no contest call. But his effort against the former champion gave Poirier confidence that he was on the right track, and when you add in the work he’s getting in the American Top Team gym in Florida, he’s even more secure in his belief that this weekend will be a good one for him.

“This is gonna be my 21st fight with the company,” he said. “I’m a young veteran, but I love what I do and I’m still very passionate about getting better and closing holes and finding out new ways to do things. I love the pure essence of this combat that we do and that I can do it for a living and provide for my wife and daughter. I fight for a lot of reasons and I actually love fighting.

“It’s just the challenge every day,” Poirier continues. “The sport’s always evolving and I’m keeping up with these young guys. When I’ve got these guys who are 22, 23 coming in the gym and they’re great athletes, then I have to use the skills that I’ve got over the last ten years. It’s fun. It’s an ever-evolving game and you have to be on your Ps and Qs at all times or you get left behind.”

“…And Dustin Poirier’s bringing violence, for sure,” he laughs.