Poirier Eager for the Test of Two Featherweights

"He has never seen anybody like me in the UFC. I’m one of a kind and we’ll see how he’s going to handle it come fight night." - Dustin Poirier 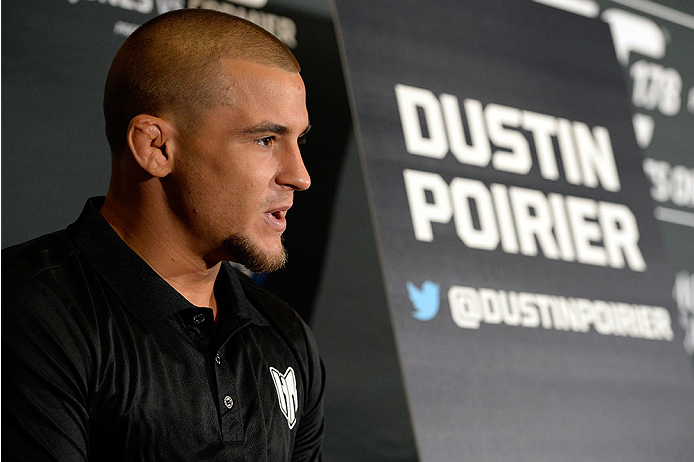 Before Donald “Cowboy” Cerrone welcomes Eddie Alvarez to the UFC in what is sure to be one of the year’s best fights at UFC 178 in Las Vegas’ MGM Grand Garden Arena on September 27th, Dustin “The Diamond” Poirier is expected to put “The Notorious” Conor McGregor through his toughest test thus far in his fight career.

The featherweight bout will be the third fight on a main card headlined by the UFC flyweight title fight between Demetrious Johnson and Chris Cariaso.

“He has never seen anybody like me in the UFC,” Poirier says. “I’m one of a kind and we’ll see how he’s going to handle it come fight night.”

Indeed, while McGregor entertained a raucous Boston crowd with a unanimous decision victory over Max Holloway a little over a year ago at TD Garden Arena, that fight lasted twelve minutes and seventeen seconds longer than when Poirier fought Holloway, submitting him with a textbook perfect mounted triangle armbar at 3:23 in the first round back at UFC 143 in February 2012.

While never one to play that MMA math game of “I beat that guy, therefore I should beat this guy,” Poirier is anxious to derail the hype train the Irishman is riding into this fight.

“I love this,” he said. “Not only because he have all this hype but also because he’s doing all the footwork. He’s out there selling this fight and running his mouth so people want to watch our fight, and I’m over here training my ass off. I love it. This is a perfect opportunity.”

McGregor will be a test for Poirier as much as Poirier is a test for McGregor. After all, Poirier has come up short in both of his highest profile fights, first against Chan Sung-Jung – a title eliminator bout – and another against Cub Swanson.

As far as lights go, they don’t get any brighter of late than when they’re shining on McGregor, but Poirier is looking forward to the test.

“Mentally, all my fights I’m always very focused and prepared,” he said. “I don’t expect this fight, or any fight for that matter, to be an easy fight. I expect I am going to go out there and have a battle and have to dig deep. Maybe get into a dogfight if I have to, but to tell you the truth, I enjoy that. I enjoy testing myself always.”

And he has, against the division’s biggest names, besting everyone from Erik Koch to Diego Brandao and Akira Corassani, winning nine of his last eleven fights. He is currently on a three-fight win streak.

At American Top Team, where Poirier trains in Coconut Creek, Florida, there are plenty of guys to help “The Diamond” prepare for this fight. He said he’s had one of his best camps and feels confident in his training for the unorthodox striking the southpaw McGregor will present.

“I have a lot southpaws to work with and a lot of guys who strike crazy like Conor does,” Poirier says. “I brought in good boxers, great counter punchers, and ATT has put a great camp together for me. I’ve got Muay Thai, jiu-jitsu, everything I need here.”

For Poirier, a sound strategy would be to take this fight to the ground, where he has consistently displayed a superior jiu-jitsu game than most of his opponents. It shouldn’t be much different against McGregor.

“I’m not going to put myself in any dangerous positions trying to get a takedown and leaving my head out there because I don’t want to underestimate his jiu-jitsu either,” he said. “But if this fight goes to the mat I will know what type of jiu-jitsu he has right away by the way his hips feel and the way he adjusts his positioning. I’ll know right away.

But yeah, I’m looking to choke his neck.”

As far as personalities go, there couldn’t be a starker contrast between McGregor and Poirier. While Conor is brash and in your face, Poirier has always let his fists do the talking, and he has his own theories on why his next opponent is so outspoken.

“The loudest guy in the room sometimes is the most scared,” he said. “Maybe he needs to do that to cover up for his insecurities. If that’s what he needs to do to conquer his fears, good for him. For me, I know what kind of fighter and person I am and I’m very comfortable with my work ethic. I built everything with my hands, not my mouth. I am a fighter and everybody knows I’m a fighter. Everybody knows what I put into this sport. I don’t need to shout it to everybody every time there’s a microphone in my face.”

No matter what he might think of Conor the person, Dustin does respect the fact that he’s done well in this sport, and with good reason.

“Conor has enough fights that he doesn’t do anything reckless. He’s not rushing out there and throwing crazy bombs. He’s calm in the cage. He’s pretty tight and technical, but I fight every fight the same; I fight my fight. I don’t know, I’m just going to get in there and see what happens, and go with the flow. To tell you the truth, I feel like I can finish him on the feet, but no matter where the fight goes I am going to make sure I win those exchanges, whether it’s striking or grappling.”

Those exchanges are sure to bring fireworks to the Las Vegas strip.