Poirier after a Steal-the-Show Bonus This Weekend

"This is gonna be a steal the show bonus. I’m going in there to dominate this guy and show everybody I belong on top." - Dustin Poirier 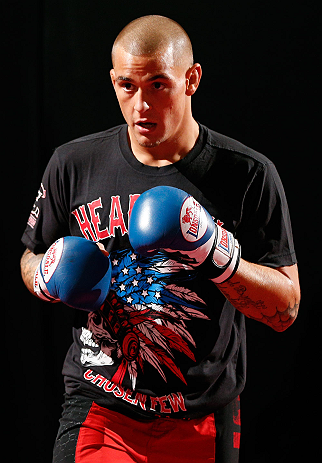 After a ferocious 53 second blitz of Zach Micklewright at WEC 52 in November of 2010, Dustin Poirier figured he had the Knockout of the Night bonus locked up.

“It was my second fight in the WEC, and an extra $10,000 would have been life changing at that time,” he said with a chuckle. “It still is.”

All the Louisiana native had to do was wait out the rest of the card, but then a kid from Iowa named Erik Koch spoiled his plans, scoring a 96 second finish of Francisco Rivera that earned HIM the bonus. Poirier still hasn’t forgotten that night.

“I really thought I had Knockout of the Night in the bank, and he ended up getting it,” said Poirier. “And ever since then I’ve kinda been staring at him through the fence.”

All Eyes on Him

On Saturday night, Poirier gets his chance to stare at Koch from inside the fence when the two meet on the main card of UFC 164 in Milwaukee. A lot has gone on since 2010, with both soaring up the UFC ladder to become featherweight contenders. They were even supposed to meet at UFC 143 in early 2012 before an injury to Koch scrapped the bout, but now the fight will happen, one that was inevitable as far as Poirier was concerned.

“He (Koch) is a young fighter, so am I, so I knew our paths were gonna cross eventually,” he said. “We both come from the WEC, I knew who he was when I was there, so it was gonna happen; there was no way around it.”

In a division full of stellar matchups, this is one of the best, and the fact that both fighters feel the other one isn’t in the same league makes the potential for fireworks even greater. Poirier does have respect for Koch’s talent though…at least a little.

“I see a great kickboxer, a hungry fighter who wants to be successful and fight the best guys,” said Poirier of Koch. “I also see a kid who’s a little bit too confident and a little bit too cocky, and he’s about to run into a real fighter. I feel like I’m maturing, I’m a completely different fighter than I was in my last fight, and I just feel like I’m a bad matchup for him. He thinks he’s a great kickboxer, and he is; he’s good and he’s very technical, but a lot of people think I’m a ground guy and they’ve never got to see my kickboxing. I’ve been kickboxing for longer than I’ve been doing jiu-jitsu or wrestling, so I’m excited to show that.”

Focused on the Future

And even though Poirier is coming off a loss to Cub Swanson and Koch is hoping to rebound from a defeat to Ricardo Lamas, no one really cares, mainly because it’s a great matchup that will likely propel the winner right back into title contention. > Flashback: Dustin Poirier in Fightville

“I know we’re both coming off losses, but nobody’s even looking at that,” said Poirier. “They’re still excited about this fight, this is still a high-profile fight and that’s my goal – I’m gonna go out there and make something special happen August 31st, and then I’m right back at the top. I want to fight Cub Swanson again off a full camp, or I want to get a shot at Ricardo Lamas or a rematch with the Korean Zombie (Chan Sung Jung). I want the big fights, I want to be prepared and I want to win. I belong at the top. So I’m just excited about this fight, to be a hundred percent mentally and physically in the game and ready to fight and go out there and perform. And I’m gonna be right back at the top of the pack, I know it.”

No one calls out Swanson, Lamas, or Jung without having confidence and a championship mindset, and the 24-year-old Poirier is more amped up than ever to make his move.

“I feel like I’m one of the best in the world, and the only way to make that for real is to beat those guys,” he said. “Two of the guys I named I already fought, and one I was supposed to fight, so I’ve been competing with the best guys, and that’s where I belong. And from competing with those guys, I know I can beat them. So I just want my turn again. I want it to be my time. I really feel like I’m growing in this sport and just becoming a man now. I’m ready for the belt and ready for whatever this fight game throws my way. I’m comfortable now, I’m at a great camp (American Top Team), and I’m comfortable with myself and where fighting has put me. I just want to get into some great scraps.”

He’s got one this Saturday night, but he’s not interested in another Fight of the Night.

“I don’t want Fight of the Night because I don’t want him getting any extra money, and I don’t think he has what it takes to make this Fight of the Night,” said Poirier. “This is gonna be a steal the show bonus. I’m going in there to dominate this guy and show everybody I belong on top. I’m gonna finish this guy, on the feet or on the ground, I’m gonna get some extra money, and then I’m going home to Louisiana to cook some good food.”