The motivation that the crowd can inject into a fighter is undeniable. Every fighter wants to hear the roar from the crowd after a huge strike, a well-timed takedown and, of course, when their name is being announced as the winner by Bruce Buffer.

As has been the case for much of 2020, that extra boost from the crowd isn’t possible right now. There’s been mixed reviews from the fighters, but it seems a majority prefer the intimacy a crowd-less fight has provided.

Originally, Charles Jourdain wasn’t on that side. When Jourdain prepared for Andre Fili back in June, he was expecting that he may underperform. The 24-year-old Canadian is known for entertaining and without a crowd to entertain, things are a little different.

“I like the no-crowd affect,” Jourdain said. “I’ve always been a crowdpleaser, so with no crowd I thought I would underperform, but I actually love it. There’s an element of violence and pureness to fighting. It’s just me and you trying to get at each other’s throats.”

Jourdain not only loved not having a crowd, but the fight with Fili was a massive learning point in his career. He lost by split decision, but the bout taught him that he belongs with some of the best in the division.

“I wanted to put my name out there and have crazy performances, but now I realize it’s all about the wins. When I won against Dooho Choi there’s all this TV and opportunity, but then when I lose, even by split decision, it’s a loss in the eyes of the people and your wallet. So the W is the only thing I care about. I belong there. it was a close fight, but I need to be smart and control the aggressiveness that I have. I need to slow down a bit but keep being me. I got to the UFC by being flamboyant and crazy.”

Jourdain will attempt to get his second “W” in the UFC on Saturday when he takes on Josh Culibao on Fight Island.

For the first time in Jourdain’s UFC career, he is not an underdog. With only three years of professional MMA experience, he made his UFC debut against Desmond Green in May of 2019. He fought Green in his hometown of Rochester, NY, then fought Choi in his native country of South Korea, and then Jourdain squared off with the veteran Fili.

Clearly, Jourdain, and the UFC matchmakers, were not afraid to start his run in the UFC by going right into the fire.

“Experience is the biggest thing in MMA and up until Fili I thought it was nothing,” Jourdain said. “The more you fight with the best the more you become a better fighter. When I learned of my opponent (Culibao), I thought, ‘Oh, I’m the guy with the experience,’and it’s a big factor for me. I’ve never been the favorite. The UFC said you’re going to fight guys just like you with similar experience and now I’m the big boy. I’m looking at it like I’m the boss. It’s something weird and there’s something special about it. I don’t mean to get my head too big about it, but I’m the A-side and it’s well deserved.” 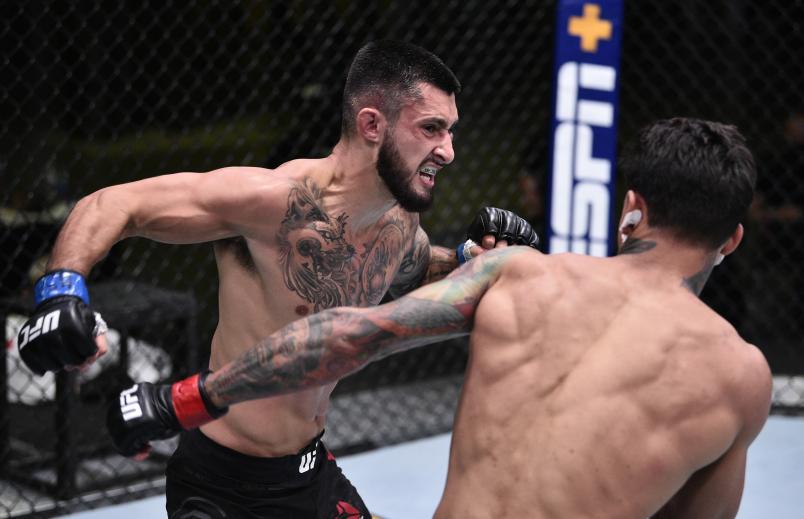 Jourdain may sound overly confident, but he’s not shy to discuss the mistakes he’s made and lessons he’s learned through those first three fights.

A win on Saturday puts Jourdain at 2-2 in the UFC with plenty of experience against longtime UFC veterans. So it’s no surprise to hear what he has planned if he comes away from Saturday victorious.

“I’m devastated by the fact I lost to Fili but even more that I’m not going to fight Cub Swanson in my next fight,” Jourdain said. “I’m in no position to call out anyone after that loss but with a good victory I have some plan on my mind.”

Perhaps with a win Saturday, we’ll get to hear what the plans are.