Jesse Ronson Has Plenty Left In The Tank

“What the hell is that?”

That’s the question Jesse Ronson asked his manager Daniel Rubenstein two weeks after his July 2020 win over Nicolas Dalby on UFC Fight Island, when Rubenstein called to inform his client that he’d tested positive for metandienone, meaning his emotional victory would be overturned and the Canadian veteran would be facing a suspension.

“It was really rough. I was in a really dark place for about two weeks because I was that guy that always posted against steroid users, and now I’m the guy that’s tested positive,” said Ronson, who makes his return this weekend against Rafa Garcia. “I felt like absolute dog**** and knew that people were going to tear me apart.”

Ronson worked with USADA to try and prove his innocence — or at least show he wasn’t willfully using a banned substance — but without any remnants of the supplements he was taking available to be tested, he couldn’t get his suspension reduced.

Not only was an emotional victory that he never thought was going to happen now removed from his record, but he was staring down a lengthy stay on the sidelines as well, so the London, Ontario native did the one thing he could do with the time away — he worked to get better.

“Over the last 20 months, I’ve just been working my *** off — training hard, rounding out my game,” said Ronson. “I feel comfortable everywhere now because it’s like, ‘I have 20 months — let’s put ourselves in some deep waters. Let’s go grapple with the best grapplers. Let’s get our ***** kicked by high-level wrestlers.’ I got to heal up some things that were bothering me, and if I needed to take a day off, I could take a day off. I could say, ‘I don’t want to come in today.’

“I’ve got a really good group of coaches and training partners that were very helpful. I’m better than I’ve ever been. I’m in the best shape of my life right now. I look great, I feel great, and I can’t wait for April 16.”

The eager anticipation for Saturday’s clash with Garcia isn’t just about the last 20 months for Ronson though; it’s much deeper than that.

His fight against Dalby in July 2020 was — in the moment — a fairytale ending to an epic saga that started almost seven years earlier, when he was first signed by the UFC.

Ronson was one of the best emerging talents in Canada when he was tabbed to replace Mark Bocek opposite Michel Prazares at UFC 165 in Toronto. He entered on an eight-fight winning streak and held his own against the Prazares, a bulldozer masquerading as a prizefighter, losing a split decision. 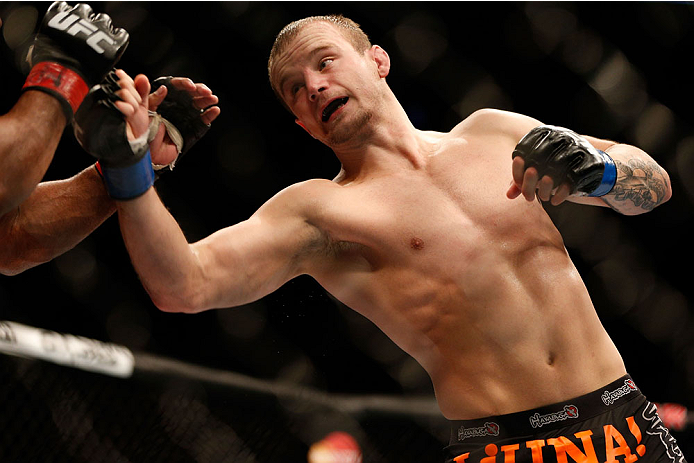 Five months later, he’d drop another split decision to another Brazilian veteran, Francisco Trinaldo, and one more followed five months after that, this time against future title contender Kevin Lee.

The consecutive ticks in the loss column led to Ronson being released by the promotion. It was a decision that felt hasty at the time and grew harder to comprehend as the trio of fighters that narrowly edged him out on the scorecards continued to have long, successful careers inside the Octagon over the next several years.

He won seven of his next 10 fights on the regional circuit and was again called upon for a short-notice opportunity in Toronto, this time at UFC 231 opposite lightweight contender Diego Ferreira. He accepted, but was pulled soon after when it was determined he was too heavy to safely make lightweight.

If that didn’t feel like his final chance to step back into the Octagon had gone by the boards, suffering consecutive losses under the Professional Fighters League (PFL) banner in 2019 surely did.

Four months later, Ronson was paired off with Troy Lamson, a fighter very much on the UFC’s radar at the time, in the main event of a regional show in Kitchener, Ontario — BTC 9 — and quickly choked him out in the first round. The last man to defeat Lamson earned a UFC contract with a unanimous decision win, and now the Canadian veteran had gotten him out of there in less than five minutes.

Five months later, Danny Roberts was forced to withdraw, Ronson got the call, and he ventured to Fight Island, blasting the Danish veteran with a clean right hand before collecting the submission win just past the midway point of the opening round. Odyssey complete, until it wasn’t. 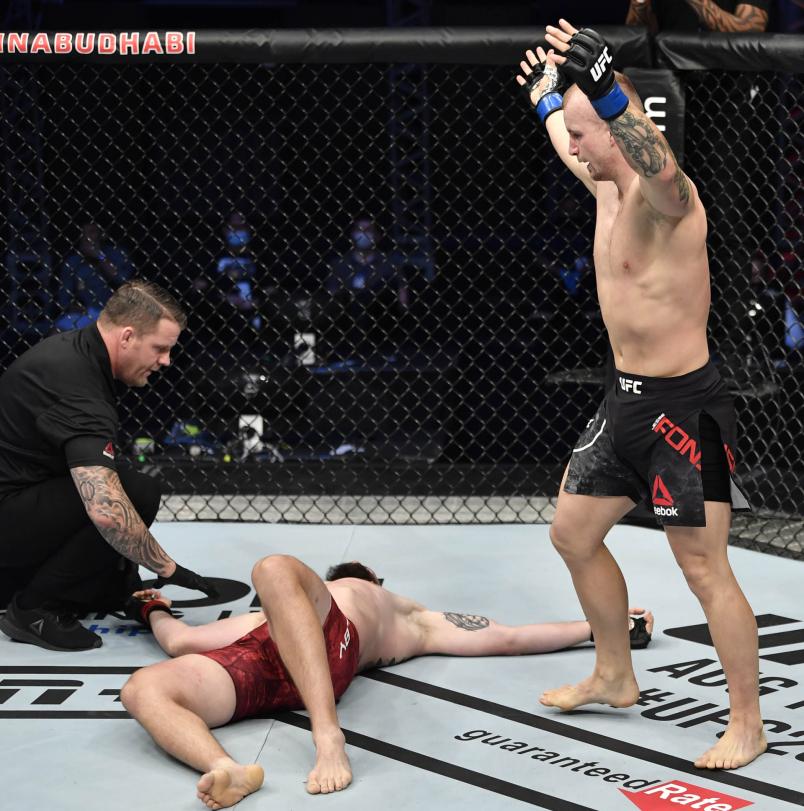 Jesse Ronson of Canada celebrates after his victory over Nicolas Dalby of Denmark in their welterweight fight during the UFC Fight Night event inside Flash Forum on UFC Fight Island on July 26, 2020 in Yas Island, Abu Dhabi, United Arab Emirates. (Photo by Jeff Bottari/Zuffa LLC)

“I need this win,” said Ronson. “I go back to Troy Lamson, when I had lost my two PFL fights: I said, ‘If I lose this fight, I’m retiring, and I’m not ready to retire, I’m not ready to give up, so losing is not an option.’

“Sean Shelby did me a favor. I get that win and then this happens, so it’s like, ‘How much **** is this guy going to put up with?’

Which brings us to this weekend and Rafa Garcia.

The 27-year-old arrived in the UFC with a perfect 12-0 mark with three consecutive wins over former or current UFC fighters. After dropping decisions to Nasrat Haqparast and Chris Gruetzemacher in his first two outings, he notched his first victory last November, out-hustling newcomer Natan Levy.

Despite acknowledging he feels like a caged lion ready to spring on its prey as soon as its gate is opened, Ronson also knows that he can’t rush into things carelessly against Garcia. Instead, he intends to be calm and calculated, while expecting his opponent to be the one trying to chase down an early finish.

“The weaker parts of my game when I first got signed to the UFC were the mental aspects,” said Ronson, reflecting on his growth over the years and how it impacts Saturday’s matchup with Garcia. “It’s like, ‘You worked your whole life to get to the UFC; you’re here’ and I had no plan of what to do, so this is the kind of stuff that I’ve been working on.

“My Fight IQ is higher than ever. I know I need to be calculated and smart, because Rafa Garcia is a wild guy, he does have power and, according to Cub Swanson, he’s the strongest guy he’s ever grappled with, but he’s no Michel Prazares, I tell you that much.

“I think he’s going to be the guy trying to take it to me. He’d be very stupid to take this fight slow because then I will absolutely dissect him and it will be disgustingly bad for him. I think he’s going to come out and try to blast me because I’ve been off for 20 months; I’m the older guy. 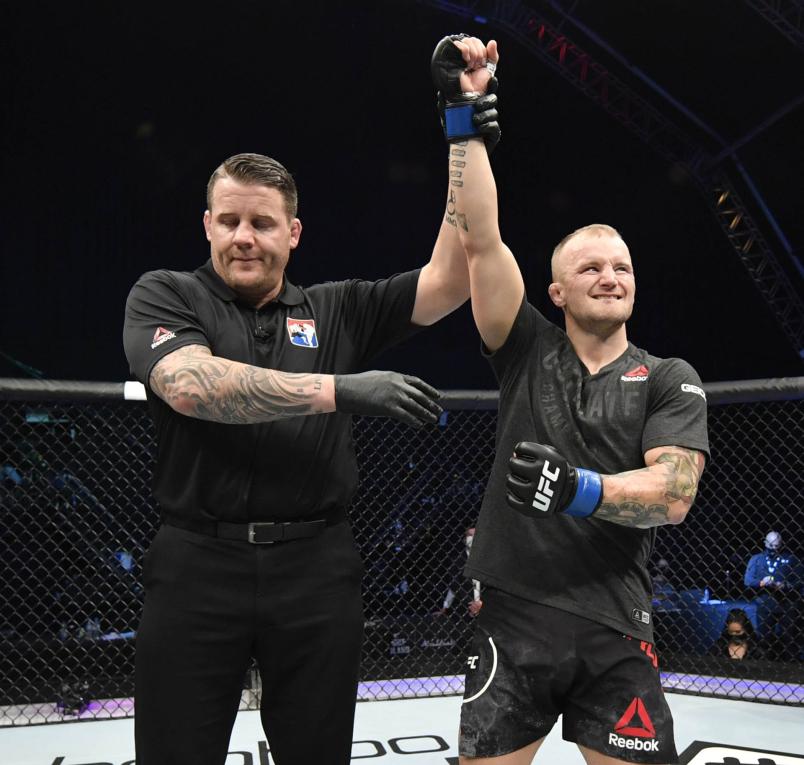 Jesse Ronson of Canada celebrates after his victory over Nicolas Dalby of Denmark in their welterweight fight during the UFC Fight Night event inside Flash Forum on UFC Fight Island on July 26, 2020 in Yas Island, Abu Dhabi, United Arab Emirates. (Photo by Jeff Bottari/Zuffa LLC)

“I feel sorry for Rafa Garcia.”

When he defeated Dalby on Fight Island, Ronson understandably got misty-eyed inside the Octagon — the emotions of the victory and the long journey that preceded it hitting him like a ton of bricks.

Now, as he readies to return to action, still officially searching for that elusive first UFC victory, the 36-year-old veteran says he hasn’t really thought about what he’ll do should he get his hand raised this weekend, though there is one thing he’s always wanted to do.

“I’ve always wanted to climb the UFC Octagon and I’ve never gotten a chance to do it,” said Ronson. “They told me in Abu Dhabi if I jumped on the cage, they would disqualify me no matter what, and I was like, ‘Okay!’

“When the fight was over, I ran to my corner, and the first thing they said was, ‘Don’t jump on the cage!’ The UFC guys that were there were like, ‘Do not get on this cage!’’

He laughed, recalling the stern warnings and concern that he just might do it anyway he was met with that night in Abu Dhabi.

“Now it feels right because I’m fighting at ’55, which is my weight class, and it’s in Vegas — the UFC’s home, the ‘Fight Capital of the World.’”

Catch All The Prelim Action With Your ESPN+ Subscription

So if he wins on Saturday, you’ll know where to find Ronson — perched atop the cage, probably crying tears of joy, having finally completing the latest leg of his long, strange trip to his first UFC victory.