ORLANDO, April 19 – After four surgeries and a two-year layoff, former welterweight title challenger Thiago “Pitbull” Alves made a triumphant return to the Octagon Saturday at the Amway Center, but he had to dig deep and fight for 15 minutes to take his exciting three round unanimous decision win over the always tough Seth Baczynski.

Alves looked as sharp as anyone coming off a two-year layoff had the right to, peppering Baczynski with leg kicks and going upstairs with quick punches, all the while putting an extreme amount of pressure on his opponent as he pursued him around the Octagon.

There was more of the same in round two, but as Alves slowed down slightly, Baczynski got back into the fight, with both men going back to the corner bloodied after a consistent series of exchanges.

Neither fighter gave an inch in the final round either, and though the more accurate and dynamic striking of Alves, Baczynski is likely to have gained plenty of fans after a stellar effort in defeat.

It wasn’t going to win any Fight of the Night awards, but Khabib Nurmagomedov’s 22nd win without a loss was another dominant effort, as he shut out Rafael dos Anjos over three rounds, snapping the Brazilian’s five-fight winning streak in the process. 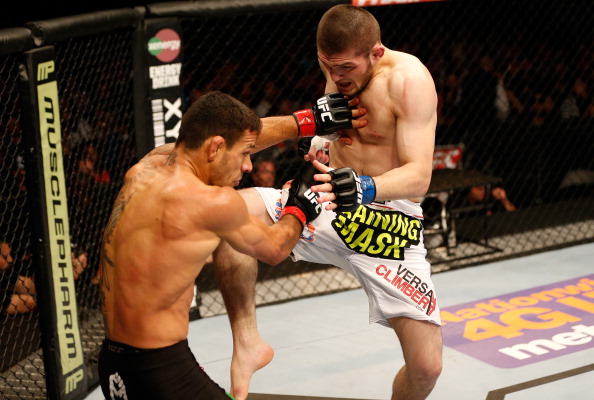 Nurmagomedov’s takedown dominance continued, as he put dos Anjos (20-7) on the canvas in the second minute, albeit briefly. And though the Brazilian tried to work a stick and move strategy, the Dagestan native’s plan was to rush with punches and get the takedown, a method that was working for him because even when he couldn’t get the takedown, he landed enough shots on the way in and controlled the action to such an extent at close range that the points were piling up.

An early second round takedown by Nurmagomedov almost ended in disaster thanks to a dos Anjos guillotine choke attempt, but “The Eagle” pulled free and once again resumed control at close quarters, putting another round in the bank.

Dos Anjos showed plenty of urgency as he came out for the third round, knowing he needed to turn things around, and fast. But after some positive early moments, a thudding takedown by Nurmagomedov put the ball back in the Russian’s court, and he kept it there until the final bell.

In a meeting of former Strikeforce standouts, Florida’s own Jorge Masvidal thrilled his hometown fans with an impressive three round unanimous decision win over Pat Healy.

Masvidal (26-8) was on target with his punches, elbows, and kicks from the outset, drilling the 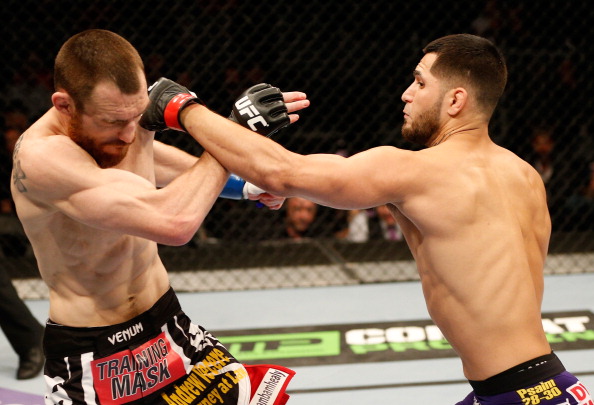 steel-chinned Healy throughout the first five minutes. Healy was able to get Masvidal to the mat briefly, but when he wasn’t close enough to get the takedown, it was a rough opening round.

The second round was a carbon copy of the first, only this time Healy (31-18, 1 NC) wasn’t able to put Masvidal on the canvas, making things even worse for “Bam Bam,” who remained relentless, just unable to implement his game plan.

Just before the midway point of the final round, Healy saw some daylight with a strong takedown of Masvidal, but it was the Floridian who ended up in the dominant top position. And while Healy tried to rally in the final seconds as the two stood, it wasn’t enough to turn the tide.

Calling this fight a slugfest would be an understatement, as Payan (14-6, 1 NC) was throwing – and landing – bombs from the opening bell. White (10-0) had the last word though, beginning with a straight left that put Payan on the deck. A series of flush punches to the face followed, with referee Jorge Ortiz intervening at the 1:28 mark. Payan jumped up immediately in protest, but the call stood.

In middleweight action, Caio Magalahes made quick work of late replacement Luke Zachrich, halting the Ultimate Fighter vet in the first round.

Magalhaes and Zahrich got acquainted immediately, but it was Magalhaes’ wild swings that began to set the pace, and after a short left hook to the liver stunned the Ohio native, Brazil’s “Hellboy” pounced, with referee John McCarthy calling a stop to the fight 44 seconds into the opening round.

In his first fight in a year, welterweight veteran Jordan Mein got back in the win column, taking a close split decision over Brazilian newcomer Hernani Perpetuo.

Mein (28-9) showed no signs of ring rust from his long layoff in the opening round, dominating the action on the feet and the mat. And while he didn’t kick it up to the point where he had Perpetuo in serious trouble, things weren’t looking good for the Brazilian.

Perpetuo (17-4) got into a bit of a rhythm in round two, a turn of events aided by Mein’s drop in work rate. The Canadian did make sure to secure a late round takedown through, clearly able to put his foe on his back whenever he wanted to.

Some of the fight’s best exchanges took place early in round three, with Perpetuo aggressively pursuing Mein around the Octagon. Mein ended his opponent’s rally with a takedown, and after eluding a leg lock attempt, he was able to get back to his feet. While there, Perpetuo taunted Mein, trying to goad him into a brawl, yet after another strong rally, Mein took him down again, keeping himself out of further danger.

After losing a controversial split decision to John Moraga in January, Dustin Ortiz was on the other side against newcomer Ray Borg, spoiling his foe’s perfect record with a three round split decision victory.

The first five minutes were fought primarily on the mat, with both fighters taking turns in control, but Borg getting the bigger reaction from the crowd for two slams of the Milwaukee native.

Ortiz began his offensive attack in round two with a slam of his own, moving right into side control. Borg reversed position, got his own takedown, and then took Ortiz’ back. Yet despite the Albuquerque product’s best efforts to sink in the rear naked choke, Ortiz’ defense was solid and he made it out of the round.

With his striking pretty sharp in round three, it made you wonder why Ortiz didn’t go to it earlier, but despite being the victim of another slam, he had apparently done enough on the scorecards to get the win.

In a meeting of featherweight unbeatens, Mirsad Bektic picked up his first UFC win with a close majority decision victory over Chas Skelly. 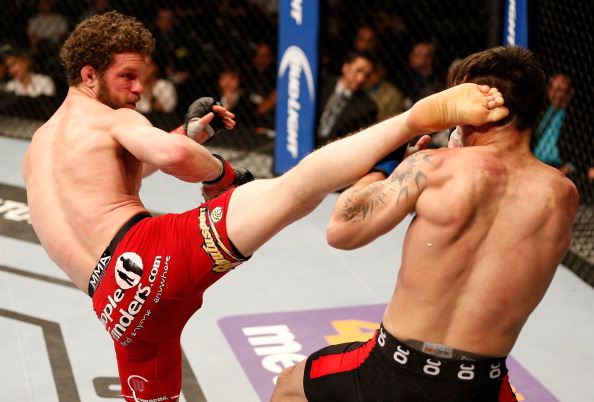 Bektic took a little while to get warmed up, allowing Skelly to land a few hard shots over the course of the first round, but in the final minute, Bektic got the fight to the mat and proceeded to drill his opponent with ground strikes until the end of the frame.

Skelly started to pull ahead in the closely contested bout in round two, but after jarring Beltic with a right hand, two knees to the head while Bektic had his hand on the mat brought a point deduction from referee Jorge Ortiz and a short break in the action. It also left Skelly in a must finish situation entering the final stanza.

A minute and a half into the last round, Bektic scored with the takedown, but Skelly was able to reverse position and take his foe’s back. Bektic defended well, returning to the top position until the two rose with a minute left. Skelly aggressively went after Bektic, only to return to the mat for the final ticks of the clock.

Heavyweight Derrick Lewis opened up the card with a win in his UFC debut, stopping fellow newcomer Jack May in the first round.

The bulk of the bout took place on the mat, with Lewis and May swapping positions until Lewis took control on top and began raining down blows. After a series of unanswered shots, referee John McCarthy stopped the bout at the 4:23 mark.

Lewis improves to 10-2 with 1 NC; May, who left the ring limping due to an injured knee, suffers his first defeat, falling to 7-1.