The "Pitbull" Leaves Hard Times Behind

“I did a lot of soul searching and questioning of myself. I asked myself if I really belonged in this sport.” - Thiago Alves 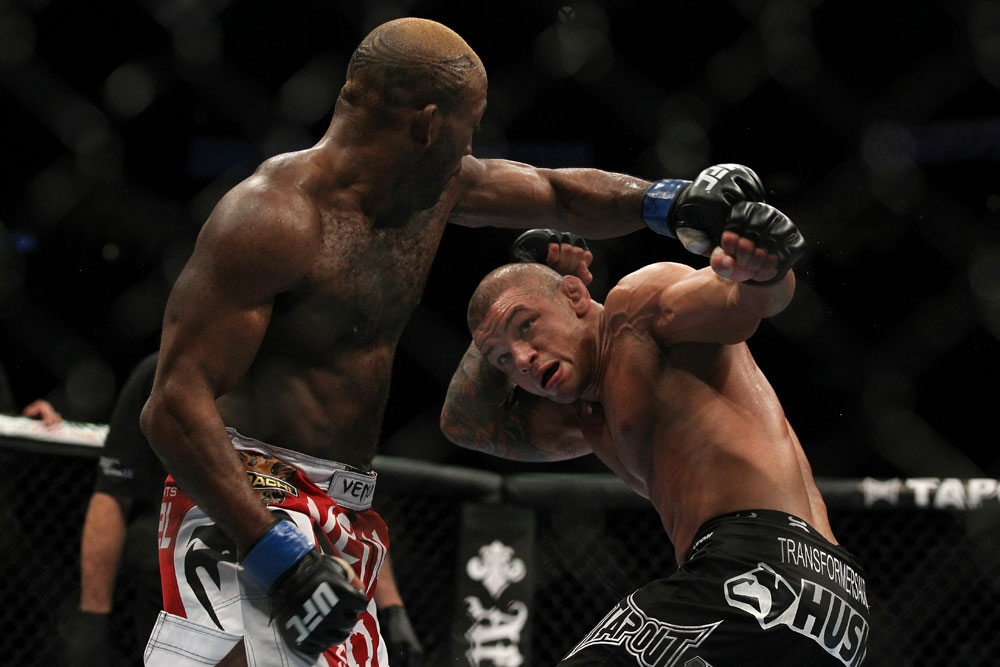 After winning seven bouts in a row over the course of two years and becoming the number one UFC welterweight contender, Thiago Alves lost two decisions in a row. And although losing to the two men he did (champion Georges St. Pierre and top contender Jon Fitch) is nothing to be ashamed of, the defeats reversed Alves’ trajectory immediately and were crushing to the “Pitbull.”

“I did a lot of soul searching and questioning of myself,” Alves says. “I asked myself if I really belonged in this sport.”

In the end, Alves knew in his heart that he did. And, for two reasons, he decided to come back and start from scratch – with a vengeance. Alves’ first reason was his family, the second was his potential.

“I realized that there was not much choice. You either give up and stop or move forward and I never give up. I know I’m not in my prime yet. I have a lot to give and a lot to show,” he says of his considerable abilities.

But even more than that, Alves, a Brazilian immigrant, knew he couldn’t forsake those he left behind as well as his own dream. “I remember all my family who have supported me coming here and becoming a fighter, and I just couldn’t give up all these dreams,” he says.

Of course, Alves had to go through more than losses, he also had a life threatening brain condition and resulting surgery. He recovered from that and got back in the win column last December by beating John Howard.

Though it ultimately came down to motivating himself, Alves says that his family was crucial to his rebounding. “Family is everything. Once you go through hard times you realize what’s really important for you. Once you got that out of the way, you know it’s not going to be hard,” he says.

Alves’ perspective even allows for him to not dwell on those former friends that fell by the wayside when he was down and out. “Once you shine everyone wants to be around you. When you have losses you really see who is there for you for the right reasons. Every fighter needs to go through that. It sucks but it’s the best thing that ever happened to me. And it’s all in the past,” he says.

It’s helped make him a different person, and fighter. Fans who’ve witnessed Alves grow from a more one-dimensional striker in his early years in the UFC to a well-rounded fighter with solid jiu-jitsu and wrestling to go along with his Muay Thai might be surprised to hear him say that he works even harder now than he used to.

“Oh yeah, I’m ten times the professional that I used to be,” Alves proclaims. “I always trained hard because I’m a hard worker, but I just trained because I knew I had to train. I didn’t know much about the sport, I didn’t know much about my body. My mindset when I got the title shot was that I was just having fun. Everything just kind of came. Now I’m doing the same things as before but with the mindset of always doing the right things and making the right decisions. It makes a huge difference. I’m a much better fighter I was two years ago. I think I needed to hit rock bottom to get going again.”

Alves will put his revamped lifestyle and training regimen to the test against Rick Story at UFC 130. Like in his last fight, Alves is pitted against an aggressive young prospect with knockout power. The American Top Team member sees similarities between his opponent and a past self.

“In Rick Story I see myself a few years ago,” Alves says. “Very aggressive, lots of power, always pushing forward. And it’s a great opportunity for him, fighting a veteran of the UFC who has been around for years. I’m pretty sure he’s very excited. I’ve been in his shoes before. He’s going to have fears and doubts and that’s what I am going to capitalize on. He is a good fighter, has good power and is a good wrestler, but I truly believe that I am going to outclass him everywhere. Let’s see how aggressive he is against me.”