The Pit Bull Bites Back, KOs Silva in Rematch 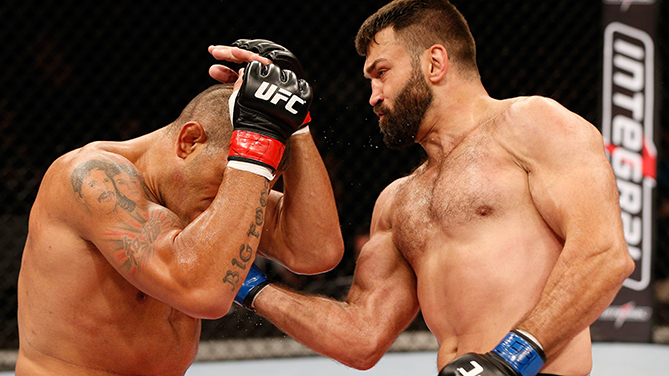 Written off by many after a lackluster effort in his June victory over Brendan Schaub, former UFC heavyweight champion Andrei Arlovski announced his re-emergence into the title race Saturday night at the Ginásio Nilson Nelson in Brasilia, Brazil with a first round knockout of Antonio “Bigfoot” Silva.

“I trained hard, I worked a lot, it was very important for me,” Arlovski said of the fight. “I “definitely wanted to knock him out. Nothing personal.”

The bout was a rematch of a 2010 Strikeforce bout won by Brasilia’s Silva via decision. This time, the judges would not be necessary.

Arlovski’s speed and movement served him well in the opening stages of the bout, while Silva stalked with bad intentions, waiting to land one of his bombs. The in and out style of Arlovski was the story of the fight though, as he scored with quick shots and got out of there before any incoming fire could get to him, and just before two minutes remained, “The Pit Bull” attacked, with a hard right hand putting Silva on the deck. The follow-up barrage by Arlovski closed the show, with referee Jerin Valel stopping the fight at the 2:59 mark.

With the win, the 35-year-old Arlovski, who has won four straight, ups his record to 23-10 with 1 NC; the 34-year-old Silva, who was fighting for the first time in his home country of Brazil, falls to 18-6 with 1 NC.
TIBAU vs. HALLMANN 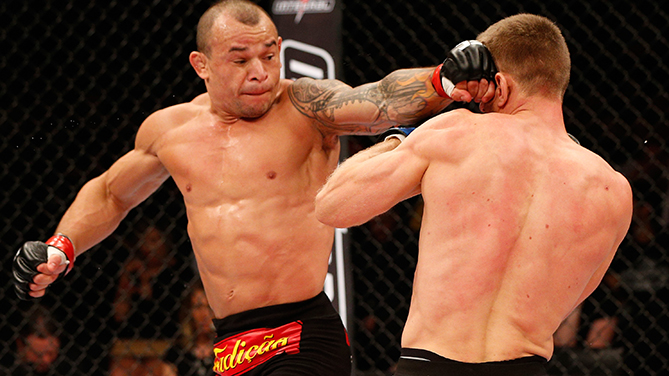 Lightweight veteran Gleison Tibau made it four wins in his last five bouts, taking a workmanlike three-round split decision over Piotr Hallmann in the co-main event.

A left kick to the body got Hallmann’s attention immediately, and he kept the pressure on his foe from there, using more strikes to close the gap and tie things up. Once Hallmann got free, the pace settled down and the Poland native began to get into a rhythm, but it was Tibau with a thunderous takedown with two minutes left to break that up. Hallmann got up immediately, but getting a consistent offensive attack together wasn’t forthcoming for “Pletwal.”

Tibau had another strong start in the second, rocking Hallmann with a spinning back fist, but again, the Polish prospect was able to shake the shot off and get back into the fight. Unfortunately, he needed to do more than just be competitive, and he wasn’t able to pull away against the Brazilian.

Told by his corner that he was down two rounds, Hallmann came out aggressively for the final round but that allowed Tibau to get the takedown. Hallmann was up almost as soon as he went down, but Tibau kept him pinned to the fence. Just before the midway point of the round, a knee from Hallmann bloodied Tibau bad enough that referee Mario Yamasaki halted the action to have the Octagonside physician inspect the cut. After being cleared to continue, Hallmann continued throwing close range knees, and then moved to elbows, capping off a grueling bout impressively, but with not enough to take the win.
SANTOS vs. ESCUDERO

Scores in the lightweight bout were 29-28 across the board.

After a short feeling-out process, Santos took Escudero to the mat in the second minute and he went to work, completely controlling the action but unable to find an opportunity to finish the bout.

In the second, Escudero began to turn things around, using a potent right hand to tag the Brazilian several times, even knocking him down midway through the stanza. The Arizonan continued to have success early in round three, but Santos got back on the board with a takedown. Moving into the mount and then taking Escudero’s back, Santos turned up the heat as he sought a rear naked choke, and though he didn’t get it, he did pick up the round and the win. 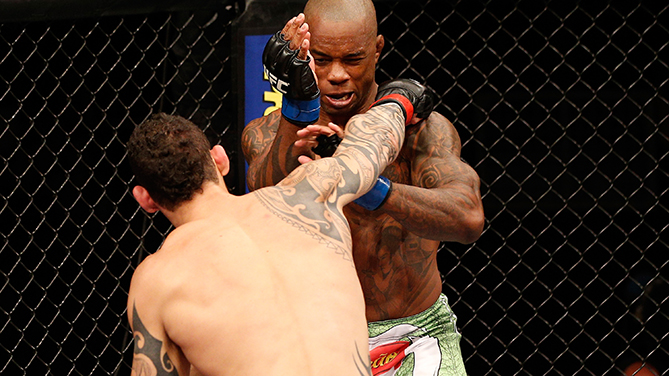 Neither fighter took any time getting to know each other, and that was the wrong call for Oliveira, as a left hook by Ponzinibbio rocked the newcomer and that was all she wrote, as a follow-up barrage continued to sink his ship, with referee Mario Yamasaki halting the bout at the 1:20 mark.

With the win, Ponzinibbio improves to 20-2; Oliveira falls to 24-8.
ALCANTARA vs. DOANE

Both fighters got after it after the bell, with a quick exchange leading into a trip to the canvas. Alcantara (31-5, 1 NC) nearly finished the bout with a rear naked choke, but the Brazilian let the hold go when it was clear that Doane (14-4) wasn’t ready to go home yet. With two minutes gone, Doane got loose and reversed position, and while the pace dipped, the Hawaiian was able to capitalize with some hard ground strikes. With a minute left, Alcantara got to his feet, but the fight was briefly stopped due to a low knee by the Para product.

Alcantara’s left kicks and punches were his most effective weapons in round two, but 90 seconds in, Doane was able to get the takedown. The busier fighter was Alcantara, even though he was working from the bottom position. With a minute left, referee Jerin Valel restarted the action, and a confident Alcantara began to light Doane up, but the resilient Honolulu native responded with a takedown before the bell.

Doane took Alcantara down in the second minute of the final round, drawing boos from the crowd. He stayed busy and kept the pressure on, looking for a choke in the process as well. Alcantara defended well and even reversed late, leaving the judges to make the final call.
ANDRADE vs. PACHECO

The Brazilian bantams traded strikes to kick the bout off, but Andrade changed the location of the fight quickly, taking the unbeaten debutant to the mat, where she fired off punches and sought a guillotine choke as she changed from position to position. With under a minute left, Andrade sunk in the guillotine choke a second time, and this time, there was no escape for Pacheco, who tapped out 4:33 into the fight.