Piotr Hallmann: A Year to Remember

"I think experience is important, but it is not everything. I stay focused and do what I have to."- Piotr Hallmann 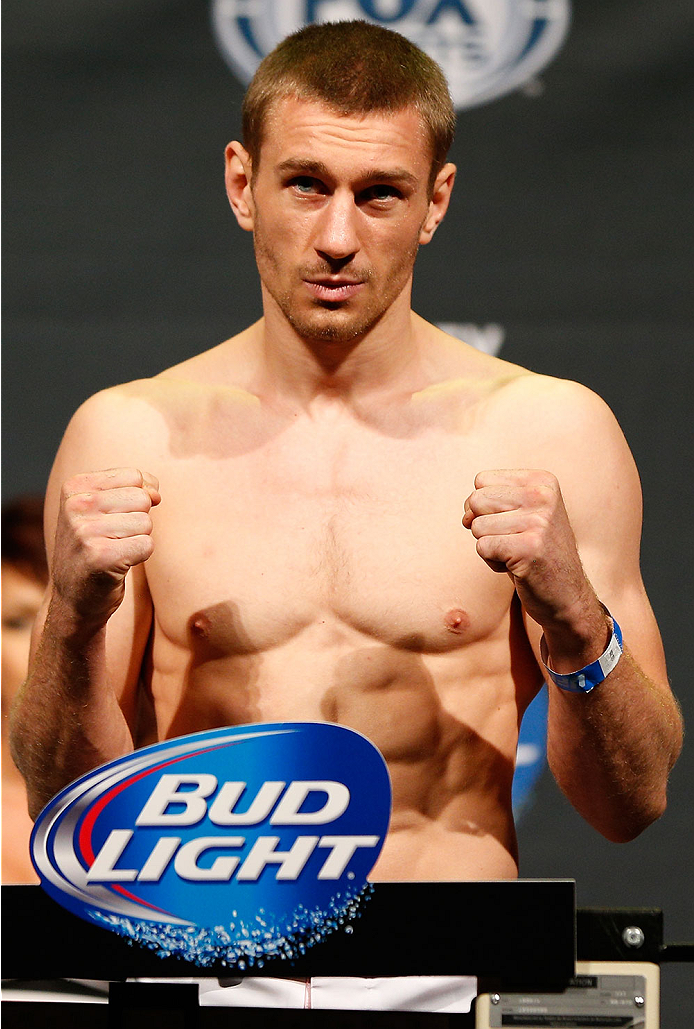 After a UFC debut last year that saw Piotr Hallmann come from behind to defeat veteran Francisco Trinaldo in the Brazilian’s backyard and pick up Submission of the Night honors in the process, the chatter around the exciting newcomer centered on his talent and his day job as a lieutenant in the Polish Navy, with the most prevalent question being a simple one:

Imagine how good he would be if he could do this full-time?

Two fights later – a decision loss to Al Iaquinta and a Performance of the Night submission of Yves Edwards – Hallmann can answer that question this Saturday in the UFC Fight Night co-main event against Gleison Tibau.  And while Hallmann is still in the Navy, he’s not putting in the 65 hours a week he used to, so now he can consider himself a full-time fighter.

“I’m really focused on my UFC career,” he said. “I have the support to be able to stay focused one hundred percent. I’m a full-time UFC fighter. It is my passion and full-time job.”

This is where the members of the lightweight division start to take little steps backward, opting to ignore phone calls from UFC matchmaker Joe Silva because the 27-year-old from Gdynia is that horrible style matchup for anyone to fight. He can strike, he can submit you, and when it comes to heart, he’s never out of a fight until it’s over. Add in that he doesn’t have a big name yet, and Hallmann is a shining example of a high risk / low reward opponent. That doesn’t concern him though; he’ll simply answer the bell whenever his number is called, and you’ll know what you’ll get every time.

“I’m just motivated and I put my heart into every fight,” he said. “For me, it is obvious to leave my heart in the Octagon.”

That philosophy has led him to 15 wins in 17 pro fights, and while it hasn’t allowed him to make a huge splash on the international scene yet, he is leading the way for fighters from his home country to make the move to the UFC.

“The sport has grown a lot in the last couple years,” Hallmann, a pro since 2009, said. “I really see it, and more and more people are starting to train and compete. I m sure there will soon be enough to fight in my home country, and that is my dream.”

Poland has always been a country that has supported its combat sports athletes, with boxers like Tomasz Adamek and Andrew Golota drawing huge crowds, not just at home, but in the United States and elsewhere. If there’s a Polish fighter on a card, you can expect that the local community will come out to support him or her, and that’s a comfort for those like Hallmann.

“It is a great feeling to have my native fans cheering for me,” he said. “They are one of the reasons I’m doing what I'm doing and they have a big share of every one of my successes. I take strength from them and they are my motivation.”

Knowing that wherever you go there are people in your corner is a boost not many can claim, and while the Polish population may not be too strong in the site of Hallmann’s next bout in Brasilia, Brazil, “Pletwal” is fine with being the out of towner, having beaten Trinaldo in Brazil and Edwards in the United States.

“To be honest, for me it doesn’t matter,” he said. “In the Octagon it is just man against man and I'm aware of that. I stay so focused on my opponent and my corner that I don't even notice anything else. It is simple, but that is the truth.”

So when he steps in with the man who has the most lightweight division wins in UFC history on Saturday night, it’s just business as usual.

“I think experience is important, but it is not everything,” Hallmann said. “I stay focused and do what I have to. Obviously I have to fight with more experienced fighters if I just have one year experience in the UFC.”

But what a year it’s been for Piotr Hallmann, who is just getting started.

“I consider it as a great time,” he said of his first 12 months on the UFC roster. “It was an opportunity to start MMA as a job, and not only a passion and because of that I improved more than any time before. And despite the fact that I lost one of my fights, joining the UFC was the greatest thing in my MMA career thus far.”