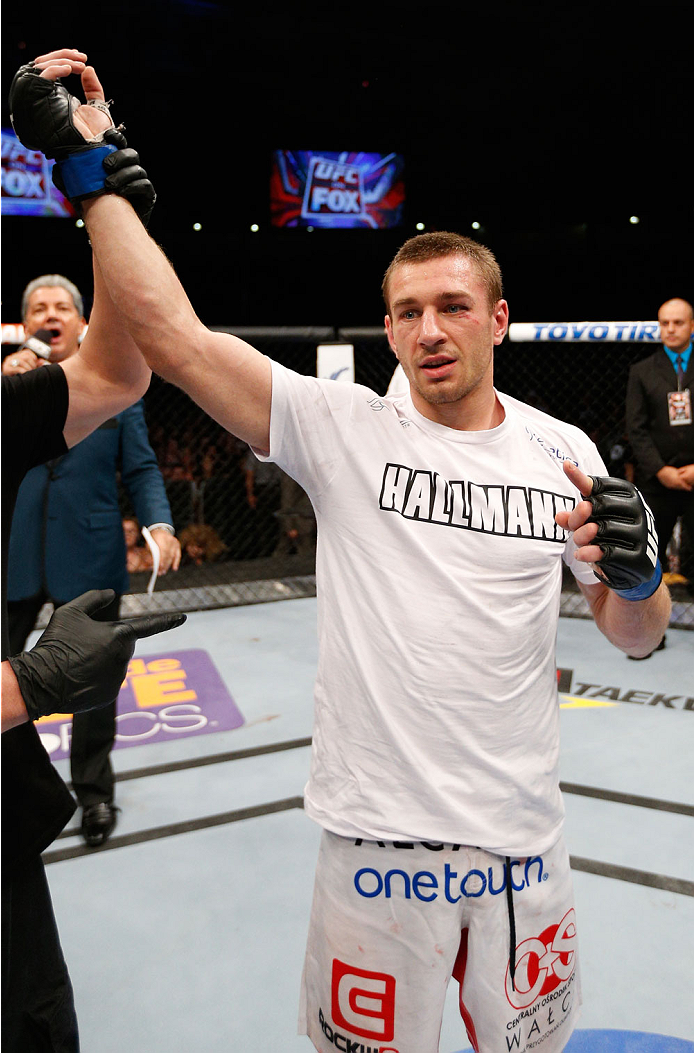 If not for some bad luck, Poland’s Piotr Hallmann could be 3-0 in his last three bouts instead of 1-2 as he heads to Sao Paulo to face Alex Oliveira this weekend in a pivotal lightweight bout for the 28-year-old.

But worrying about what could have been won’t help him defeat his opponent on Saturday, and no one knows that better than he does.

“I’ll keep positive no matter what,” he said. “I just love fighting. I love to be in the UFC and I know it’s all gonna change now.”

A Submission of the Night award winner against Francisco Trinaldo in his first UFC bout in September of 2013, Hallmann was 14-1 after that victory and looking for even bigger and better things in what many consider to be the toughest division in the sport. But when you’re in that environment, all it takes is one little thing to go wrong and a victory turns into defeat.

A little over a month after the win over Trinaldo, Hallmann jumped back into the Octagon and lost to Al Iaquinta. In June of 2014, he picked up another post-fight bonus, this one for Performance of the Night after submitting Yves Edwards. And while a split decision loss to Gleison Tibau in September of 2014 earned him Fight of the Night honors, he forfeited that bonus after testing positive for the banned substance drostanolone.

That hit Hallmann in the wallet, but it was also a blow to his reputation, and he vehemently denied any wrongdoing, pointing to issues with the testing process in Brazil. Ultimately, the verdict stood and he was suspended for nine months. And when presented with a bout in Brazil against Oliveira, he didn’t hesitate to take it.

“Not at all,” Hallmann said. “I love the Brazilian fans and the atmosphere during events there is unlike anywhere else. I left what went wrong behind me and learned from that. Next time, if there will be a mess like last time, I’ll just record evidence with my phone and notice that everything is in the correct form. I felt safe, I knew I was clean and because of that I didn’t stay careful. I was just not aware that misconduct like this could happen.”

With the suspension in the past, Hallmann made his return in June, but a good fight with newcomer Magomed Mustafaev ended in abbreviated fashion after Hallmann was cut, prompting a stoppage that he didn’t agree with.

“I’m sure the stoppage was too early,” he said. “I see it as the result of a lack of experience of the doctor who was working that day. Of course it was tough to lose - it is never easy - but it made me even more hungry for a win.”

That hunger brought the Gdynia native to Thailand, where he has changed up his training routine and found a new spark in a career that began in 2009.

“I have everything I need there,” Hallmann said. “The facility is great. I do my conditioning in Unit 27, which is really great. They have great coaches, an awesome facility, and on top of that, after hard training I can go to the Muscle Bar to get the healthy food I need. My fighting preparation I did in Unit Technical Fight Factory with a full-sized cage and the best coaches, Roberto Flamingo and James McSweeney. I m really grateful for the help I received from the gym and my coaches. Thailand itself, with great weather and food, is also an environment that helps with your performance.”

Hallmann will get to show off the new version of himself against Oliveira, a tough veteran with an unorthodox style that can throw off any game plan. But “Pletwal” is unconcerned with what any opponent brings to the Octagon on fight night.

“I don’t want an easy fight,” he said. “He (Oliveira) has a great, physical style, but I’m confident that I can overcome that. I’m really looking forward to this and, it’s not gonna be a boring fight.”

“I want to fight with the best and I don’t care who they put in front of me,” Hallmann said. “I’m a fighter. I’m hungry to fight and, for sure, after my fight I’ll be looking forward to another one.”