Pineda Motivated by a Past Slight and His Future Promise

"I don’t like losing and that’s one thing nobody wants to do." - Daniel Pineda 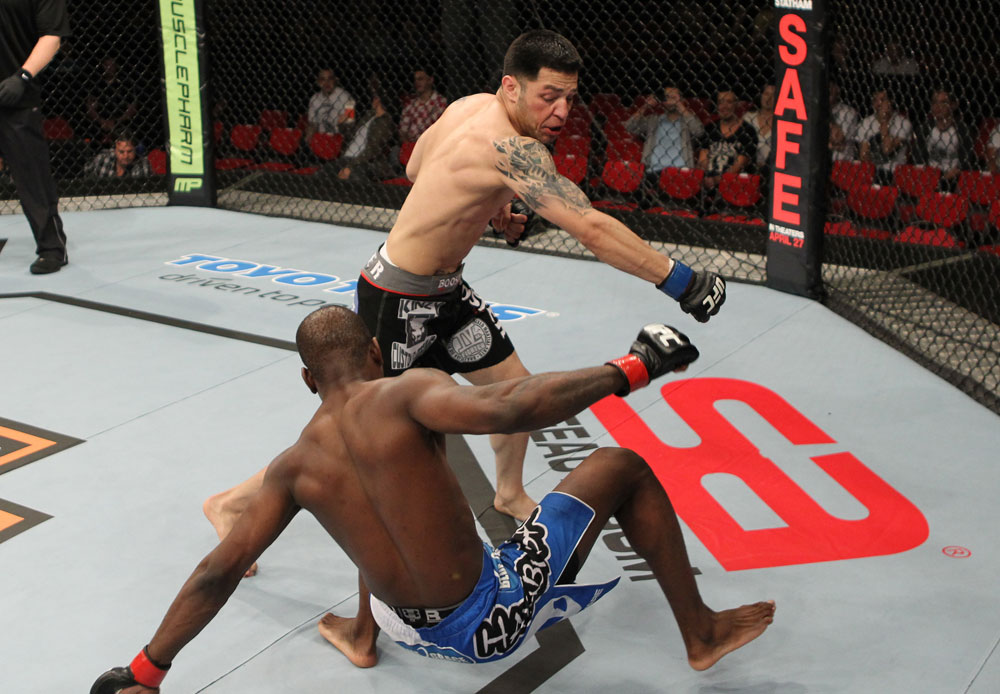 With the majority of his mixed martial arts wins coming by way of submission, including back-to-back tap outs of Pat Schilling and Mackens Semerzier in his first two UFC bouts, Daniel Pineda could be mistaken for a lifelong jiu-jitsu practitioner, and not a guy who used to think “it was better just to punch somebody in the mouth and get them out of there quicker than trying to get somebody’s neck.”

But by late-2009, a promising career had turned into something else for the native of Dallas, Texas. In 2008, he tried out for season nine of The Ultimate Fighter, assuming that his 6-2 record and finishing instincts would earn him a place on the reality series. That didn’t happen.

“I had a good record, and I was like ‘if I didn’t make it with that, I’m never gonna make it,’” said Pineda. “So I stopped caring.”

Not that he stopped fighting. He kept accepting bouts and kept showing up, but after upping his record to 8-2 in the immediate aftermath of the TUF tryouts, he lost four in a row, three by submission. At 8-6, he was now on the road to journeyman status, or even worse, ‘opponent’ status.

“I knew I had to do something because I was getting tapped out,” he said. “I was a wrestler and all I did was take people down and pound them, and I knew in my mind that I had to work on my ground and do some standup. So I started standing up, I did the ground game, and I just picked up on everything. Then once I started getting submissions, I was like ‘oh man, this is pretty cool.’”

Crediting his family, his brother (and Strikeforce vet) Jose Santibanez and standup coach Bob Perez for getting him motivated again and keeping him in the sport, Pineda turned a corner. He went on a streak where he won seven of eight, all via KO or submission, and in January, he got the call to compete in the UFC’s featherweight division.

First up was unbeaten prospect Schilling, and if Pineda was nervous in his 97 second submission win in Nashville on January 20th, he didn’t show it.

“Knowing that I was there where I wanted to be, it took my nerves away,” he said. “When I fight in Houston (his current hometown), I always get nervous because I didn’t want to let anyone down. But in Nashville, I didn’t know anybody.”

But the world watching knew him after the impressive debut, and March, the BJJ purple belt made it two in a row in the Octagon, as he finished Semerzier with a triangle armbar in just over two minutes. Now that failed tryout in Chicago is just a memory.

“I made it to the interview but never got called back, and that put me down a lot,” said Pineda, 17-7, of TUF 9. “So when I made it to the UFC and made those two statements, I feel like I’m telling you ‘yeah, I could have made it.’”

One memory that hasn’t faded is his previous losing streak. In fact, that may just be what’s pushing the 26-year old to new heights as he awaits his UFC 146 assignment against former WEC featherweight champ Mike Brown this Saturday.

“I think about that a lot. It’s still in the back of my head and it’s not gonna go away. I don’t like losing and that’s one thing nobody wants to do.”

It’s been over two years since he saw someone else’s hand raised in a fight, and now, there’s no talk of losing from Daniel Pineda, only of winning and getting in position to become a featherweight contender, then a title challenger, and finally, a champion.

“I think if I beat Mike Brown come UFC 146, I think I should be (a contender),” he said. “But first we have to beat Mike Brown, and then we can see. But that is my goal, and it’s everybody’s goal – to get the belt. That’s what I want.”