Pilarte prepared to leave his mark 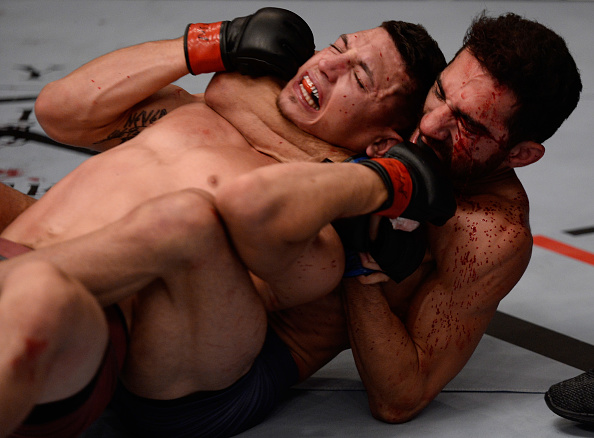 Dom Pilarte is a man of faith. And through all the ups and downs of the fight game, he trusted that one day that faith would be rewarded. Then came his July 17 bout with Vince Morales on week five of Dana White’s Tuesday Night Contender Series, and he wondered just what test would he have to pass next when he got hit right on the eye by his opponent in the first round.

“I said, ‘This is gonna be an issue,’ and I tried not to think about it,” said Pilarte, who saw a strong start vanish with that right hand. “I was just hoping they wouldn’t stop it. My equilibrium was fine and I wasn’t wobbling or falling over. He got me in a good position against the cage, but they weren’t clean shots.”

As the first frame ended, Pilarte was bloodied and he probably lost the round on the judges’ scorecards thanks to Morales’ furious finish. All of a sudden, Pilarte’s dream fight was turning into a nightmare.

It wasn’t like he hadn’t been here before. An 8-1 pro, the 28-year-old Pilarte began training seriously when he was 15, took his first amateur fight three years later, and by 19, he strapped on the gloves professionally for a 2009 win over Adolfo Ortega. The way the Houston product saw it, he was just a few fights away from the big show.

“In my mind, I would have been 5-0 or 6-0 and got the call,” he said. “At that point, 19 years old, I thought I was ready to compete at that level and I was good enough. I thought I could. I had no idea it was gonna take me another nine years.”

That’s the nature of the fight game. There is no linear path to the UFC. It’s not like the NFL, where 99 percent of the athletes go high school, college, NFL. In MMA, you can have a handful of fights and make the right impression at the right time and get your shot. Or, you can fight in obscurity 20 times before even getting on the UFC radar. Or, you can be Dom Pilarte, somewhere in the middle. And it’s no fun being in the middle. But he believed that his patience would get him through.

“To be a hundred percent honest, it goes back to my beliefs and my background,” he said. “It really was God that was making me wait and he taught me how to be patient and really grow as a person. I believe he made me wait this long because he didn’t want me there, where I couldn’t handle the fame, the money and all the things that come along with being a successful fighter. Looking back, I was definitely not ready for the UFC, even back in 2009.” 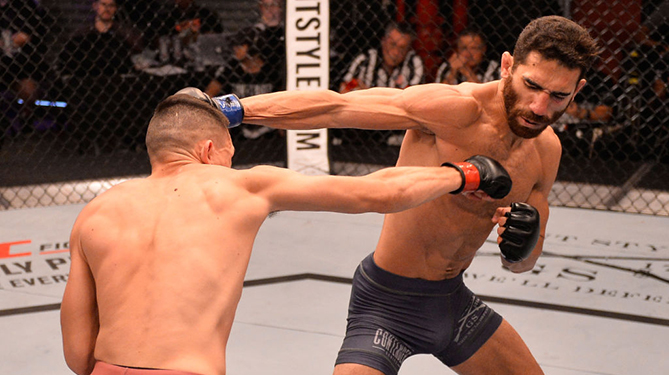 He can say that now. Back then, it was tougher to deal with.

“It was extremely difficult at times,” Pilarte said. “I couldn’t live a normal life. I was still going to school part-time, so I finished school late. I didn’t want to work full-time and I couldn’t work full-time because I was training five days a week and that’s all I wanted to do. I knew I would get in and I didn’t know how long it would take, but I knew I was good enough and I just wanted to keep training.”

And he kept winning, bouncing back from a 2014 loss to Caio Machado to win four in a row and get the call for the Contender Series. Now all the southpaw had to do was right his ship against Morales. It was the biggest test of his career, and one he embraced, especially knowing that with everything on the line, he had to do something that would leave an impression.

“Fighting in front of Dana White, in front of Mick (Maynard), in front of Sean (Shelby), it’s nerve-wracking,” he said. “I’ve seen other fighters that were on the Contender Series and they had highlight-reel knockouts and didn’t get a contract. I knew I had to perform and go all out and leave it all out there, so I was a little more offensive-minded and a little wild. I needed to make it exciting, and you can’t give something up without a consequence. So I got caught with some counter shots I usually don’t get caught with, which was fine. I was prepared for it.”

As round two began, Pilarte made no question of his intentions. He was going to put his jiu-jitsu purple belt to work, and on his second try, he got Morales to the mat and went to work. At 1:52 of the second round, a rear naked choke ended Morales’ night, and Pilarte was a UFC fighter.

“Better late than never” would describe this journey best, and Pilarte would agree, not just for himself, but for a team of coaches and teammates that have never wavered in their belief that he would one day be a UFC fighter. Saul Faz, Jeff Messina, Daniel Pineda, and Pilarte’s twin brother David were in Las Vegas that night for the Morales bout, and the emotional response to the victory by “Son of Fire” was there for the world to see.

“They believed in me when I didn’t believe in myself,” Pilarte said. “They always encouraged me, always pushed me. They shared in it, and not only for me, but for them, it was all the years of their hard work that they put into me. It was like a Rocky story win for everybody. It was really amazing to finally make it.”

And now that he’s here, Pilarte plans on leaving his mark.

“I can one hundred percent say that not only am I ready to be at this level, but I’m ready to come into the bantamweight division and go for gold,” he said. “I still have the same passion for this that I started with when I was 15. I made a promise to myself that I would not rest until I became a UFC world champion. And 13 years later, I’m here. It’s all been timing. I’ve been patient and I’m glad to finally be here.”