Pierson's Not Waking Up From This Dream Yet

"I can’t imagine the energy that’s gonna be in the crowd there for us, and I just hope to be able to put a great show on for everybody and obviously come out on top." - Sean Pierson 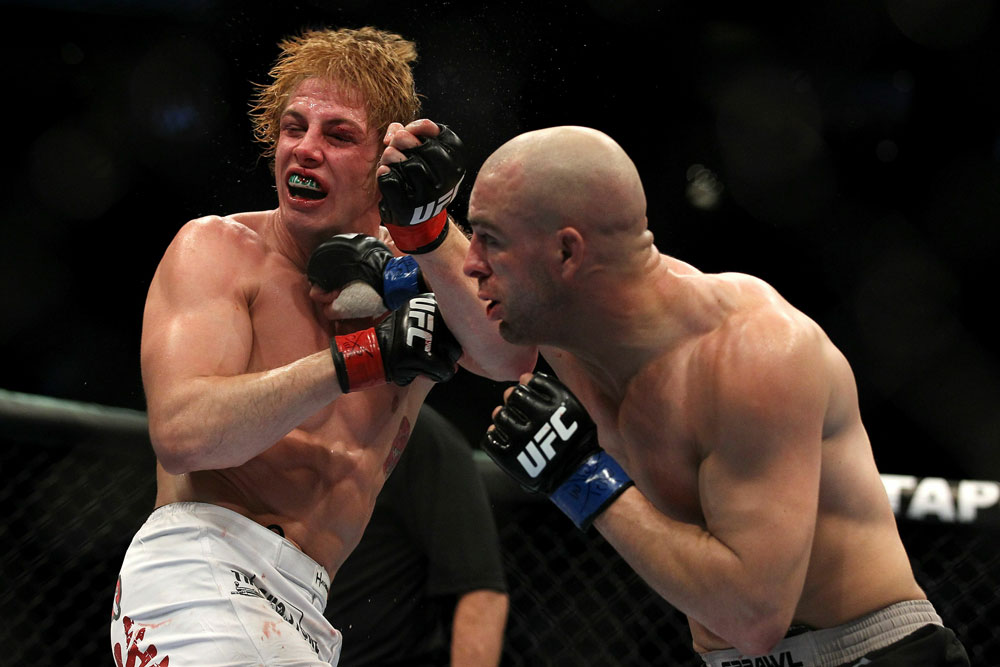 Some fighters say that being in the UFC Octagon for the first time makes you feel like your heart just stopped. Sean Pierson felt like his was beating out of his chest.

“In that first round, I came out and was like ‘let’s fight, it’s go time,’ and that’s usually my style,” said Pierson of his UFC debut againstMatthew Riddle last December. “But after the first round, my heart rate was going 300 kilometers an hour still and I’m not calming down. Three quarters of the way through the second round, I said I better start pacing myself because Matt is not gonna be an easy guy to put away, and his cardio looks like it’s doing pretty well here.”

Yet there was little let-up from the Ontario native during his action-packed three rounder against Riddle, and that’s not surprising, especially when fans at Montreal’s Bell Centre started getting behind their fellow Canadian.

“Midway through the second round, I could hear my name being chanted throughout the arena. That was a crazy feeling. It took a second to realize that ‘oh, they’re chanting my name.’”

Hollywood couldn’t have written a better script for that night in Quebec, as the local hero does good on the big stage after over a decade of blood, sweat, and tears waiting for his opportunity. Sean Pierson was finally a UFC fighter, and with his three round unanimous decision win over Riddle (one that UFC President Dana White believed was the best on the UFC 124 card), he guaranteed that he would remain one.

Needless to say, the crowd cheered on.

“At the end of the fight, when me and Riddle shook hands, I could see that we were getting a standing ovation, and to know that that many people appreciated what you just did or how you just performed in the Octagon is an amazing feeling,” said Pierson. “If that was my only fight and last fight ever, I would have been satisfied and I wouldn’t have given it away for anything.”

That wasn’t Pierson’s last fight, and if anything, it gets better, as he will fight on this Saturday’s UFC 129 card in his hometown of Toronto. After 12 years as a pro, it will be his first fight ever in his home province, and it’s in front of a record crowd of 55,000 to boot.

“Obviously I think about it, and then I think ‘how do you even prepare yourself for that?’” he asks. “I couldn’t even prepare myself for the UFC in Montreal. As much as I thought about what it would look like, when you get out there, it’s different. The crowd’s crazy, they’re loud, they’re cheering for you and maybe being my first fight it was a little more difficult, but I just got excited and thought ‘this is amazing.’ Now in my hometown, I know personally thousands of people that are gonna be there, so I can’t imagine the energy that’s gonna be in the crowd there for us, and I just hope to be able to put a great show on for everybody and obviously come out on top. It’s gonna be a great experience for everybody involved.”

And an emotional one for the 35 year old, who has seen the good times, bad times, bright lights and dark days since he turned pro with a first round TKO win over Steve Vigneault in October of 1999. Back then, Pierson just assumed that the sport that he loved would soon be sanctioned in his home province. But it was far from that easy.

“When I started 12 years ago, I thought it would be three or four years and for sure Ontario would have it,” he said. “12 years later and it’s finally here. There were a lot of hoops that everybody jumped through, but again, you can’t look back; you just look to the future and say ‘it’s here now, let’s put on great shows and show Ontario why it’s here and it’s here to stay.’”

It’s as optimistic as spin as you can put on the situation, but it’s really the only way to approach it. Pierson can’t go back in time and get the sport sanctioned and see where it takes him. He can only deal with today and then tomorrow. And with that kind of attitude, it made it easier for him to accept the news that his original UFC 129 opponent, Brian Foster, was being removed from the bout for medical reasons and that highly-regarded Jake Ellenberger was stepping in on short notice.

“I could lie and say it doesn’t throw a monkey wrench into things, but it definitely does,” he admits. “I’m training no matter what; that’s a given. But we put gameplans together and my training is specifically for a certain kind of fighter. Now when I get a new opponent, those strengths and weaknesses might change. A lot of little things can flip on you when you change opponents, but again, it’s the fight game and I just gotta keep training as I do and move forward. We’ll just strategize and come up with something new.”

Luckily, he’s not training with a bunch of weekend warriors at the local gym. He’s at the renowned Tristar Gym, home to UFC welterweight champion Georges St-Pierre and a seemingly never ending cast of world-class coaches and fighters. As an example, a Twitter post from Pierson a couple weeks back talked about his day of sparring, which included rounds with St-Pierre, rising star Rory MacDonald, and veterans David Loiseau and Denis Kang. Now that’s a day of work or torture, depending on how the rounds go.

“When you first look at the rounds, you’re like ‘oh, this is nice,’” laughs Pierson. “I think it was Rory first, then we had a K-1 kickboxer with me second, and then Georges third, and I’m saying ‘there are no easy rounds here. When am I getting my break?’ (Laughs) But it’s great because after you’re done, especially if they’re competitive rounds, you say if I can hang with these guys, I could hang with anybody. It’s really a good confidence booster and we learn a lot from each other.”

What Pierson doesn’t need to work on, and that’s because he already has it built in him, is the type of class that is prevalent among the competitors in the mixed martial arts community. For all the talk over the years of this being a violent sport occupied by those craving such activity, the truth is that the fighters in MMA are just like any other pro athletes – the craving is for the competition that the sport provides, not a desire to hurt anybody. It’s why, when Pierson heard of Foster’s withdrawal from their bout, the first call he made was to the man he was scheduled to throw punches with to offer his condolences and wish him the best for a speedy recovery.

“I’ve been saying it for years – I don’t fight, I compete,” said Pierson. “I just compete against my opponent and in no way want to make it where he can’t support his family and do what he loves to do. I have no ill intent toward my opponent other than me trying to win the fight. Whether that’s by knockout, submission, or decision, I’m just in there to compete and show off my skills the best I can and at the end of the fight I just want to shake hands, meet the guy afterward and say ‘great job, good luck with your next one.’”

Sean Pierson’s “next one” is this Saturday. And if his heart doesn’t beat out of his chest in excitement, expect him to use every ounce of it to deliver the win he’s been waiting to produce for 12 years.