Pierce Hopes to Make Up for Lost Time 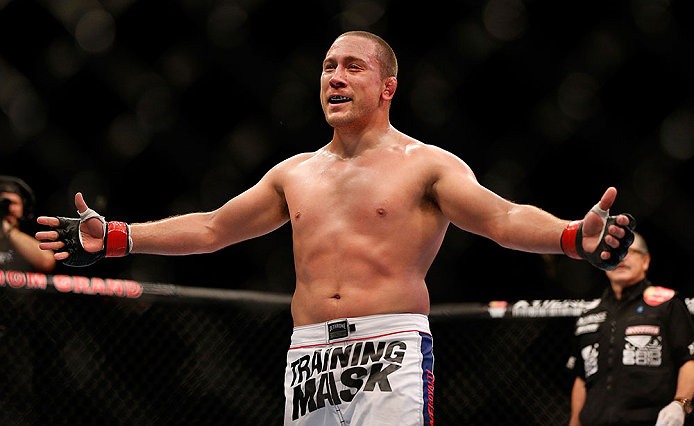 No one who saw it will ever forget Mike Pierce’s last UFC appearance. Caught in the first round by leg lock master Rousimar Palhares in October of 2013, Pierce was in agonizing pain as he tapped out to a heel hook, but as has been his custom, the Brazilian held on.

The result was that Palhares got his walking papers from the UFC for his unsportsmanlike act and Pierce went home with a torn ankle ligament and sprained MCL.  It was the kind of injury that could make anyone gun-shy about engaging in the grappling game ever again, but as soon as he healed up, Pierce didn’t just get ready to come back, he agreed to do it against jiu-jitsu master Demian Maia.

“I've never been given any easy road in the UFC and I've never tried to go that route either,” Pierce said. “My second fight in the UFC was Jon Fitch. (Laughs) I've never gone the easy route or begged for an easy opponent, so when Demian Maia came up as a suggestion as a guy that was ready to go, I was like 'I'll do it, I don't care, I'm ready.'”

That’s a fighter. And as Pierce explains, his reasoning was simple – if he beats Maia, it’s five wins in his last six fights and some noise making in the welterweight top ten.

“Demian was a good matchup for me because he was a top ten guy, he's got decent wrestling, decent striking, and the one thing that I thought that I excelled at more than him was the cardio, but it depends on what Demian Maia shows up,” he said. “There are times when he can go five, five-minute rounds, and times where he starts gassing in the second round and there's nothing left in the third for him. So it seemed like a good opportunity to jump back in there with him, so I didn't think twice about it.”

His body had other ideas though, with a broken hand scrapping the Maia fight and keeping the Oregon native on the sidelines even longer. On Friday, he finally returns to the Octagon to face Ryan LaFlare. 26 months later.

Pierce was on the right track before his two years of hell. Having already faced the likes of Fitch, Johny Hendricks and Josh Koscheck, Pierce began hitting his stride in 2012, and knockouts of Aaron Simpson and David Mitchell were part of the four-fight winning streak that brought him to Brazil for his ill-fated fight with Palhares. Then everything fell apart, and surprisingly, Pierce believes that dealing with the broken hand was the worst injury of the two.

“The Palhares thing only took a couple months to really kind of baby through,” he said. “So that wasn't as big of a deal. I was able to bounce back a lot quicker from that. And so I didn't have to be as patient with it.”

He had to take his time with his hand though, and luckily, his lifetime of wrestling gave him the mental toughness to get through.

“Most of my mentality is along those lines of doing whatever I have to do to get through it as quickly as possible and with as little risk as possible too,” he said. “I didn't want to refracture this thing or have any bumps and bruises along the way, so I tried to play it as smart as possible. Man, I just had this desire and passion to get it done as quickly as I could because I hate being injured. It's the only broken bone I've ever had and it was an agonizing setback to see teammate after teammate go through camps and fights and I was sitting on the sidelines waiting for a stupid little bone in my hand to heal so I could do it again.”

But now he’s back, and while the man at the top of the class has changed from the last time he stepped into the Octagon, it’s still a tough division at 170, albeit a wide open one.

“GSP (Georges St-Pierre) leaving left a lot of openings for people,” Pierce said. “Johny Hendricks had the title for a short while, then Robbie Lawler got it and he obviously had a giant war with Rory MacDonald. But there are lot of places for guys to rise to the top here. All those guys are pretty much neck and neck. There's not one feared guy like 'oh, that's the guy. He's the Anderson Silva of the welterweight division.' I think there's a lot of opportunity to be the better person on a particular night.”

So where does Mike Pierce fit in?

“I'm going right for the top,” he laughs. “That's where I'm heading. I want to get this fight over and done with and end it as quickly as possible and then start looking to get back to where I know I need to be.”