Pierce Bringing a New Intensity to Rematch with Bradley

"I want to get in there with an agenda, put pressure on this guy and
break him down. That's what I want to do, and that's what I'm looking to
do in this fight." - Mike Pierce 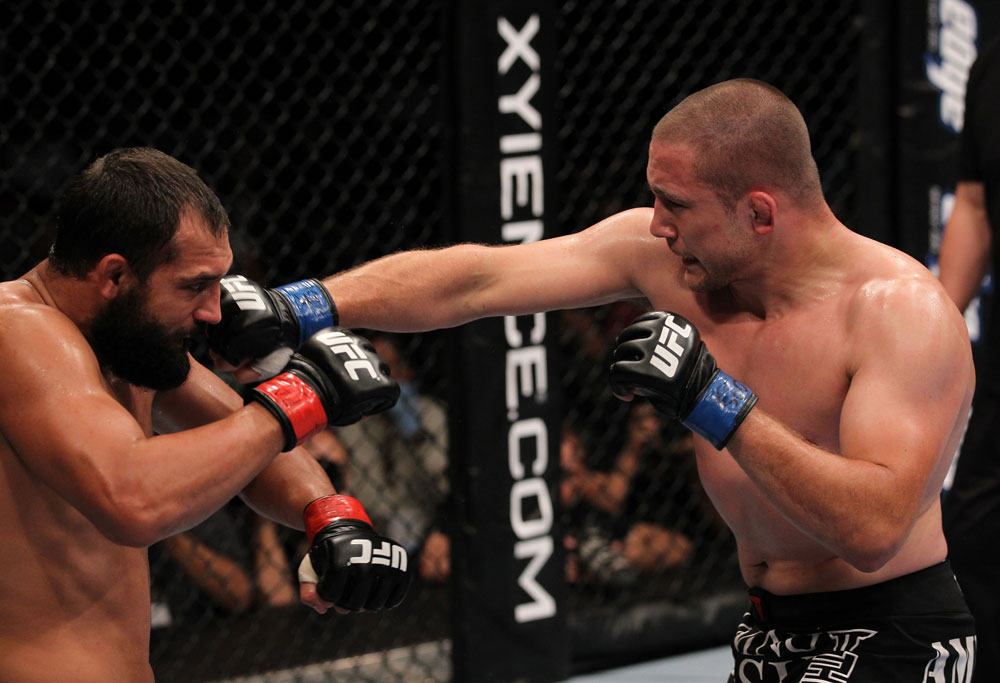 It’s the rematch we’ve all been waiting for. The original bout captivated a nation and caused an indelible rift between opposing parties, which is still present to this very day. It’s the act two that the fans have clamored for and it’s the fight UFC welterweight Mike Pierce has pined for since the moment the first ended. It was inevitable and it’s now finally upon us: Chael Sonnen vs. Anderso... just kidding.

Of course, I’m referring to Pierce’s own rematch with Paul “The Gentleman” Bradley on November 12th at UFC on Fox with a little overestimation of the surrounding facts. Truthfully, Pierce is excited for both fights, as he wants to get back to his own winning ways and he wants to see his longtime friend get another shot at the UFC middleweight title.

The 31 year old Oregonian grew up on the same wrestling mats that Sonnen did at the Peninsula Wrestling Club in Portland. Under the watchful eye of Coach Roy Pittman, the two learned the takedowns, the scrambling, the toughness and the attitude that both still employ to this day inside the Octagon. As genuinely as he is looking forward to the possible Sonnen/Silva II, Pierce’s mind is solely focused on one thing: beating Bradley worse than he did the first time.

“For this fight specifically, I want to be that guy I was in the third round versus Johny Hendricks or Jon Fitch,” asserts Pierce. “I want to be that guy who really throws caution into the wind and says I don't give a s**t and I just want to really rip this guy's head off. It doesn't mean you're going in there like a wild man and dropping your hands and throwing wild punches. It means that I want to get in there with an agenda, put pressure on this guy and break him down. That's what I want to do, and that's what I'm looking to do in this fight.”

It’s a gameplan that Pierce knows very well, and he has executed it to perfection in his UFC wins over Brock Larson, Julio Paulino, Amilcar Alves, and Kenny Robertson. At 12-4, Pierce’s losses inside the Octagon have come in two tough decisions against Jon Fitch and, most recently, Johny Hendricks in August at UFC 133. But in those battles, Pierce showed tenacity and a pointed attack in the third round that possibly could have finished both fighters if Pierce had only flipped that switch on earlier.

“I think when your back is against the wall you can do one of two things: lay down and give up or say screw it and give it all you've got,” states PIerce. “I'm not one of those guys who lays down and gives up. In those third rounds specifically from those two fights, I felt that I needed to do something at that point because I hadn't done enough. So, I just gave everything I had to try and win. I don't want to let it get to that point. I've been working hard in this camp to turn it on a lot sooner. You have to have faith in your conditioning because if it is not there then you can't do it. The conditioning workouts I go through are hellish, and it's just a matter of getting in there and saying I have to do this and actually doing it. My camp has been pretty focused around doing that and making sure the pace and the intensity are high from the get go, so I can break these people down.”

The split decision with Hendricks was a grueling three round war between very well matched opponents. It is becoming the new UFC trend, putting strong wrestlers against each other in the Octagon and watching them slug it out with brutal, thudding standup. Pierce and Hendricks traded fists, feet, elbows, knees and dirty boxing without giving an inch, but rarely shot for a takedown. Despite the loss, it was a solid performance by Pierce, where he showed his ability to get stronger as the fight went on and, again, that he could match wrestling skill sets with vaunted former collegiate All-Americans like Hendricks.

“It was hard for me to see the silver lining because I was just really pissed off after the fight,” admits Pierce. “I know I can beat him. I was just not into the game that night. Chael was in my corner and after the fight he was saying there is a small silver lining in this even though I might not see it now. He had talked to Joe Silva afterward and he said that Joe really loved that fight and he said that was 'Fight of the Night' until the Rashad Evans and Tito Ortiz fight. And I was like, 'No! That was a bonus I could have had. Thanks for making it worse (laughs).' But as long as the bosses love it and I go out there and put on a show and fight my ass off, that's what they're looking for guys to do. They're not looking for guys to lay and pray, evade or run around the Octagon. They're looking for guys to engage and fight. This is a business where people are supposed to fight and that's what I did and they're happy.”

Up next for Pierce is the November 12th rematch with “The Gentleman”. Back in 2009 on the humble local MMA circuit in Pennsylvania, a relatively unknown 7-2 Pierce was scheduled to tangle with the 2x NCAA division I All-American from the University of Iowa, Bradley, who was also undefeated in his MMA career. The main event bout was set for a catchweight of 180 pounds as Bradley is typically a middleweight and Pierce a welterweight. At the time, Pierce was a heavy underdog against Bradley and it was that adversity that drove him to win.

“I knew he was going to be a strong wrestler with a similar fighting style,” says Pierce. “I just wanted to go out there and do anything I could to just break this guy down. I didn't care if this was a submission, a TKO or whatever - I had one intention and that was to get my hand raised at the end of the night. It didn't turn into a wrestling match. It was definitely a striking match in that first fight we had. I landed a lot of leg kicks, I out struck him, I pushed him up against the fence, and I popped off some dirty boxing. It was one of those things I was fighting in his hometown at the time, he was undefeated, and even the promoter came up to me after the fight with his jaw dropped and was like 'You had to know that no one thought you had a prayer in Hell in beating this guy. The odds were completely stacked against you.' I was like yeah, but if I had that mentality going into it then I wouldn't have had a chance. You can't go into these things, even when it seems the cards are stacked against you, and lay down and give up. I went in there with a goal in mind and came out of it doing what I wanted to do.”

Fast forward two years later, the tables have turned, the shoe is on the other foot and Pierce is the favorite. As opposed to their first fight, Bradley is the underdog, with Pierce having much more experience in the UFC with Bradley making his debut in the Octagon at middleweight at UFC 133 where he lost a decision to Rafael Natal. Now, Bradley will be cutting 15 pounds to make welterweight, where Pierce regularly fights. They’re both better fighters than they once were, but Pierce does know what it takes to beat Bradley, and this time he will have the metaphorical home-field advantage of fighting inside the Octagon.

“My own personal confidence is that I beat this guy once before and I did it in a dominating fashion,” affirms Pierce. “I beat him 30-27 across the board, in his hometown and he's a 2x All-American out of Iowa. He knows that my wrestling is where it needs to be and he knows my striking is where it needs to be and I've only gotten better since then. I don't think he believes I'm going to be the same guy on the 12th that he fought two years ago. I kind of like that.”

To prepare for the fight, Pierce has been training at either end of Portland with the Sports Lab and at Portland Thai Boxing with Jeremy Wijers. “My main coach is Phil Claud, who is also my conditioning coach,” says Pierce of Claud, who is most famous for his coaching at US Olympic Training Center and his own time as a professional cyclist on the USA national team. “I've been training with guys like Nate Quarry, Dave Jansen, a couple other up and coming pro guys. It has been a good camp so far and I'm ready.”

On November 12th in Anaheim, California, Pierce and Bradley will throw down for the second time, but this one will be in the Octagon. “I have one goal and one particular agenda that night and that is to win,” declares Pierce, who not only wants to get back into the winning mix of the UFC welterweights, but he wants to stay undefeated against his former foe - “The Gentleman”.