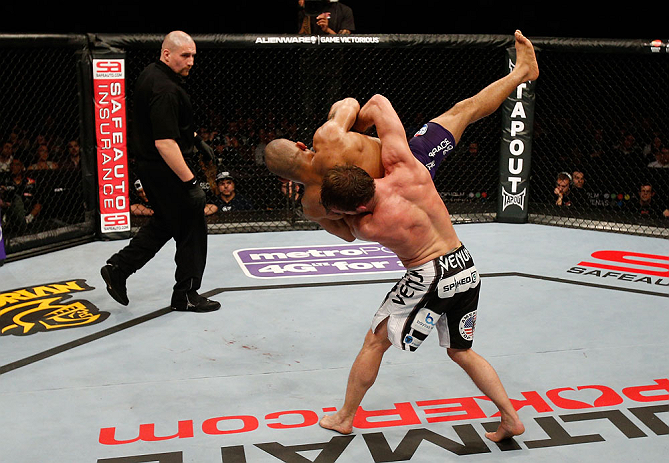 August 17 in Boston promises to be a crucial night for the bantamweight division, not least for England’s Brad Pickett who can take a giant step towards a title shot.

The Ultimate Fighting Championship® launches on FOX Sports 1 at the TD Garden, with a stacked card headlined by the light heavyweight encounter between former UFC® champion Mauricio “Shogun” Rua and Chael Sonnen.

However, a significant sub-plot to the main event centres upon the 135-pound terrain, where four hugely talented individuals will attempt to put their names forward for title contention. Former WEC® champion Urijah Faber takes on Yuri Alcantara – who has lost only one of his last 15 bouts, while Pickett squares off against Michael McDonald – coming off a loss to interim champion Renan Barao.

For Pickett, his long-term wish has been answered. The Brit has been determined to face a high-ranked rival in order to scale the rankings, and by fighting McDonald he has the chance to beat the #3-ranked bantamweight in the UFC.

Pickett is currently 24-7 in his MMA career and 3-2 in the UFC, having twice had his run to a potential championship bout derailed – first by Barao and then Eddie Wineland. The Brit is coming off a Fight of the Night victory over Mike Easton and will have the advantages of both momentum and experience over his opponent.

McDonald (15-2) faces a fresh challenge after his February 16 defeat to Barao, having previously been undefeated in the UFC. Like Pickett, the 22-year-old likes to keep the fight standing, landing 80 per cent of his strikes while on his feet.

With reigning champion Dominick Cruz now cleared to start boxing sparring following a long-term rehabilitation period from injury, the bantamweight division is beginning to gain renewed impetus, so the victors on August 17 stand to place themselves in a strong position to contend for the ultimate prize in the near future.