Pickett Saving His Best for When It Matters Most

"My job is to go out there and fight, so all I can do is go out there
and win my fight and try to do it in good fashion, and if I do that,
I’ll always go in the right direction." Brad Pickett 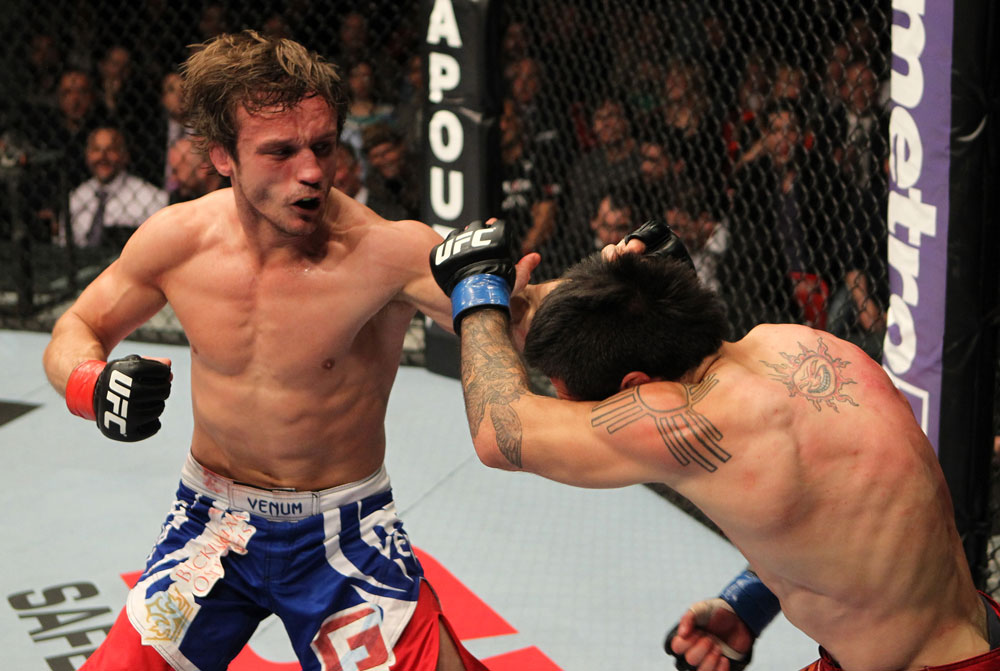 “I don’t think I’m a really great trainer,” he admits. “I train very hard but I don’t do really well in training. I come alive when it’s the real deal, when you’re fighting. I’m better when it really matters. And mentally, I’m better at dealing with that than some people are.”

We’ve all heard the stories of gym killers who wreck everyone in sparring and look like world-beaters, but once the bright lights are on, they’re average at best. Pickett is an example of the reverse phenomenon. When it’s practice, he practices, working on his weaknesses without a care as to how he may look to anyone on the outside. But when it’s time to perform and there’s a check on the line, he delivers.

Every time. Win or lose.

Heading into his Saturday matchup with Canada’s Yves Jabouin, Pickett has fought six times under the Zuffa banner (four WEC / two UFC). He has four post-fight bonuses, including Fight of the Night in each of his UFC bouts. His only defeats were in Fight of the Night battles against current interim bantamweight champion Renan Barao and Scott Jorgensen, and among his victories is a 2010 win over newly crowned flyweight champ Demetrious Johnson.

That’s not a bad resume to have, and it explains why Pickett is seen as one of the top 135-pounders on the planet after just two UFC bouts. That’s a lot of impact in a short time.

“From fighting for the WEC, which, to me, was the best in the world for my weight class, then coming to the UFC, it’s the same thing, but it’s a much bigger audience,” he explains. “So if you fought well within the UFC, obviously you’ll skyrocket a lot faster.”

And he has. One of the last WEC vets to debut in the Octagon, Pickett fought Barao at UFC 138 last November and what resulted was a fight that had more action in 4:09 than most have in 15 or 25 minutes. When the smoke cleared, Barao had submitted Pickett via rear naked choke in his home country of England, but the Brit lost nothing when it came to stature within the division.

You couldn’t tell him that though, and as he got ready for April’s match with Damacio Page, he was feeling the heat, at least internally.

“It’s the pressure I put on myself,” he said. “I’m not in this sport or in the UFC just to make up the numbers; I want to be somebody. So to do that, you need to keep winning, and when you suffer defeat, it’s tough, but it can happen to anybody. But two defeats in a row is gonna keep you on that slippery slide, and three defeats and you may be zapped, basically. So it’s definitely important to win. Obviously you need to be exciting, but you also need to win as well.”

He won, submitting Page in the second round in Sweden and picking up another post-fight bonus check. He finally had his first UFC win, but his bucket list still has some entries on it, one of which he could scratch off this weekend if he beats Jabouin.

“It was an added bonus getting the Fight of the Night and performing like I did (against Page), but for me, it was really critical just to get that monkey off my back and get that first win in the UFC,” said Pickett. “Now I’ve got a new and different monkey on my back and I want to get my first UFC win on home soil after my first disappointing outing. So that’s in my sights now – I definitely want to win in the UFC in my home country.”

To get it, he will have to get past one of the division’s most underrated talents in Jabouin, who is unbeaten in three UFC fights since moving from featherweight to bantamweight. Pickett knows what he’s in for.

“I think he’s a very, very good athlete and you can see that,” he said of Jabouin. “Technically, he has some of the best standup in the bantamweight division. He was tough at 145, and he’s unbeaten at 135. He’s a very tough opponent, and I don’t think he’s got a lot of credit for how tough he is at my weight class. So I’m expecting a very tough fight, I’m prepared for that, and it should be a very exciting one as well.”

And while a win marks him as a legitimate title contender, if you’re playing fantasy matchmaker, Pickett could move up even faster with champion Dominick Cruz on the sidelines due to injury and interim titleholder Barao now in the mix. If Barao decides to defend the interim belt before Cruz returns, Michael McDonald may be next in line, but who wouldn’t want to see a rematch between the Brazilian and Pickett, given the fireworks of their first meeting? But “One Punch” isn’t getting involved in that side of the business just yet.

“That’s not my job,” said the Londoner. “My job is to go out there and fight, so all I can do is go out there and win my fight and try to do it in good fashion, and if I do that, I’ll always go in the right direction. That’s my important job to do that. I don’t want to get caught up with thinking too far ahead and lose focus with what’s in front of me now.”

That’s Yves Jabouin, in Nottingham, England, with a chance to win for the first time at home as a UFC fighter. Just like the first time, Pickett can’t wait.

“It’s weird, but when I fought Barao, I didn’t have any nerves,” he said. “I tend to think I may have been a bit overconfident maybe, I’m not too sure. I felt really relaxed and comfortable, and I was really super charged and that’s probably why I went so crazy. (Laughs) In a way, I hope that the atmosphere’s the same but I just hope the outcome’s different.”