Pichel lets his work speak for him 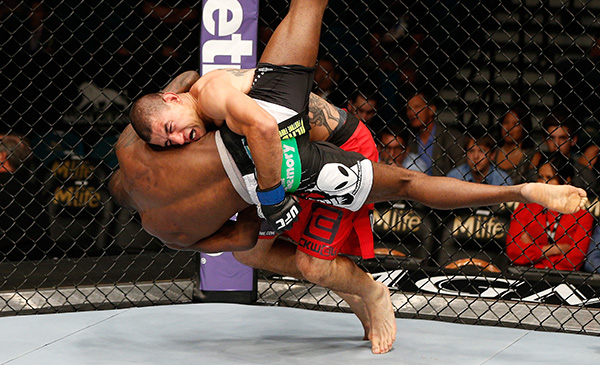 Vinc Pichel (top) wrestles Anthony Njokuani to the ground during the UFC 173 event on May 24, 2014 in Las Vegas, NV. (Photo by Josh Hedges/Zuffa LLC)" align="center" /> As UFC President Dana White told a crowd in Boston about featherweight champion Max Holloway being undefeated since 2013 and interim lightweight champ Tony Ferguson doing his thing without a defeat in nearly six years during a press conference last week, Vinc Pichel could have just smiled, knowing that with over five years since his last loss in 2012, he’s in good company.

But Pichel was at work, getting ready for his opportunity to extend his unbeaten run this Saturday against Brazil’s Joaquim Silva. And even if he was watching, he’s not the type to harp on such matters. 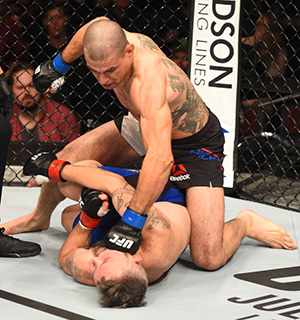 Damien Brown during the UFC Fight Night event on June 11, 2017 in Auckland, NZ. (Photo by Josh Hedges/Zuffa LLC)" align="left" />“I’m the type of person that will keep quiet and do my thing, and I’ll let my work talk for me,” he said. “In the back of my head, I know if I talk about it, it will get me more notoriety, but I’m just not that way.”

Pichel’s fists are loud enough to speak volumes, and while being sidelined for three years did add to the longevity of his streak, when he came back last June and knocked out Damien Brown in less than four minutes to win his third straight bout, it’s evident that if he was active in 2015 and 2016, there’s no reason why he couldn’t have kept the wins rolling.

But oh, what a Hollywood ending to his first fight back.

“It was, to a tee, honestly,” said the Simi Valley product. “I’d been out a long time and it felt good to be back, and to end the fight the way I did, it was an extra bonus, like the cherry on top. It was all amazing. It feels good to be back again.”

Honestly, no one could have expected such an effort from the 35-year-old Pichel after so much time away, but his coach on The Ultimate Fighter, Dominick Cruz, has famously said that he doesn’t believe in ring rust, and apparently, neither does Pichel.

“The one thing that I was worried about was cutting weight because I hadn’t done that in years,” he laughs. “I didn’t know how my body was gonna react to it and I didn’t know how I was going to be able to handle it. That’s the toughest part of the job for me and there’s a lot of mental stability you need for that kind of thing. But my weight cut actually went really, really well.” 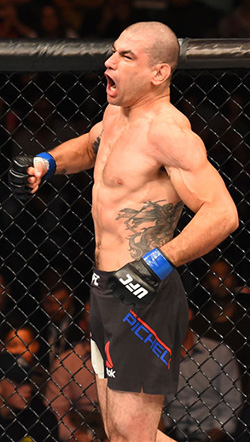 The rest, he’s done that for years, but it was when he took a 7-0 record into the TUF house in 2012 that his game evolved, both mentally and physically.

“I took away a lot from that show,” he said of TUF’s only live season. “I learned a lot training wise and I learned a lot about myself. It gave me a lot of wisdom being on there. Would I do it again? I don’t know. But I did learn a lot from it and I wouldn’t take anything back. On that show we had a lot of good, talented guys – (James) Vick, (Al) Iaquinta, (Michael) Chiesa, myself. The guys that are continuing to fight in the UFC are excelling and I do attribute a lot of that to being on the show and of course to training with the champion, Dominick Cruz, and his team and learning from them.”

And to think, Pichel wasn’t even thinking about fighting in the UFC when he showed up.

“Honestly, I didn’t even want the UFC contract,” he laughs. “I wanted the Harley.”

He didn’t get the Harley, losing to Iaquinta in the semifinals, but he got his call to the UFC, bouncing back from a loss to Rustam Khabilov to defeat Garett Whiteley, Anthony Njokuani and Brown. Now he just wants to beat Silva, stay active throughout the rest of 2018 and maybe get a little payback along the way.

“I got this fight with Joaquim, I’m gonna knock Joaquim out just as dirty as I did Brown, get some more notoriety and I’ll see who the UFC gives me next,” Pichel said. “But I want to fight Al Iaquinta because he beat me on the show.”