Pichel 'born to be a fighter' 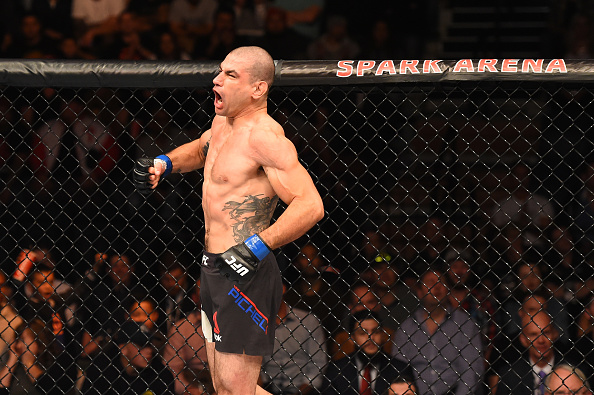 Vinc Pichel celebrates after defeating Damien Brown of Australia in their lightweight fight during the UFC Fight Night event at the Spark Arena on June 11, 2017 in Auckland, New Zealand. (Photo by Josh Hedges/Zuffa LLC/Zuffa LLC via Getty Images)" align="center" />
If life went according to the usual order of things, Vinc Pichel probably shouldn’t be where he is right now, in a co-main event against Gregor Gillespie and riding a four-fight winning streak that includes two wins compiled after a three-year layoff. Did I mention that he’s also doing this at the age of 35?

So does it feel a little satisfying to be that 30-something guy beating the young kids on fight night?

“Honestly, yes,” Pichel laughs. “In my eyes, how embarrassing is that for them? There’s a saying, ‘Beware of an old man in a profession where men usually die young.’ So I gotta lot in fight in me. Even now, I’ve been taking care of my body a lot more and I don’t feel like I’m 35. My mentality is that I’m still in my mid-20s. I just have that mindset of being young at heart, and I’ve always been young at heart. So it feels good.”

Pichel also doesn’t have a lot of mileage on him. He only has 12 pro fights, and he just started training in 2007. Take away the three-year layoff, which he admits saw him out of the gym for at least two of those years, and he’s the freshest 35-year-old you’ll find in the fight game.

“A lot of the guys, especially the younger ones, have already been training longer than me,” he said. “And I started in 2007 with no experience. I never wrestled in high school, I never took kickboxing or karate. I was just a tough little son of a bitch that could throw a helluva punch and had a knack for fighting.”

That knack for fighting could have taken Pichel down the wrong path. But even when it did get him in trouble, he never lost his love for it.

“Ever since I was a little kid, I always wanted to fight,” he said. “I saw the movie ‘Bloodsport’ and I said I want to be in the Kumite, and I want to be Frank Dux. I want to be the guy that beats everybody, the king of the hill. And for the longest time, my mom was like, ‘No way, I’m not putting you in any kind of fighting.’”

Pichel found his way to it anyway, though it wasn’t until he began training that he started putting his talent for scrapping to good use. And when he was about to turn pro in 2009, he let his mom in on the news. In turn, she gave him his nickname.

“I told her, ‘I’m gonna be a professional fighter. I’ve been training a year and a half. It’s gonna be my job, my career, and I’m gonna make something of myself.’ She started laughing and said, ‘What’s your nickname gonna be, ‘The Pichel from Hell?’”

Pichel laughed it off, told his friends and his coach, and they all agreed that the name fit. So when he made the walk for his first fight, he was Vinc “From Hell” Pichel.

“It made my hair stand up, it made me excited and it made the devil come out of me,” he recalled. “It felt like home. And it stuck.”

Now it would have been better if his mom gave it to him because he was a little terror as a child, right?

“I was a little terror,” he laughs. “I was an aggressive, mean little bastard. I always meant well, but if someone rubbed me the wrong way, I had this knack of making them regret it.”

These days, he’s making opponents regret it if they underestimate him. And if he hands Gillespie his first pro loss in Utica on Friday, the lightweight top 15 may have to make room for the Californian. That would be another chapter in an already compelling story, but one Pichel is still writing.

“When I’m doing interviews or people are asking me questions that don’t know about me or know who I am, that’s what makes me think about all this stuff that I’ve done and accomplished,” he said. “I’m such a ‘go, go, go’ person that I don’t ever really get a chance to just sit there and bask in my glory. (Laughs) To be honest, I’ve always gotta work so much harder for the next one and the next one and the next one. So a lot of times I don’t think about it. I just do my thing and don’t really think about that stuff until someone reminds me. All I can say is I’m just a grown ass man living the dream a little version of him dreamed about when he was small.”

“I’m a born fighter,” Pichel said. “I wasn’t made a fighter; I was born to be a fighter. So when I got into fighting, it was almost like my dream finally came true. But I had to work for it myself. I was never handed anything, never had any opportunities given to me. I worked for everything and this is just my hard work paying off. I’m the kind of guy who will just keep my mouth shut and work my ass off and eventually I know things will come to me. And that’s what’s happening right now.”