Phillips ready to break through at UFC 202 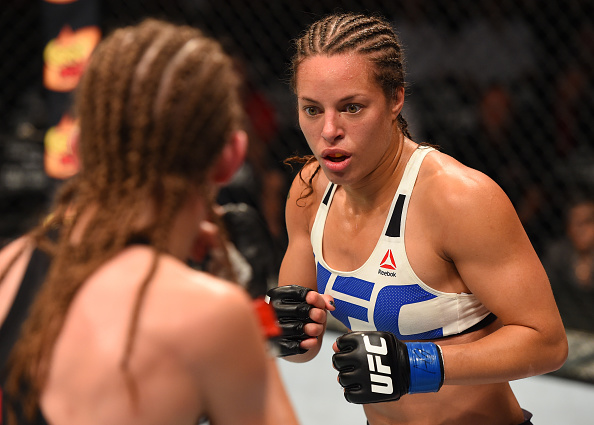 And when she does respond, it’s without hesitation. So while she appreciates the attention that comes with being a professional mixed martial artist on the UFC roster, it’s not the be all, end all of her existence. Not by a long shot.

“It’s nice having people come up to you and say, ‘Hey, I want your autograph, you inspire me.’ That’s a great feeling,” she said. “But as long as I could make a living out of it and pay my bills, if there was no one around and I could just go to a warehouse and do this, absolutely, one hundred percent, I would do it.”

As UFC veteran Josh Neer once put it so succinctly – and accurately – some of his peers like signing autographs more than the fight. Phillips is not one of those folks.

“It’s in my blood to be a fighter,” she said, and that’s not a quote made for Tweets. It’s real, and though Phillips can more than handle herself when the gloves are on and the mouthpiece is in, everything else has been a little tougher for the 29-year-old from Spokane.

“It is hard to get used to,” she said. “Nobody writes these scripts on how to deal with the media and how people talk to you and treat you like (expletive) and criticize you all the time. It’s hard. And I’m from a very small town of 5,000 people and I’m not used to all this Las Vegas, big fancy hanging out with stars and things like that. It’s been a rough ride for me to learn, but I am enjoying it and I’m starting to warm up to it a little bit. Very slowly.”

As Phillips gets ready to head to Vegas to face Raquel Pennington at UFC 202 on August 20, it’s a bit surprising that she hasn’t embraced the spotlight more, or perhaps that the spotlight hasn’t fully embraced her.

“I’ve been considered the rebellious one, and my whole life it’s been like that,” she said. “Doing what I want, saying what I want, and that’s put me in a position to where I’m not always the favorite. Unfortunately, that’s how it is.”

Then again, that’s a lot of the reason why Phillips is an intriguing fighter. So break it down: She can fight, she’s got a great story, and she can tell that story. It’s a trio of attributes that is almost a prerequisite to be a part of Rick Little’s Sik Jitsu team, at least among the Fab Four that represent the squad in the UFC: Phillips, Julianna Pena, Michael Chiesa and Sam Sicilia. And while the quartet is made up of distinct personalities, they share a common goal that they’re all chasing together.

“Our team is very unique, and it’s not one of the bigger teams,” Phillips said. “We’re in a small, hole in the wall type of place and we’re always considered the underdogs. We all have strong personalities and we’ve clashed, but we’re all close at the same time, and we’ve all been able to come together and support each other. And that’s what makes us stronger. Even though sometimes we fight, we always stay loyal and we always back each other up.”

And as Phillips makes abundantly clear, she believes that there is no other place for her in the MMA world.

“I really don’t think I would be successful if I went anywhere else,” she said. “This is where I was raised and this is what I know. It’s not conventional and it’s not the same as a lot of different places, and I take pride in that. I really do believe that this very rare and unique place was definitely made for me. I don’t think I could go anywhere else.”

“Rare and unique” could be a good description of Phillips, who bounced back from two controversial decision losses that started her UFC career to defeat Jessamyn Duke in July of 2015. Elbow surgery didn’t allow her to immediately keep the momentum going, but she gets a chance to crash the bantamweight top 15 if she can beat the No. 8-ranked Pennington.

If that happens, there will be a lot more media attention, a lot more fans, and a lot more autographs to sign and pictures to take. Is Elizabeth Phillips ready for Sunday Morning?

“I am prepared for Sunday morning,” she laughs. “I’ve thought about it over and over in my head, and I’m more relaxed this fight, I don’t feel as much pressure, and I feel like it’s a really good matchup for me to show off my skill set. I think a lot of people are underestimating me and don’t know much about me. They think I’m just a wild brawler and they couldn’t be more wrong. I think I’m definitely going to go out and get a finish and it’s really going to be an upset, so anyone who’s betting on me is gonna make a lot of money.”